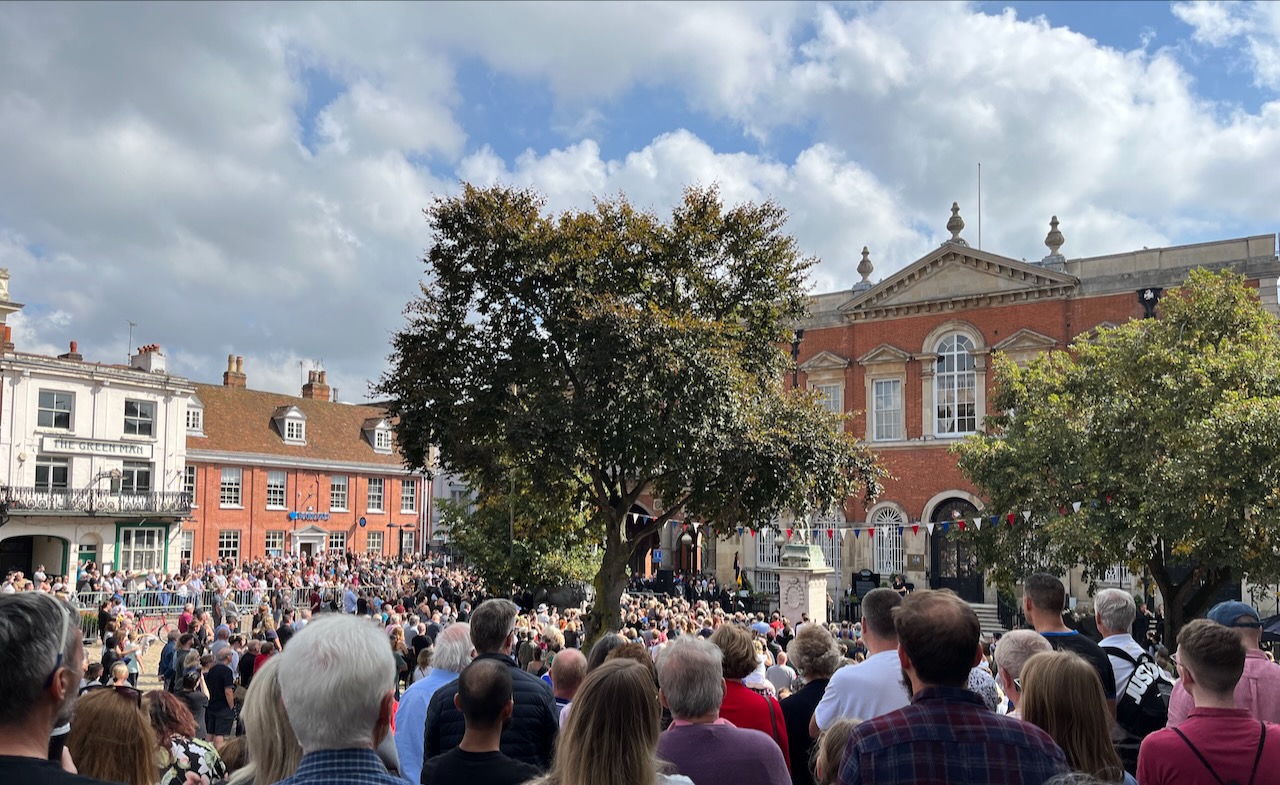 As with most Britons alive today, there hasn’t been a change of the UK’s Sovereign in my lifetime. Not any more. I don’t follow that branch of the entertainment industry known as ‘The Royals’ and I have no particular affection for its various actors. Most of them strike me as charmless or gormless or both. But I think the system of constitutional monarchy has served this country well, all things considered. I like it that we have a head of state in the UK who’s independent of political parties, lobby groups, and financial donations. The monarch unites the nation in a way no elected president ever could.

The Crown is not just a symbol of the nation in unity, but of continuity, stability and tradition. A symbol, in other words, of the simple things, the understandable things, the relatable things. The things that radicals, progressives, and leftists sneer at and want to abolish, along with the monarchy itself.

I went to my local market square to see the Proclamation of the new Sovereign. It’s a ceremony that’s been held in towns and cities all over the United Kingdom in recent days, and it’s just the kind of event that republicans love to mock as outdated and comic. It’s all a bit of a joke, a bit Gilbert & Sullivan, a bit cringe, actually. Other countries don’t have this nonsense, they’ll say, as if being the same as other countries is a end in itself.

Of course, most of us there didn’t think it was cringe. We gave three cheers for the new king and sang the national anthem. This being the county town of Buckinghamshire, there were mayors from all over the county who came to take copies of the proclamation back to be read to their own citizens. Just as happened in 1952, when Elizabeth II became queen, and just as happened before with preceding monarchs. This kind of ceremony may be archaic and faintly daft, but I found it comforting and moving.

Metaphysical monarchists will tell you that the Crown and the person who wears it should not be conflated. Still, it seems that the monarchy’s popularity since 1952 has, with a few wobbles, been due to the personal qualities of Elizabeth II. She became queen when she was just twenty-five and effectively began with a clean slate. Charles III is seventy-three and begins with several slates’ worth of incidents which cast him a poor light.

The Royal aides have been trying to manage the mainstream media for decades now, with mixed results. They haven’t a hope in hell of managing social media. The ongoing William/Kate vs Harry/Megan conflict might simply have kept the tabloids and gossip columns fuelled with endless copy thirty years ago. Now it’s become another front in the culture wars.

Yes, I know — it’s the Crown, not the person. But in the social media age the personal qualities of the monarch are scrutinized as never before. I do wonder whether Charles or his successor (who can’t be that far off) will be the last of the line, especially given almost everybody under age of forty seems to think socialism is the answer to everything.

But those republicans who want an elected president as our head of state — so much more modern, so much more egalitarian — should be careful what they wish for. It could as easily turn out to be a Trump or an Erdogan (or a Corbyn, God help us) as an Obama or a Macron.

Forty-five years, ago, Anthony Lewis, a columnist for the New York Times, writing about the Silver Jubilee, compared the queen with the prime ministers who’d served under her:

Success is the real difference. Whatever it means to be a successful queen, Elizabeth is that. Her system visibly works. The ceremony glitters, a simple speech brings tears to the eyes. And so much else in Britain, political and economic, does not work.