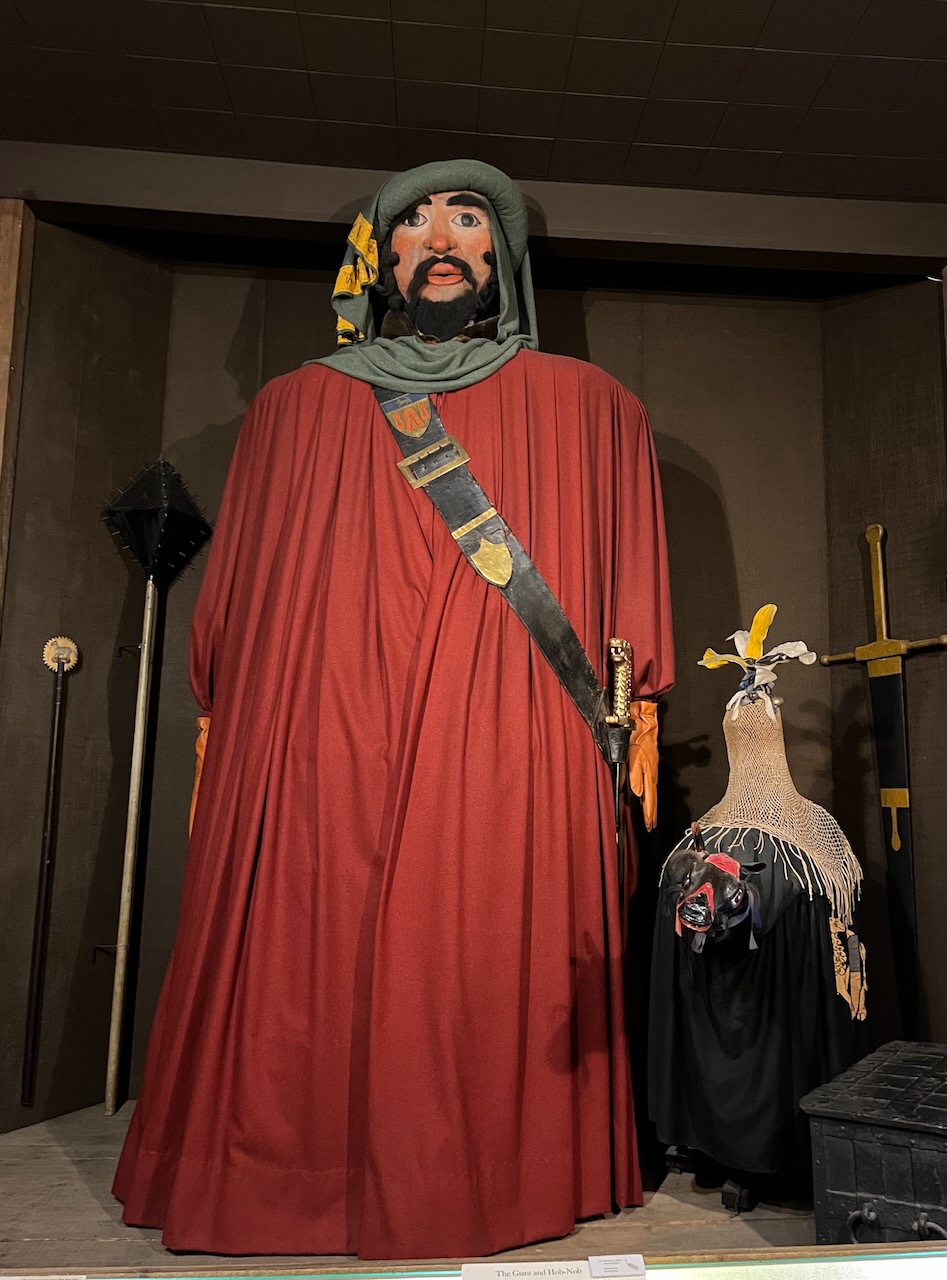 At this time the island of Britain was called Albion. It was uninhabited except for a few giants. It was, however, most attractive, because of the delightful situation of its various regions, its forests and the great number of its rivers, which teemed with fish; and it filled Brutus and his comrades with a great desire to live there. When they had explored the different districts, they drove the giants whom they had discovered into the caves in the mountains…
Brutus then called the island Britain from his own name, and his companions he called Britons…

(The History of the Kings of Britain – Geoffrey of Monmouth, translated by Lewis Thorpe)

Giants have been part of Britain’s national consciousness ever since we had a national consciousness. Three centuries after Geoffrey of Monmouth’s book was published, Holinshed’s Chronicles of England, Scotland, and Ireland, later used by Shakespeare as the key source for many of his history plays, claimed that the giant race that Brutus found here originated when a giant called Albion, a son of the god Neptune, settled here. As Brutus was to do later, he named the island after himself.

When Brutus and his Trojans took control of Albion, they didn’t, according to Geoffrey, exterminate the indigenous giants but instead sent them off into a kind of internal exile. Given how many tales of giants there are in Welsh folklore, those mountain caves might have been in Wales. And when the Anglo-Saxons arrived centuries later, they seem to have picked up on the notion of Britain as a habitation of giants, attributing the impressive Neolithic and Roman ruins they found to the giants’ handiwork.

Geoffrey of Monmouth also ascribes the original construction of Stonehenge to giants, though it was Merlin who brought the stones to their current location. In a passage in The History of the Kings of Britain, Merlin explains to the British king, Aurelius Ambrosius the origin of the stones and his plan to transfer them from Ireland to Britain:

These stones are connected with certain secret religious rites and they have various properties which are medicinally important. Many years ago the Giants transported them from the remotest confines of Africa and set them up in Ireland when they inhabited that country. Their plan was that, whenever they should fall ill, baths should be prepared at the foot of the stones; for they used to pour water over them and to run this water into baths in which their sick were cured.

(The History of the Kings of Britain – Geoffrey of Monmouth, translated by Lewis Thorpe)

The king appoints his brother, Uther Pendragon (the father of King Arthur) to lead the expedition to Ireland and provides him with an army of 15,000 men. Eventually, after trials and tribulations, and with the considerable assistance of Merlin’s magic, the stones are transported to Britain and re-erected on Salisbury Plain.

The gigantic thread is also woven into British folklore in tales such as Jack the Giant Killer and Jack and the Beanstalk. One indication of the appeal of giants to the national imagination is that the popularity of figures of giants in the parades and pageants of the medieval guilds. Many cities and large towns had their own giants, who were paraded through the streets on feast days. One of these giants survives, living out his dotage in the Salisbury Museum, along with his hobby horse sidekick.

The Salisbury Giant is first recorded in 1570, being paraded in the Salisbury tailor’s pageant. This event took place twice year, on 23 June, the eve of St John the Baptist’s day, the patron saint of tailors, and on 15 July, when the city celebrated the removal of St Osmund’s relics from Old Sarum to Salisbury Cathedral. His companion, Hob-nob, the hobby horse, gets his first mention in 1572. At some point, the Salisbury Giant got his name Christopher, after the saint who was also something of a giant, according to medieval writers. Christopher was designed to be carried by one man standing inside his wooden frame, and was able to sway, lean, and turn. Hob-nob, also with a man in his frame, was much more mobile, chasing those people in the crowds who taunted him, snapping at them with his wooden jaws lined with nails.

The Reformation led to the suppression of these Catholic processions with their pagan elements. Giants were treated as just another material expression of the old religion and destroyed accordingly. But somehow, the Salisbury Giant survived. In the 1600s, when the old guilds had been re-formed as trade companies, the Tailor’s pageant was revived, though with a strictly secular character. The procession continued on into the early 1800s, but then fell away, being re-staged only on great national occasions such as royal jubilees. In 1873, the curator of the Salisbury Museum bought the Giant and Hon-nob from the last two surviving members of the Tailors’ Company for thirty shillings.

The Giant cuts an impressive figure in his current home, standing twelve feet high, clad in his red robe and green headdress, Hob-nob at his side. Of course, the Ship of Theseus paradox applies here. Over the centuries, the Salisbury Giant has had many, possibly all, of his parts replaced. Does that mean he’s really the same giant as the medieval one? Let’s leave the metaphysics to one side. What the visitor will see when they visit the museum is a figure which has been continuously mended and amended since he was first made by those guildsmen. The parts may not all be original, but it’s the same Giant.

The oldest part of him is certainly his head, which cannot be precisely dated, but may originate from the earliest times of his existence. Then there is the wooden frame of his body, which was certainly repaired by a local firm of coach builders in 1850. His costume is recent, dating from 1982, though his baldric and wooden sword are much earlier than this.

There have been stirrings of a giant revival in recent years. The British Isles Giant Guild was formed in 1993 to ‘promote the building, operating, and maintaining of carried Dancing or Pageant giants in the British Isles’. As for the real giants, they haven’t been seen for centuries. In case you think they are all myth, legend and nonsense, the Megalithomania website has a Top Ten listing of giant skeletons unearthed in Britain, the remains, or so it’s claimed, of that ancient race of giants.

[The information about the Salisbury Giant is gleaned from the pamphlet The Giant and Hob Nob by Hugh Shortt and John Chandler, available from the Salisbury Museum.]