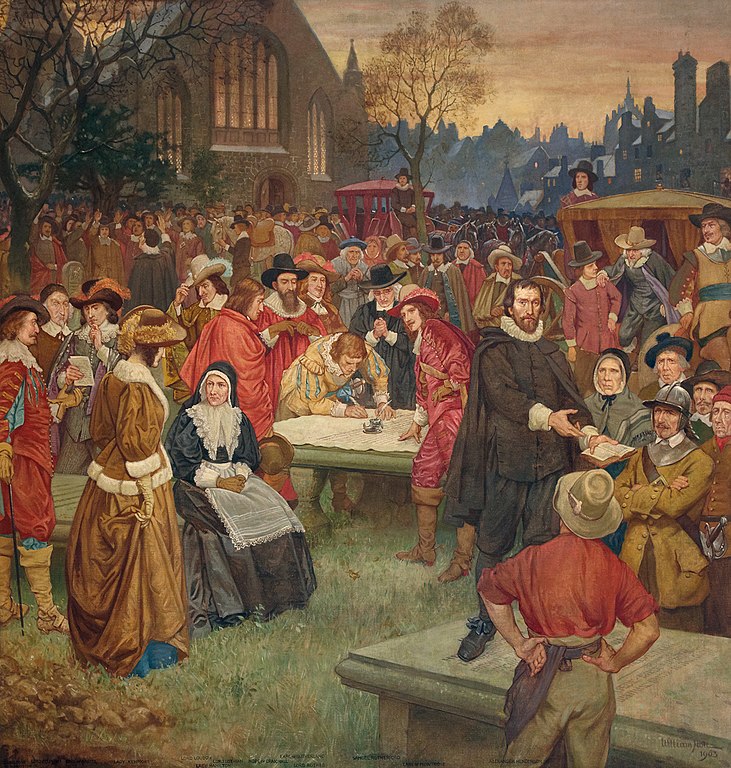 Anybody on the Edinburgh tourist trail will eventually end up in Greyfriars Kirkyard. The kirk itself was founded on the site of a Franciscan monastery in the early years of the seventeenth century. But it is the kirkyard that was the site of a critical episode in Scottish history later in that same century. The visitor arriving through the main gate from Candlemaker Row will see a board stating that here, among the graves of the illustrious dead, ‘THE NATIONAL COVENANT WAS ADOPTED AND SIGNED 28TH FEBRUARY 1638’. The key couldn’t be much lower but it was this event that made Greyfriars Kirkyard a sacred site of Scottish religious politics.

The National Covenant was created to oppose the reforms of the Church of Scotland proposed by King Charles I. It was intended to safeguard the Protestant Reformation in Scotland and to repudiate any form of royal control over the nation’s church. It is one of the foundational documents of modern Scottish nationalism. Some of those present on that February day even signed in blood. Other copies were signed by thousands of people all over Scotland. Some of those did so, it has to said, under duress and there were many who refused. None of that detracts from the Covenant’s significance.

So there it is, the special meaning of Greyfriars Kirkyard in Scottish history. And that, you might think, is why the tourists flock here. But you would be wrong, reader. For close by that modest statement on a modest board, on the ground in front of the Kirk’s east end, is a small statue of a small dog and a red granite headstone inscribed with his name. These are the grave and memorial of the Skye terrier known to history as Greyfriars Bobby.

Bobby, so the traditional story goes, watched over the grave of his master John Gray for fourteen years until his death, after which he was interred close by Gray. Though there have been many doubts about the veracity of the story over the years, it has now passed into legend. As an index of his potency, Greyfriars Bobby has two statues. As well as the one in the kirkyard there is another out on the George IV bridge. So in answer to the question at the head of this post, when it comes to fame, esteem, and global bragging rights, the Skye terrier has wiped the floor with the Covenanters.

Is this another example of the Disneyfication of the past? Certainly. But even without the benign phantom of Greyfriars Bobby hovering over the kirkyard, how many visitors, be they natives of Edinburgh or tourists, would know why the Covenanters made their stand and what was at stake? Actual history, as opposed to the Braveheart version of it, is mostly absent from nationalist discourse and the officially-santioned Scottish self-image.

It’s worth noting that the threat to Greyfriars Bobby’s eminence is now coming from another direction altogether. The kirkyard is a popular stop on the city’s Harry Potter tours. Apparently, JK Rowling got some of her character names from the gravestones. Greyfriars Bobby faced down those tough Covenanters. Can he do the same against a boy wizard?

[Image of William Brassey Hole’s painting The Signing of the National Covenant in Greyfriars Churchyard courtesy of Wikimedia Commons.]