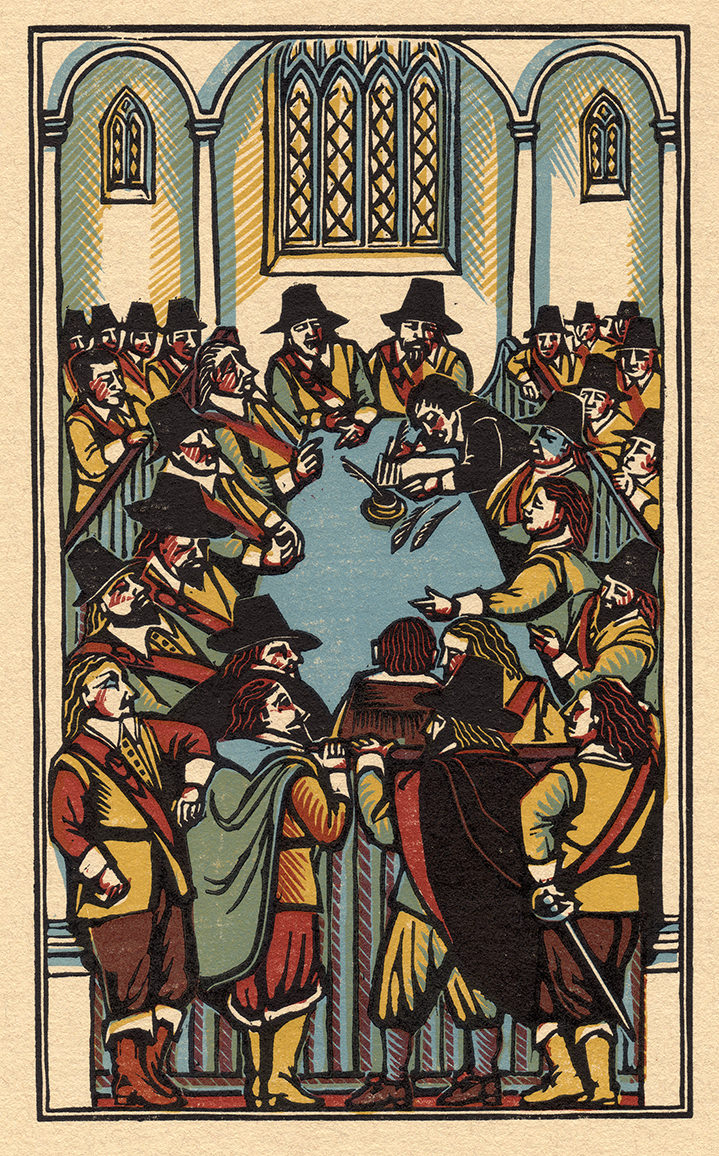 It is a curious fact that the most important debate in English political history took place not in the House of Commons but in the fifteenth-century parish church of St Mary in Putney. There, on 28 October 1647, and for the next two weeks, a group of about forty men met in informal conclave, and proceeded to invent modern politics.

(A History of the English People – Paul Johnson)

The meeting of the General Council of the New Model Army that began on 28 October 1647 took place the year after the Royalist armies had been routed in the field and four months after Charles I had been arrested and imprisoned. This army, established by Parliament, led by Sir Thomas Fairfax and Oliver Cromwell, was the new power in the land, a political as well as a military force.

The Army’s senior staff, known as the Grandees, were still hoping and groping for a settlement with Charles I that would protect the privileges of Parliament and the liberties of the landowners. In the summer of 1647, the Grandees had produced a document known as the Heads of Proposals, which set out their negotiating position. The document proposed that the king would be restored, though with circumscribed powers, parliamentary constituencies would be reorganized, the power of the bishops would be reduced, and that Parliament would control the appointment of state officials. The franchise would remain as it was, limited to property owners, that’s to say, landowners.

But Parliament, by creating a new kind of military force — politically motivated, politically aware — had not reckoned that the rank-and-file might have their own ideas about the new England that was to be created. A group of army radicals, later dubbed Levellers, produced their own document, The Case of the Armie Truly Stated, which called for the abolition of the Monarchy and the House of Lords, with sovereignty invested wholly in the House of Commons. The document also proposed that the franchise be extended to men who did not hold property and for certain natural rights, such as freedom of conscience and equality before the law, to be enshrined in the new constitution. These proposals were too extreme for the Grandees, for the existing House of Commons, and even for many in the army. But together, the Heads of Proposals and The Case of the Armie Truly Stated set the framework for the meeting at Putney.

Putney at that time was a small village by the Thames, a few miles outside London, and the place where the New Model Army was headquartered. Though the General Council meeting began at St Mary’s, it soon moved to the lodgings of Thomas Grosvenor, the Army’s Quartermaster General of Foot. That house, wherever it stood, has long since vanished and so St Mary’s is now remembered, somewhat inaccurately, as the venue of the Putney debates.

I say, ‘now remembered’, but the Putney debates remain little-known, given their significance. Even at the time, few knew of them outside of the participants and their allies within the army. Newspaper reports of the time were brief and heavily censored. This very English battle of ideas was soon forgotten, drowned out by the great dramas of the Civil War centred on the actual battle field, the court room, and the scaffold. Forgotten until 1890, when a transcript of the council meeting, made by William Clarke, secretary to the General Council, was found in a cupboard at Worcester College, Oxford. How it got there, no-one knows, but it was a record of the debates, albeit a very incomplete one, and modern historians began to realize the significance of that fortnight.

The leading representatives of the Grandees at Putney were Lieutenant-General Oliver Cromwell and Commissary-General Henry Ireton. Prominent figures on the radical side included Colonel Thomas Rainborowe and Colonel Edward Sexby. It was Rainborowe who made what is now best-known speech from the debates, arguing for universal male suffrage:

Really I think that the poorest he that is in England has a life to live as the greatest he; and therefore truly, sir, I think it’s clear that every man that is to live under a government ought first by his own consent to put himself under that government; and I do think that the poorest man in England is not at all bound in a strict sense to that government that he has not had a voice to put himself under.

But Rainborowe was in a minority, even on his own side. The consensus among the radicals was to extend the franchise to every free adult man in the country but thereby exclude apprentices, servants, and alms-takes. This was still too much for the Grandees. A matter of great concern to all the participants was the question of what God’s wishes on the matter might be. Though each day began with a prayer meeting, participants remained divided on the matter. Some believed that the success of the New Model Army made it clear that God was against Charles I in particular and the monarchy in general. Others still regarded the king as divinely appointed, though in severe error, and thought that a compromise could be reached with him to safeguard English liberties. Cromwell, notably, was undecided as to the Divine will in relation to the king. Ireton was adamant that an extension of the franchise to those outside the class of property owners would result in anarchy. The property-less, in his view, had no genuine stake in the nation, could up sticks whenever they pleased — ‘heere to day and gone to morrow’ — and might even vote for laws that could lead to the confiscation of property.

When the General Council meeting broke up on 8 November, no conclusions had been reached. It was Ireton who decided it was time end the debates and send the soldiers back to their regiments, concerned at the divisions within the General Council and their implications for Army discipline. Three days later, the king escaped from detention at Hampton Court and fled to Southampton, effectively ending the Grandees’ hopes of a compromise with him. Cromwell moved against the radicals in the Army by organizing three mass meetings of the regiments at which each soldier was ordered to sign a declaration of loyalty to Sir Thomas Fairfax, the commander-in-chief. A mutiny by the radicals at one of these meetings, at Corkbush Field in Hertfordshire, was put down and the three ringleaders executed on the spot. The Grandees were back in charge and the New Model Army was ready for the next phase of the civil war.

As noted above, the record of the Putney Debates that has survived is incomplete and many days of the discussions are unknown. But what does survive is impressive and oddly humbling. The overriding impression is one of serious politics played out in a serious time, conducted by serious men, gravely aware of their responsibilities. What a contrast with the posturing, emoting party hacks who comprise most of our current political class. It strikes me too, not for the time, how small a space the English Civil War (and more broadly, the War of the Three Kingdoms) occupies in our national imagination, compared to say, the Tudors or World War Two. Given the extraordinary events, the personalities, the stakes, that puzzles me greatly.