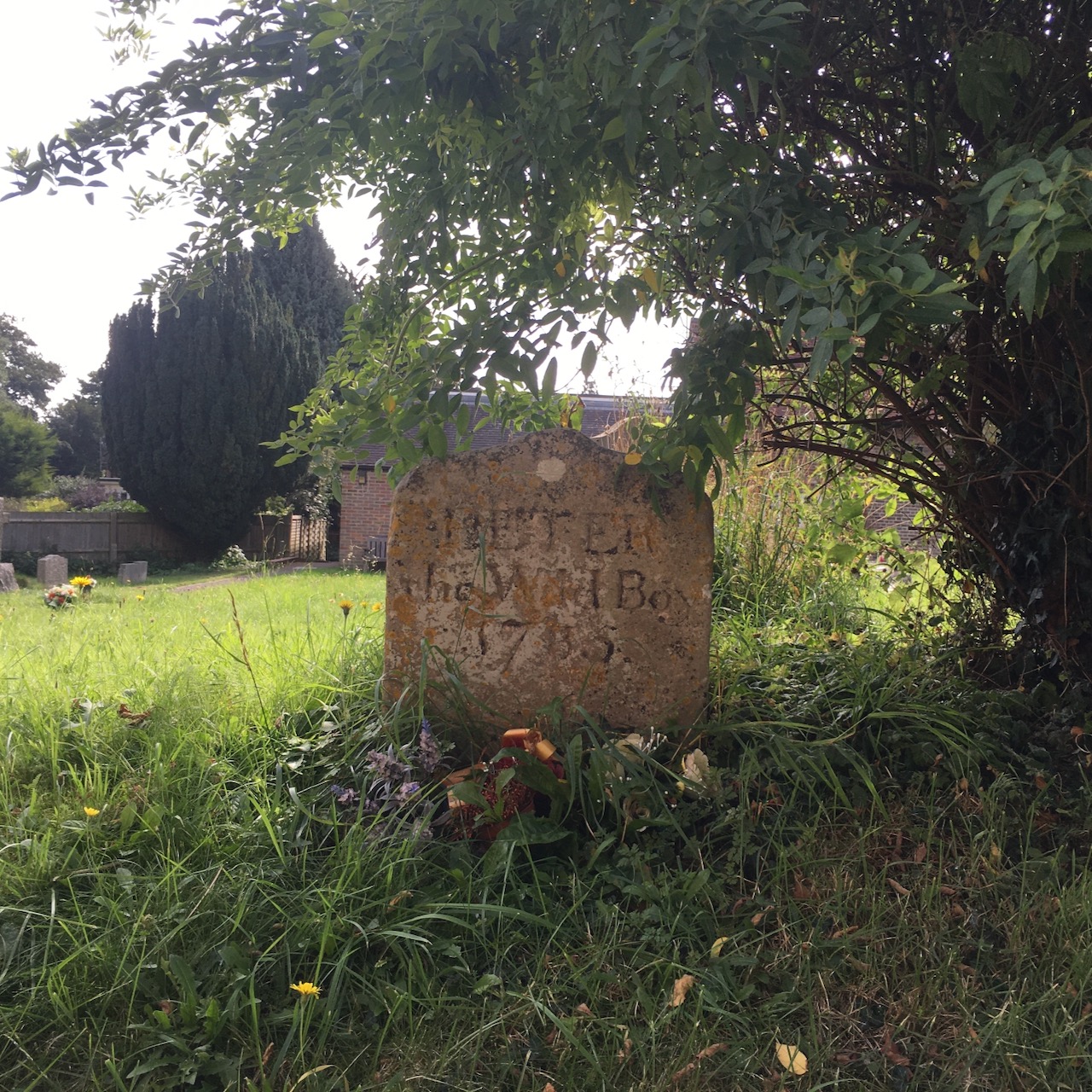 The World has, for some Time, been entertained, or amused rather, with a strange Appearance of a Thing in human Shape ; but, for ought that yet appears, very little else, and in some Sense, as it were, without a Soul .

Visit the church of St Mary’s in Northchurch, Hertfordshire and you will see, on a raised section of the churchyard opposite the south porch, a plain weathered gravestone carved with the inscription, ‘PETER the Wild Boy 1785’. When Daniel Defoe referred in his pamphlet of 1726, quoted above, to ‘a Thing in human Shape’, it was Peter he had in mind. Defoe’s publication is subtitled ‘A body without a soul. Being observations upon the young forester lately brought to town from Germany. With suitable applications. Also, a brief dissertation upon the usefulness and necessity of fools, whether political or natural’. How did this ‘young forester’ from Germany end up in a Hertfordshire churchyard?

Peter was found in the woods near Hamelin (yes, the same Hamelin where the Pied Piper lured the town’s children away) in 1725. According to contemporary descriptions, he was ‘ naked, brownish, blackhaired creature’, ‘walking on his hands and feet, climbing trees like a squirrel, and feeding on grass and moss’. The boy, estimated to be around thirteen years of age, had no language and no apparent notions of higher human behaviour. He was given the name of Peter and taken into the charge of the local authorities. Hamelin at that time was part of the Electorate of Hanover, ruled by a Prince-Elector who also happened to be the King of Great Britain. This was George I and when a few weeks later the king came to Hanover on a visit, Peter the Wild Boy was presented to him. Whether the king regarded him as a subject for scientific study or simply a curiosity is unclear, but on his return to England, the Wild Boy came with him.

Peter was put into the care of the physician John Arbuthnot. Several attempts were made to teach him English and to educate him in the manners of the civilized realm, both without much success, though he did learn to bow and kiss the hands of ladies. Caroline, Princess of Wales, was particularly taken with him. Peter was moved into her London home, where he was kept there as a kind of pet, always dressed in a tailor-made suit of red and green.

Peter’s presence in London caused huge interest among the eighteenth century chattering classes. Where did the boy originally come from? Had he been raised by animals? Was he actually an animal himself, without a soul? Given that Peter was baptized as soon as he got to England, there seems little doubt that the king and his court regarded the boy as a human being, albeit a most primitive one.

Defoe, having met and observed Peter, concurred. Citing particularly the boy’s ability to think and to laugh, he concluded:

This, I think then, is the Sum of what we may say of this Creature, viz. That he has a Soul, though we see very little of the ordinary Powers of a Soul acting in him, any more than are to be discerned in the more sagacious Brutes…

He has a Body, in its Shape Human, the Organick Parts Anatomically, we believe, the same as Human ; he acts the Powers and Motions of sensitive Life, and of rational Life, alike, as if they were confused and huddled together undistinguished, and just as Nature directs in other Creatures ; but he is a Ship without a Rudder, not steer’d or managed, or directed by any Pilot.

Defoe left open the question as to whether Peter could be educated sufficiently to enable him ‘the Use of his Reason’.

As it became apparent that he would never learn a language and fully join human society, Peter’s novelty value wore off. In 1728, he was sent to live on a farm at Berkhamsted, Hertfordshire, his bed and board paid for by the Crown. He settled into life as a farmhand, able to execute simple manual duties, enjoying a glass of gin and a dance in his leisure time. He would occasionally wander off, turning up as far afield as Norwich in 1751. After this last escapade he was fitted with a collar inscribed, ‘Peter, the Wild Man of Hanover. Whoever will bring him to Mr Fenn at Berkhamsted, Hertfordshire, shall be paid for their trouble’. The collar is preserved in the library of Berkhamsted School.

Perhaps surprisingly, Peter lived a long and seemingly contented life. He died at Mr Fenn’s Farm in 1785 and was buried in nearby Northchurch. It had been a remarkable journey from a forest in Germany to a churchyard in England.