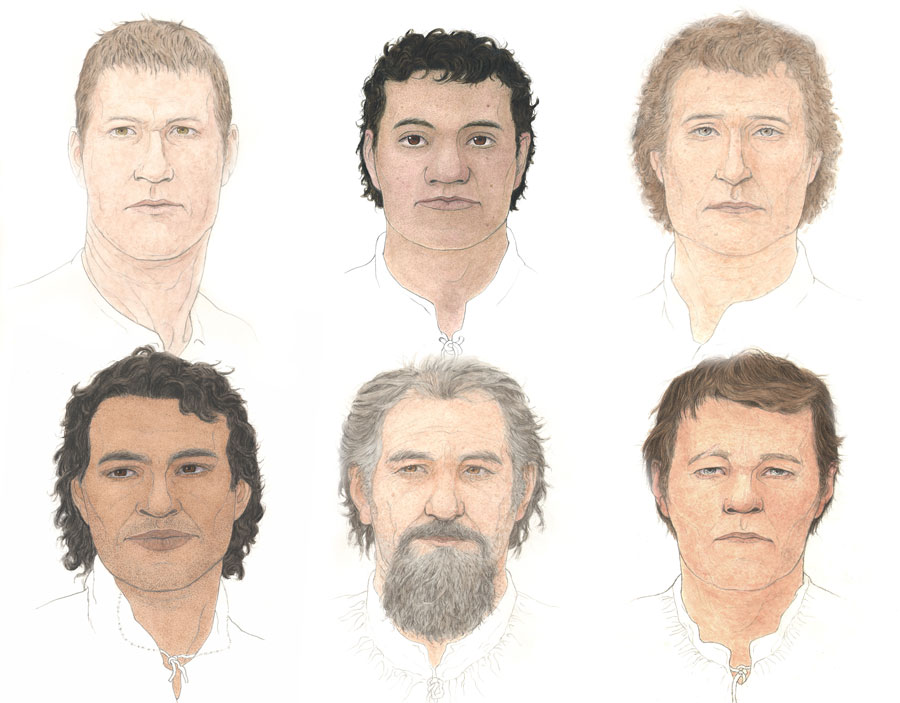 (Reflections on the Revolution in France – Edmund Burke)

If Edmund Burke was right that the dead are as much a part of Society as the living, then it can be no surprise they are so frequently drawn into the political disputes of our time. There can be no rest for the dead when they must be enlisted or press-ganged to fight the battles of the living.

The BBC website reported in May that a study led by researchers from Cardiff University suggested ’the crew of King Henry VIII’s warship the Mary Rose was more ethnically diverse than previously thought’. Multi-isotope analysis of the teeth of eight crew members indicated that three of them were non-British in origin. According to the report, the analysis ‘suggests at least three of them may have come from southern European coasts, Iberia and North Africa’.

Now this an interesting finding, and an amazing use of cutting-edge scientific techniques. But the researchers felt obliged put a contemporary political spin on it. One of the authors of the paper, Jessica Scorrer, was quoted: ‘Our findings point to the important contributions that individuals of diverse backgrounds and origins made to the English navy during this period. This adds to the ever-growing body of evidence for diversity in geographic origins, ancestry and lived experiences in Tudor England.’

The phrase ‘lived experience’ is a bit of a giveaway here, a linguistic marker of progressive academia. Now I’ve read a fair bit of Tudor history and not once have I ever read a claim that there were’t people of different nationalities and different origins living in England at the time. I sense that Ms Scorrer’s concern when she spoke to the media was not to rectify a historical misconception but to show whose banner she carries in the so-called culture wars.

There were 415 men aboard the Mary Rose when she sank back in 1545. Since the wreck was raised in 1982, the remains of 179 distinct individuals have been identified by archaeologists. The Cardiff study analysed just eight of these and concluded that three of them ‘may have’ come from outside Britain. Leaving aside the question of whether or not such a small sample size can be used to draw any conclusions about the English navy of the time, the identification of a couple of southern Europeans and a north African among the crew doesn’t seem so staggering. This was a time when the religiopolitical entity known as Christendom still existed, when borders were more porous than they are now, and when, so far as I know, the Tudors didn’t operate a zero-immigration policy.

Back in 2006, some other researchers who’d been rummaging around the Mary Rose’s human remains published a paper which claimed to have solved the mystery of how and why the Mary Rose sank. Using ‘stable isotope ration analysis’ of eighteen crew members, they claimed ‘these data suggest the presence of 33–60% of non-natives’. The authors wrote, ‘our results lend weight to the suggestion that poor communication may well have contributed the observed fatal navigational manoeuvre which led to her sinking’.

I wonder if such a claim would even be made in quite the same way today. While the notion of a diverse crew would be welcomed, the theory that this might have caused the sinking of a ship with the loss of almost all of its 415 hands would not. Diversity is our strength, right?. In any case, the study was soon shot down. A paper published the following year disputed the findings, stating, ‘we have re-evaluated the data of Bell et al. and conclude that only one of the 18 sailors demonstrably spent his childhood outside the British Isles’.

While I was reading about the Mary Rose crew I remembered the Channel 4 programme First Brit: Secrets of the 10,000 Year Old Man, screened in 2018. The film documented scientists carrying out a genetic analysis of the early human known as Cheddar Man, the oldest complete skeleton found in Britain, who lived some 11,000 years ago. This genetic data was then used to reconstruct his head, including the colour of his skin, hair, and eyes. The programme opened with a portentous voice-over: ’There’s a been a lot of talk about Britain lately, about who belongs and who doesn’t. Now science is about to reveal the truth about where we come from and who we really are…’ Even the dimmest viewer would have guessed where this was going. From the misleading title — Cheddar Man was in no sense the ‘First Brit’ — to the endings’s big reveal — Cheddar Man was…gasp… dark-skinned — this was science in the service of progressive politics. Take that, you little Englander bigots!

Not long after its broadcast, the film’s conclusion was questioned. New Scientist reported, ‘one of the geneticists who performed the research says the conclusion is less certain, and according to others we are not even close to knowing the skin colour of any ancient human’. Brenda Henn of Stony Brook University, New York, told the magazine, ‘The idea that there are really only about 15 genes underlying skin pigmentation isn’t correct. It now seems likely that many other genes affect skin colour. We don’t know how. If we are still learning about the link between genes and skin pigmentation in living populations, we can’t yet predict the skin colour of prehistoric people’. Naturally, these reservations and caveats got far less publicity than the original claim.

I have no skin in this particular game, though it would be very interesting to have an idea of what Cheddar Man looked like. In any case, about five thousand years after his death the Beaker people came in from central Europe and ‘replaced 90% of the British gene pool in a few hundred years’, according to another study published in 2018.

Science is at the early stages of applying genetics to history and there is much that is still obscure and imprecise. It’s undeniably true that scientific investigations cannot be value-free. But examining human remains through the distorting lens of present-day political fads only compounds that obscurity and imprecision. One of the things I value most about these studies, regardless of their uses and abuses, is that they serve to strengthen our sense of that partnership between the living, the dead, and the yet-to-be born, the partnership that Burke called Society.

[Top image of the men of the Mary Rose © Mary Rose Trust. Image of the Cheddar Man skeleton © Tom Barnes/Channel 4.]