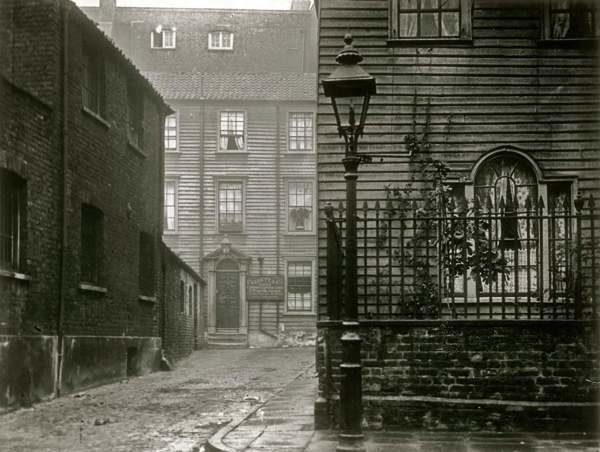 Wellclose Square is nothing to look at today, dominated as it is by regulation-ugly blocks of council flats, but it was once the smartest address in the East End, the residence of silk traders and sea captains. The square was laid out in 1678 by Christopher Wren as part of his grand design for the rebuilding of London after the Great Fire and positioned using Masonic measurements, according to Merlin Coverley’s book Occult London. Though it maintained its status for a couple of hundred years, by the end of the nineteenth century, the merchants and mariners had long decamped and Wellclose Square was turning into a slum. The Blitz imposed more severe damage, and while many of the grand old houses survived in some form, by the end of the1960s all had been condemned and demolished. The Wellclose Square that once was had been completely erased.

The most intriguing episode in the history of Wellclose Square occurred in the 1760s when it was home to two remarkable men, Emanuel Swedenborg and Rabbi Falk. Falk had arrived in London in 1472, after fleeing Westphalia where he had been found guilty of sorcery and sentenced to death by burning. Falk was no ordinary rabbi but a Ba’al Shem (a master of the Kabbalah) and an alchemist. Falk applied himself to building a fortune through speculation, pawnbroking, and, presumably, his alchemical activities, and was soon wealthy enough to move into a house on the square, where he lived for more than thirty years.

Tales abounded about Rabbi Falk. It was said he was using his laboratory to create a Golem, though unlike Rabbi Loew in Prague, he was unsuccessful. Once, on a journey through Whitechapel, a wheel came off his coach. He told his coachman not to stop and the wheel followed them for the rest of the journey. When he needed coal for his fire, he would incant a Kabbalist formula and the coal lumps moved by themselves. He once prevented the Great Synagogue at Aldgate from burning down by inscribing four Hebrew letters on its door.

Emanuel Swedenborg was another European mystic who made a home in eighteenth-century London. He was a man of science and invention, the editor of Sweden’s first scientific journal and a mining engineer by profession. It wasn’t until he was in his fifties that he began to experience the dreams and visions that sent him along the mystic’s path. One of these visions came to him when he was dining alone one evening in a London inn. He was hungry and attacked his meal with gusto. But the room suddenly grew dark and he saw the floor ‘covered with the nastiest crawling animals, like snakes, frogs, and creatures of that kind’. Then a figure appeared and told him, ‘Don’t eat so much’. That might seem a ridiculously mundane communication from the spiritual plane, but the same figure reappeared a dream that night, revealed himself to be the Lord God, and gave Swedenborg a mission to explain the true meaning of the scriptures to mankind.

Swedenborg moved to Wellclose Square in 1766. Unlike Falk, he did not live in one of the grand houses but at an inn called the King’s Arms, whose landlord was a fellow Swede. Neighbours now, Falk and Swedenborg met regularly to discuss their occult pursuits. Ed Glinert, in his book East End Chronicles, writes that some of these discussions concerned ‘Kabbalist sexual techniques that could produce a prolonged erection and state of orgasmic trance’ and how ‘in the spirit world the soul hallucinates a spiritual body to enjoy more wonderful sensations than it experiences on earth’. There was nothing prudish about eighteenth-century mysticism.

[The top photograph of Wellclose Square was taken in 1920 © London Picture Archive. Portrait of Emanuel Swedenborg by Carl Frederik von Breda and Portrait of Rabbi Falk by John Singleton Copley, both courtesy of Wikimedia Commons.]