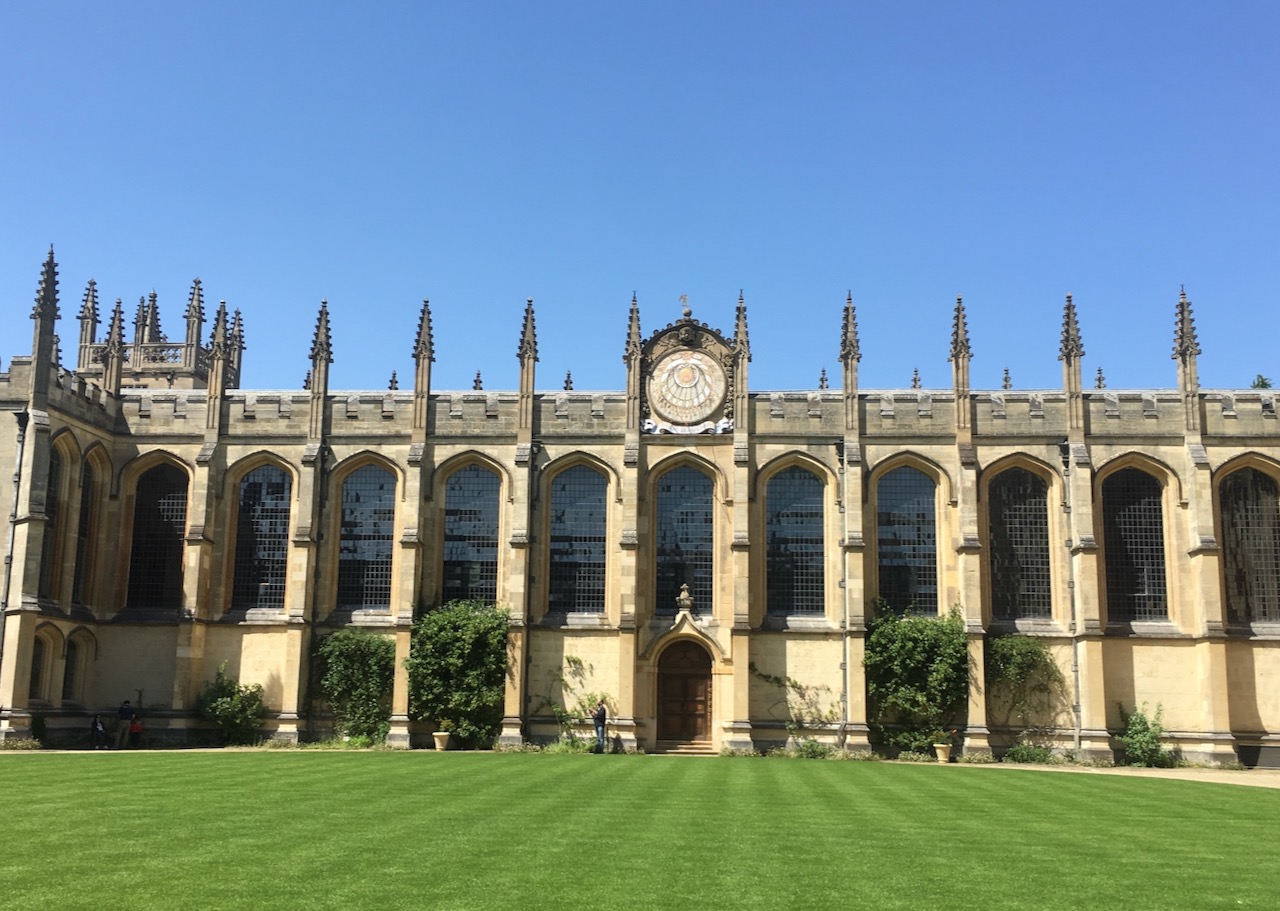 And where round the sundial
The reluctant hours of day,
Heartless, hopeless of their way,
Rest and call;

There are sundials great and small everywhere in Oxford. One of the most impressive adorns the library of All Souls College and is, according to the college’s website, ‘attributed’ to Christopher Wren. In his biography His Invention So Fertile: A Life of Christopher Wren, Adrian Tinniswood is even more circumspect, referring to Wren’s ‘conjectural authorship’. The sundial dates from 1658, when Wren was a fellow of All Souls, and though there may be no firm evidence for Wren’s mind and hand at work, the attribution seems justified given his presence at the college and his abilities and inclinations. The Oxfordshire volume of the Buildings of England series notes, ‘As Christopher Wren was Bursar that year [1658], it is a reasonable assumption that he designed it’.

Like most scientists of his time, Wren was an immensely practical man. During his years at Oxford, his designs and constructions included a box-beehive, a hygrometer, an instrument for writing two copies of a document at the same time, and a perspectograph, which consisted of a movable sight linked to a pen and was used to trace a view on paper. With his colleague, John Wilkins, he built an 80-foot telescope to observe the Moon. Wren also had an interest in what was called Dialling, the theory and practice of sundials, from an early age. In his book of biographical sketches, Brief Lives, the seventeenth-century antiquarian John Aubrey recorded that when Wren was in his teens, he made ‘severall curious Dialls, with his owne handes’.

So Wren had form when it came to sundials. The All Souls instrument is appropriately magnificent for its setting in an Oxford college, subtly coloured and gilded, decorated with a cartouche of the college arms, and topped with a cornice of a cherub. The Latin inscription on the scroll at the foot of the dial reads ‘Pereunt et impautantur’, which can be translated as ‘The hours pass away and are counted against us’. The stonework was done a by a local mason, William Bird, and the college accounts record a price of £54.

While the present-day visitor is likely to regard this and any other sundial as quaint and purely decorative, in Wren’s own time and for a couple of centuries afterwards, sundials, for all their elegant simplicity, were essential items of technology. They were used not just to tell the time but to set clocks and watches in the locality. The sundial as a reference timepiece was not fully superseded until the nineteenth century when the railways and the telegraph began to impose a new and more precise standard time on Britain.

Sadly, the All Souls sundial hasn’t been suitable for time-telling and clock-setting since 1877, when it was moved from its the South wall of the college chapel to its current location. John Simmons, a historian and more recent fellow of All Souls, characterised this as an act of ‘High Victorian hubris’ and campaigned to have Wren’s sundial restored to its original position, where it could again keep accurate time. When Simmons died in 2005, he left a bequest to the college with this condition attached. The amount of the bequest was undisclosed but it wasn’t enough to tempt the college. The offer was politely declined. I think Wren, ever the practical man, would have been on the side of Simmons.