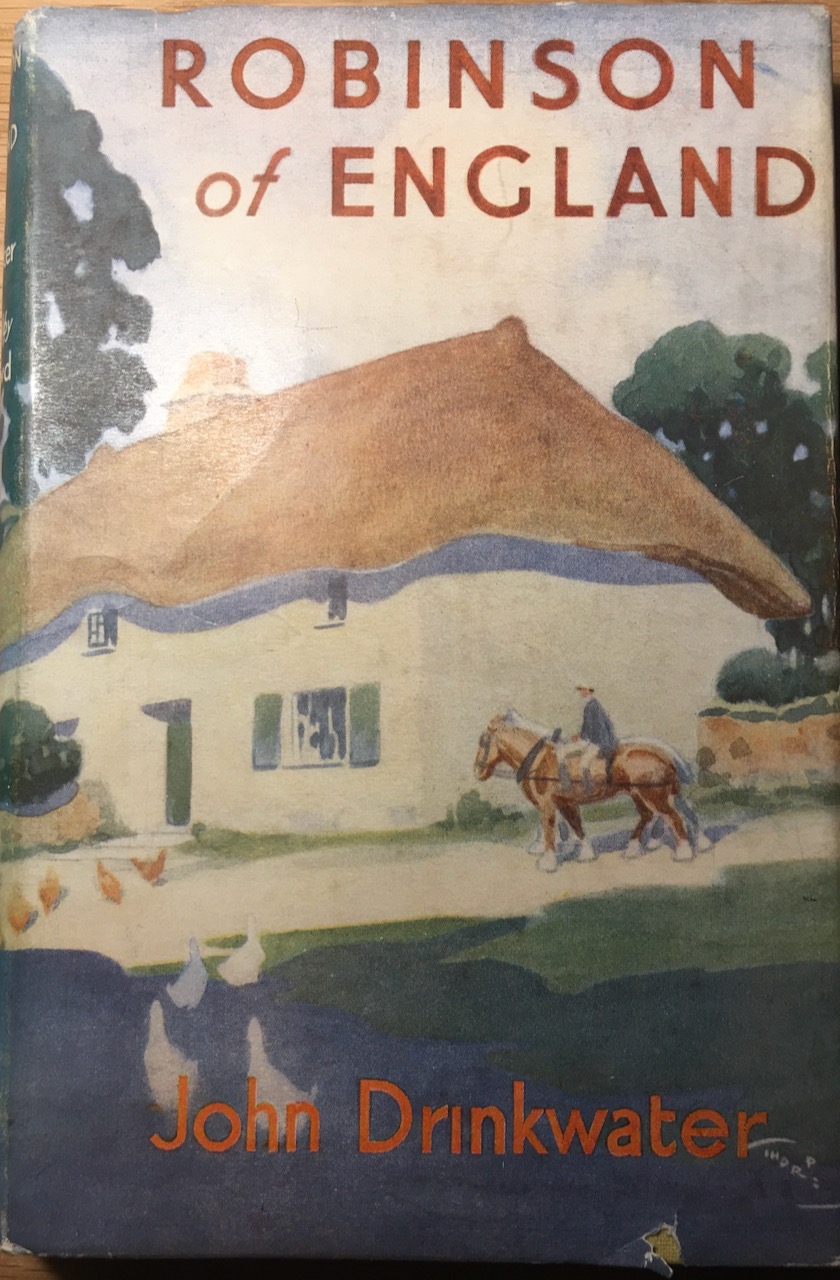 As he brooded restlessly along the Oxfordshire landscape, he felt the story of England, of which he was part, gradually taking possession of him. He must learn it all, through and through, not to make any material use of it, but for its own sake, as a lover. That was it: he was in love with England.

With the continuing lockdown restricting my opportunities to go places and see things, here’s another post in the occasional series Books About Britain.

John Drinkwater’s Robinson of England is a very peculiar novel indeed. I don’t mean funny-peculiar, but peculiar in the sense of being curious and unusual. It is, to use a word, that Drinkwater’s contemporaries might have employed in the circumstances, a queer book. I suspect it was peculiar even when it was published in 1937 and from a distance of more than eighty years it appears even more so. But I’m not using ‘peculiar’ as a pejorative term. The book is certainly an oddity, but with a charm all of its own

The central character — to call him a protagonist would give an impression of drama which is virtually absent, though he is a kind of hero — is an Englishman in his fifties called Robinson Dare. The first fifth of the novel is taken up with a biography of Dare. He is born in Oxford, the son of an ironmonger, wins a scholarship to St John’s College, where he takes a double first in Classics, and wins ‘the Newdigate Prize for a poem on Confucius’. He also excels as an athlete. After graduation, he turns down several job offers, accepts a position on a national newspaper in London but finds journalism to be a dirty business and returns to Oxford.

After much heart-searching and restless brooding along the Oxfordshire landscape, Drake resolves to become a full-time writer, telling his sceptical father:

I can get a cottage, four rooms, down in the Cotswolds, for three and sixpence a week. I could keep myself there on a pound a week all in. I think I ought to manage that pretty soon by writing, one way and another. I could furnish the place for almost nothing. If you could promise fifty pounds a year for three years, and an extra twenty-five to start with, I ought to be alright.

This is 1906, a long-ago time when Cotswold cottages could be had for three and sixpence a week and a man could live on a pound a week. Dare decamps to the Golden Valley near Stroud and spends the years up until the Great War writing books and exploring England:

On his travels he saw boots being made by pieceworkers in the villages of Northamptonshire, and lace at Nottingham. In Huntingdon he found shopkeepers who might well be the lineal descendants of Cromwell’s Ironside, and in the country around Norwich he felt the living quality that had inspired the masterpieces of Crome and Cotman. The Lincolnshire fens told him of determined generations who had subdued the most stubborn moods of nature to the need of man, and in the broad grass frame of the west he renewed for himself the traditions of the great wool-staplers who in their ascendancy had built themselves houses like princes. The oaks and meadows of Warwickshire reflected Shakespeare’s genius for him as clearly as did the peaks and fells and meres of Westmorland that of Wordsworth. On the field of Edgehill he reconstructed the first great but indecisive battle of the Civil War, and among the hopyards of Kent he saw Wat Tyler again heading the peasant’s revolt that led to his death at Smithfield more than five hundred years ago. He talked to fishermen in Cornwall who didn’t know that Queen Victoria was dead, and to an old farm labourer in Derbyshire whose wages as a young man had been seven shillings a week. In Staffordshire he found the potters working as they had done, father and son, at one wheel since the seventeenth century, and in the long chain of ironworks in the same county and the cotton towns of Lancashire he saw the desolation dealt by the hand of modern industry.

I’ve quoted that extended passage to give a notion of Dare’s — and Drinkwater’s — lyrical patriotism. One of the most notable things about Dare’s excursions into English history and topography is that London is absent, that reference to Smithfield excepted. Dare’s England is provincial rather than metropolitan. These travels prompt reflections on English character, English exceptionalism, English genius, and fuel his writing. And so, by the early 1930s, Drake is settled into a bachelor existence in his Cotswold fastness. He has served in the Great War, been decorated for bravery, naturally, and doesn’t talk about it, naturally. He has published several books and had a failed love affair. But all of this is a prelude to the main events, such a they are, of the book.

One Christmas, Dare’s two nieces and nephew come to stay with for him for the holidays. What follows is an exercise in didacticism, a survey of English history and culture for the children, inevitably idiosyncratic and selective, but all the more interesting for that. They visit the local manor house and the local blacksmith, they travel to Civil War battlefields and a football match, they watch fox hunting and whippet racing. Dare tells them about stoneware, slavery, and alehouse tokens, quotes great chunks of poetry, including some of Drinkwater’s own, and rhapsodises on the English landscape.

Though his vision of England is romantic and at times even a little pessimistic, Dare is a progressive liberal and an atheist, not a Tory. The book’s dedication is to Ramsey MacDonald, an unusual choice in the late 1930s. His heroes, like Drinkwater’s, are Cromwell and Lincoln. All this didacticism could be exhausting for the reader and the children but Dare — or is it Drinkwater? —pull it off. As with any book that’s more than sixty years old, there’s a subtlety, allusiveness, and breadth of learning that’s altogether missing from modern fiction, whether literary or commercial.

I’ve hinted that Dare and Drinkwater are almost interchangeable and I think that they are, almost. This is not really a novel at all but an extended love letter to England. John Drinkwater, known in his time as a playwright and poet, is an obscure figure in the present age, (though he does have a dedicated website, clearly a labour of love on someone’s part). His ODNB entry notes that ‘in later life he frequently expressed regret and embarrassment at not having had a university education’. Robinson of England was Drinkwater’s last book, published posthumously, and I can’t help feeling that the figure of Robinson Dare is the man he wished he might have been: a gentleman-scholar, living in unencumbered seclusion amid his books and collections, financially secure and able to ignore the literary mainstream.

Arguably it’s the second and third rank novels that give the greatest insight into a period. There is a between-the-wars wistfulness about this book, an implicit sorrowful sense that the best days of England are behind it, the stuffing knocked out of it by a combination of industrialisation, mass culture, and a coarsening of the national imagination. Dare and the children attend the local church one Sunday, not because he is a believer but because he thinks the practice has a social and cultural value. Afterwards, they wander in the churchyard:

‘It went on all right until about fifty years ago,’ he said. ‘It wasn’t so good in 1850 as in 1750, but it wean’t bad. Then something went wrong with all that sort of thing in England. Look at that.’

He pointed to a stone Erected to the Loving Memory of William Gaverell, Who Departed This Life June 9th 1889. It was made of highly polished granite, shaped to a pointed arch, with a heavy black marginal line cut around it. The lettering was incised in an elongated or flattened black type that was stiff without dignity Underneath the date were these lines —

Though Father’s gone to Heaven above,
He still is with us in our love —

And below that again a bearded figure of Time with a sickle competently and quite insensitively carved. The whole effect was extremely unpleasing.

‘Why is that so bad and the others good?’ asked Jane.

‘That’s something nobody can explain,’ answered her uncle, ‘but there it is. There’s no mistaking it.’