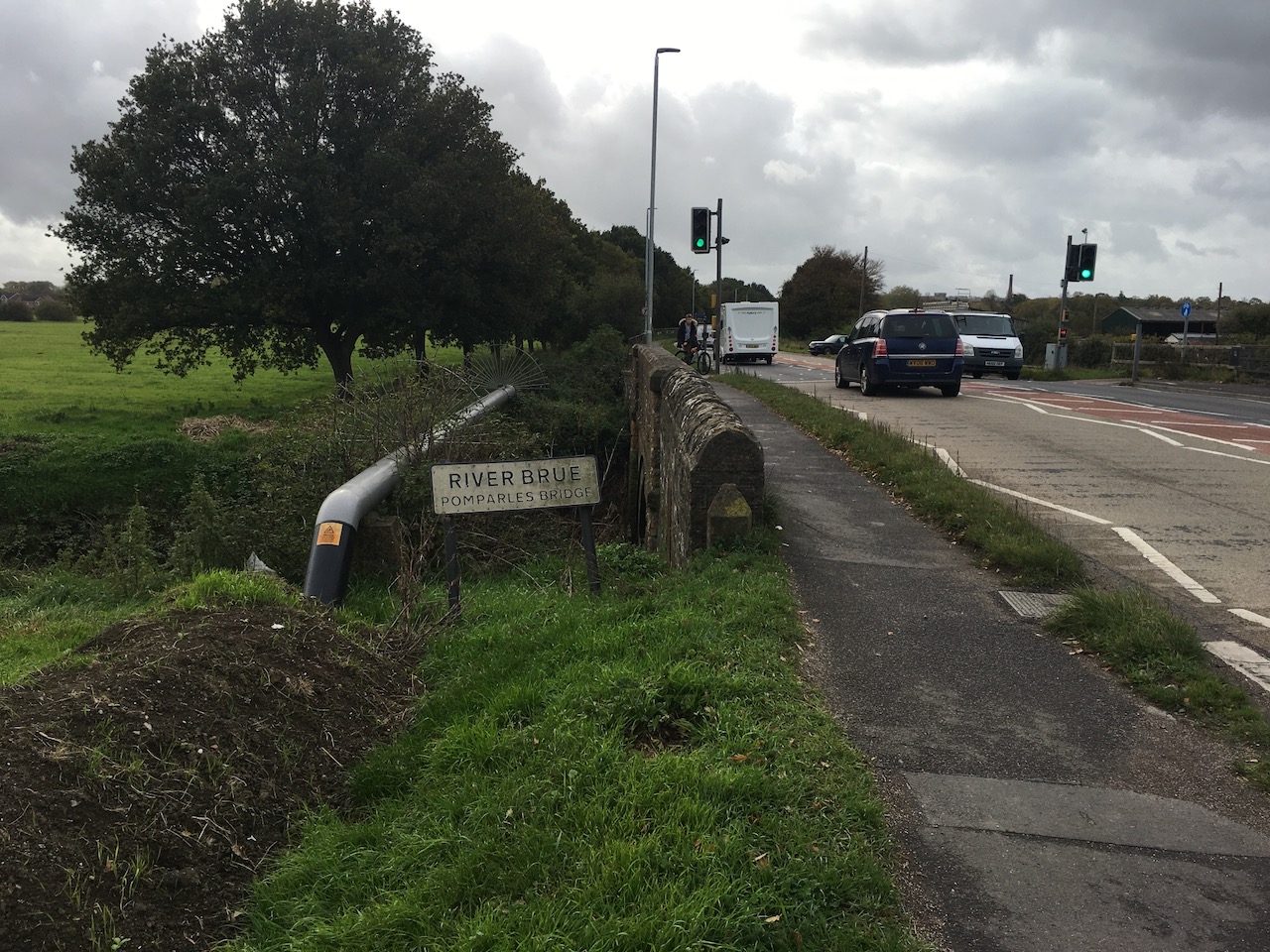 In my last post, I referred to Pomparles Bridge as ‘legendary’ — and so it is. But while that Pomparles Bridge was in the same location, give or take, as the present-day bridge, they are not the same thing. The visitor, misty-eyed and semi-delirious from the effects of Arthurian tales, nerves tingling with the notion of sighting the Lady of the Lake, will be crushingly disappointed with the reality. What he or she will see bearing the incessant traffic of the A39 between Glastonbury and Street, is an ashlar-faced concrete bridge from 1912, joined to a concrete deck added in the 1970s. Both sections are squat, ugly, and distinctly unromantic. And rather than a lake, the only water in view is the narrow turbid channel of the River Brue.

The ancient Pomparles Bridge linked the south-western end of the Isle of Avalon with the mainland. The name derives from the Latin Pons Perilis, the Bridge Perilous. That bridge, according to the version of the legend told by Thomas Malory in Le Morte d’Arthur, was where the sword Excalibur was thrown back to the Lady of the Lake by Sir Bedivere, after King Arthur’s final, fatal battle. Other versions say that it was Arthur himself who returned the sword to the sacred waters. Archaeologists have found evidence of an early medieval bridge on the site, indicating once again that whether or not there is any historical truth to the person of Arthur, many of the locations associated with him are more than legendary.

As the Somerset Levels were gradually drained over the centuries, the lake and the rest of what was effectively an inland sea disappeared, leaving the River Brue as the border of Glastonbury/Avalon. When the antiquary John Leland visited the area in 1542, the wooden bridge had been replaced with a four-arched stone bridge. Leland noted that the site was ‘wher men fable that Arture cast his swerd’.

In 1836, William Phelps published his book, The History and Antiquities of Somerset, and included an engraving of Pomparles Bridge as it was at the time. Phelps referred to it as the ‘Roman Bridge at Northover’ (Northover being a village on the edge of Glastonbury). This construction had two, perhaps three, arches, though it doesn’t seem improbable that many of its stones had formed the bridge that Leland stood on.

Back to the present day: what is the hopeful, expectant visitor to do when confronted with the actually-existing Pomparles Bridge? Rather than dwelling on the ever-present question of why modernity is so often twinned with ugliness, he or she should shield their eyes from the concrete, muffle their ears from the traffic drone, and by an effort of will, access the legendary realm. John Cowper Powys’s 1932 novel, A Glastonbury Romance, captures the dual nature of the modern Pomparles Bridge experience. When the cynical, opportunistic John Crow wanders onto the bridge, he sees little at first besides muddy waters and sordid death:

John leaned against the parapet and surveyed the trickling water of the Brue. There was much mud there, and several extraneous objects, carrying little association with Excalibur, rested half-buried in this mud, while a pathetically small stream struggled with weakened impetus to deliver itself of such degrading objects. John’s eyes, roaming in search of anything that might recover the ambiguous romance that hung about the spot, fell eventually upon a dead cat whose distended belly, almost devoid of fur, presented itself, together with two paws and a shapeless head that was one desperate grin of despair, to the mockery of the sunshine.

Crow stares at the decomposing cat for a while, transfixed by the ‘abominable despair in the hollow eye-sockets’. His sense of outrage grows as he considers the suffering that the ‘First Cause’ has inflicted on the creature. Then:

He had been thinking about King Arthur a good deal in the course of his recent advertising but only in a childish and very ignorant way. He had never read the romances. But at this second, in the blaze of Something that afterward seemed to him to resemble what he had heard of the so-called Cosmic Rays, he distinctly saw…literally shearing the sun-lit air with a whiteness like milk, like snow, like birch-bark, like maiden’s flesh, like chalk, like paper, like a dead fish’s eye, like Italian marble,…an object resembling a sword, falling into the mud of the river!

We cannot all be gifted a vision of Excalibur as John Crow was, but with a bit of imagination we may be able to time-travel back to the Isle of Avalon and share Pomparles Bridge with Arthur and Bedivere, if only for a few, brief seconds.