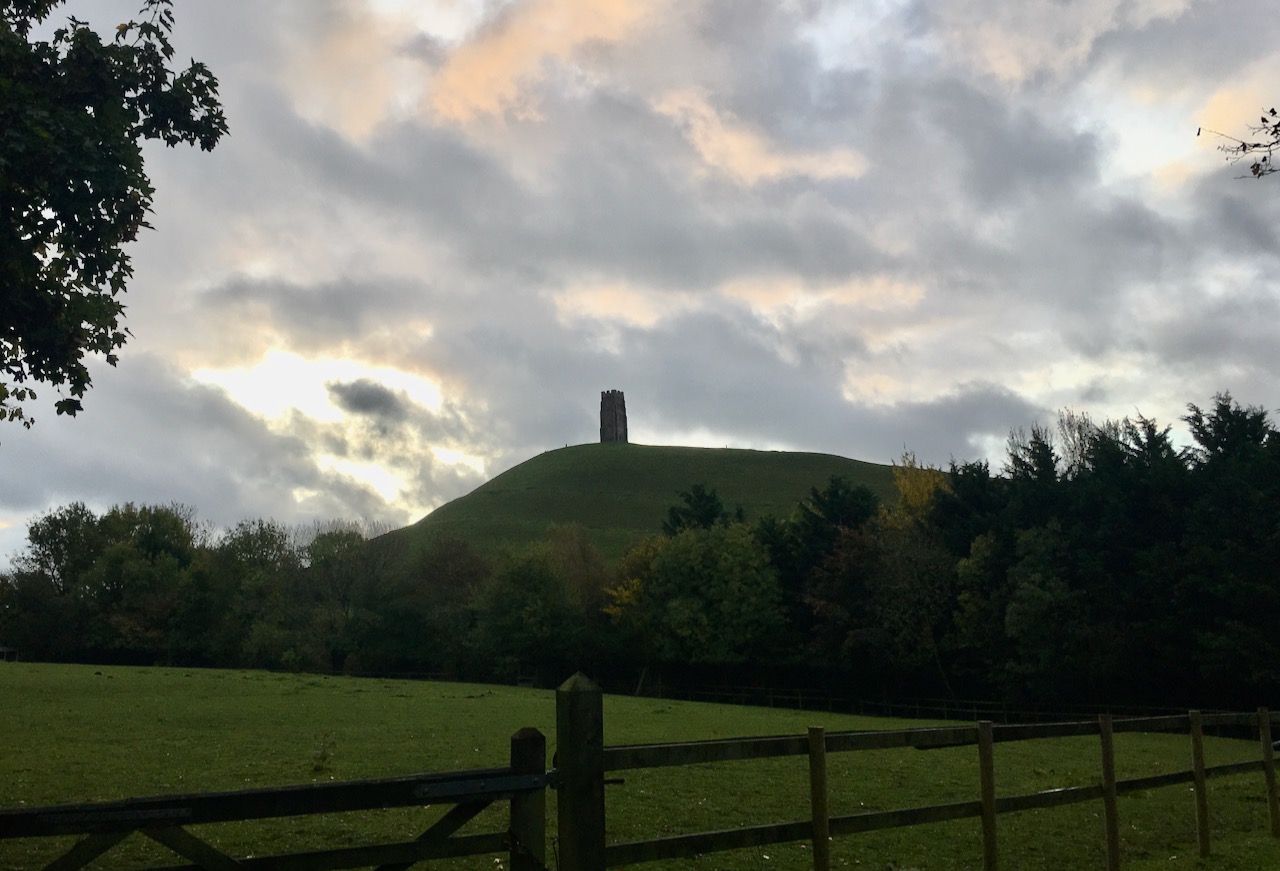 Glastonbury Tor shifted from prehistory into the kind of history we now called legend when Caradoc of Llancarfan, a Welsh monk, published his Vita Glidae (‘Life of Gildas’) in the early twelfth century. Gildas, a figure even more obscure than Caradoc himself, is thought to have lived between 500 and 600AD and is known for his post-Roman history of Britain, De excidio et conquestu Britanniae (On the ruin and conquest of Britain). Surveying Gildas’ life some six centuries after his death, Caradoc states that ‘St Gildas was the contemporary of Arthur, the king of the whole of Britain, whom he loved exceedingly, and whom he always desired to obey’.

Yes, Caradoc is talking about that King Arthur, the one whose tomb was supposedly rediscovered in the grounds of Glastonbury Abbey a few decades after he wrote the Vita Glidae. This was also the century when Geoffrey of Monmouth published his chronicle Historia regum Britanniae (The History of the Kings of Britain), a foundational text in the Arthurian canon. Clearly, there was something in the twelfth-century zeitgeist that made the idea of a powerful, noble, unifying British king appealing. It seems probable that the English civil war known as the Anarchy was one of the factors that prompted wistful glances back to the past and a yearning for the return of a sleeping king.

Caradoc tells us that Gildas came to Glastonia [Glastonbury] when he was driven from the Orcades [Orkney Islands] by the predations of pirates. Glastonia at this time was an island, the Isle of Avalon, isolated by the inland sea of the Somerset Levels, and the Tor was the stronghold of its king, Melvas, whom Caradoc calls king of ‘the summer country’ [Somerset]. Some time after Gildas’ arrival, Melvas kidnapped Gwenhwyfar, [Guinevere] the wife of Arthur, and took her back to Glastonia. After a year of searching, Arthur arrived at the place where his queen was being held, and ‘roused the armies of the whole of Cornubia [Cornwall] and Dibneria [Devon]; war was prepared between the enemies’.

But in the end there was no war. Gildas the Wise and the abbot of Glastonia persuaded Melvas to ‘restore the ravished lady’, battle was averted, and ‘she who was to be restored, was restored in peace and good will. When these things were done, the two kings gave to the abbot a gift of many domains’. No doubt, Arthur and Gwenhwyfar had a joyous reunion, but Caradoc does not say whether Melvas was happy with his end of the bargain.

By the time that Caradoc was writing, the summit of the Tor was occupied by a monastery rather than a chieftain’s fortress. The first church of St Michael on the site was destroyed by an earthquake in 1275. The second church survived until the Dissolution of the Monasteries, and fell into ruin after that. All that remains today is the church’s tower. Glastonbury Abbey, the richest in England, was dissolved in 1539 and when Richard Whiting, the last abbot, and two of his fellow monks were found guilty of concealing the abbey’s wealth from the agents ofThomas Cromwell, they were taken to the Tor to be hung, drawn, and quartered.

The most striking physical feature of the Tor, however, is not the solemn, solitary tower at its summit, but the terraces that form concentric rings around its heights. The consensus seems to be that these were made for agricultural rather than defensive purposes. But though they were certainly used for growing crops by the medieval monks, some writers have questioned whether this really was their original purpose. In 1968 the Irish writer Geoffrey Russell proposed that the terraces comprised a vertical labyrinth, similar in pattern to those found in ancient carvings all over Europe. The purpose of the labyrinth, according to Russell’s theory, is not to confound the walker but to enable some kind of spiritual death and rebirth.

There are many other legends and mysteries associated with the Tor. Nicholas R Mann’s short book Glastonbury Tor: A Guide to the History & Legends is a good introduction. As with so many of these ancient places, whenever I visit Glastonbury Tor I depart with the sense that the most mysterious aspect of the past is not its material remains but the minds and behaviours of the peoples who inhabited it.

[All the quotes from Caradoc’s Vita Glidae are from the 1899 translation by Hugh Williams.]