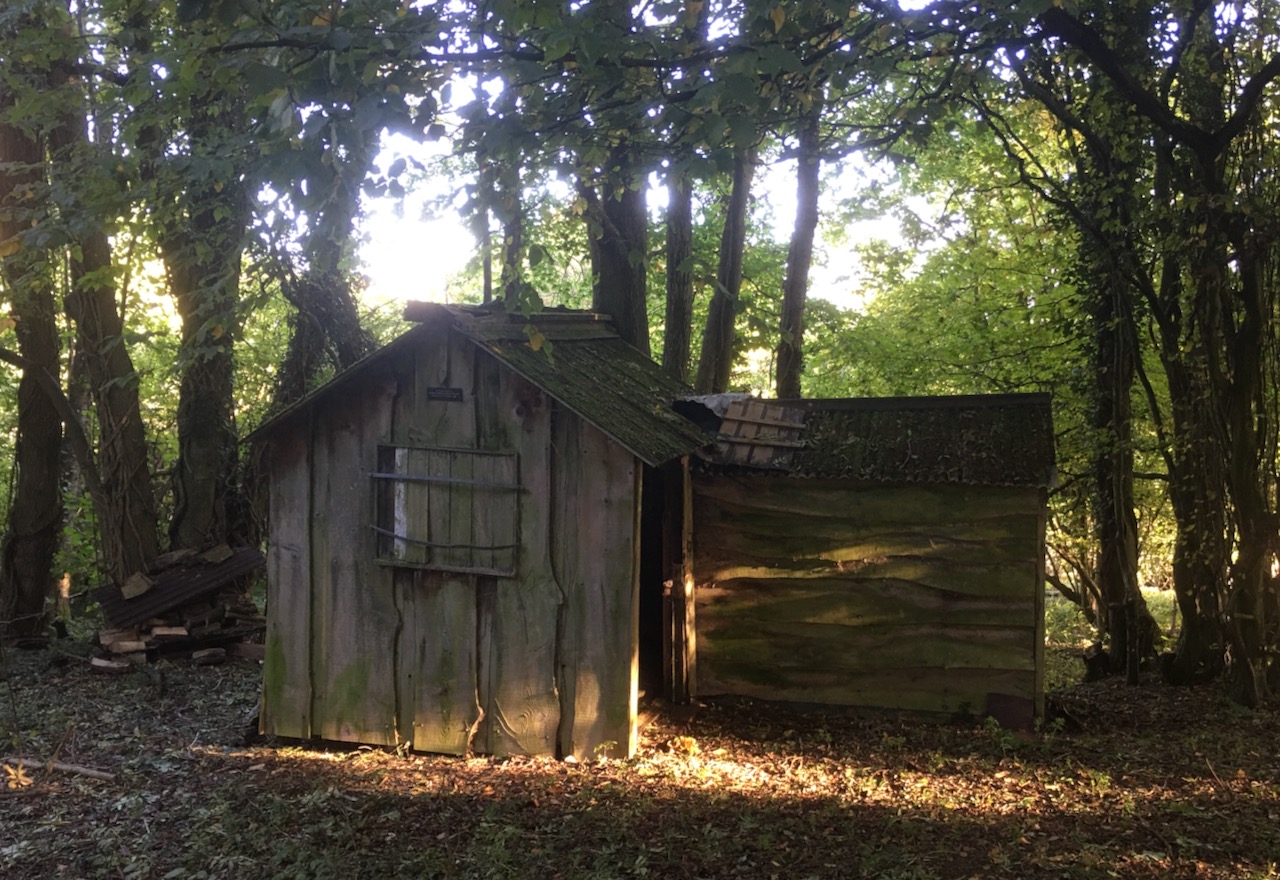 Down the valley towards Wendover near the Leather Bottle inn, Tam Black, a schoolteacher, used to live for part of the time in a small wooden hut without any modern amenities. The hut is now derelict. Tam is said to have driven a motorised lawn mower to his place of work, a boarding school in Crowthorne, Berkshire. He was an enthusiastic member of the Wendover Fire Brigade in the 1930s when the fireman had first to catch the horses before they could get the manual fire engine to the blaze. Tam’s adventures during the blitz were dramatised by his brother and filmed as The Bells Ring Down with Tommy Trinder playing the part of Tam.

I hadn’t heard of Tam Black’s shack until I saw a mention of it in a local newspaper, included in a brief description of a walk from Wendover to Dunsmore and back. There was no context and no precise location given. But the name, and the fact that it was thought worth mentioning, intrigued me. Who was Tam Black and how did he come to have a shack in this part of the Chiltern Hills?

The only other reference I could find was on the Dunsmore village website, a paragraph in a short book by a local historian, Peter Jewell, quoted at the top of this post. I liked the sound of Tam Black and decided to visit his shack. Easier said than done. I had neither directions nor a map reference. It took me three trips and a bit of deduction (‘Down the valley towards Wendover near the Leather Bottle inn…’ — alas, the Leather Bottle is no more, but I figured out where it once might have stood) before I finally found it. I realised that on my first two walks, I hadn’t seen the shack for the trees.

It is, as Peter Jewell says, derelict, and yet not as derelict as I expected. With a little work, I think, it could be made habitable again. But how much of the timber could be replaced before it ceased to be Tam Black’s shack and became something else? The exercise would invoke the Ship of Theseus question and keep local philosophers busy for years. Better to leave it as it stands, the work of a man who was, based on the intriguing paragraph above, what my parents’ generation would have called ‘a bit of a character’.

I wonder how a character like Tam Black would get on in the present age. Not so well, I fear. It seems improbable that his motorised lawn mower would receive an MOT certificate. Even if it did, imagine the problems he would have getting it insured for the forty-mile journey to Crowthorne. Then there is the matter of the shack itself. Buckinghamshire County Council and the Chilterns Conservation Board would soon have it removed and probably slap Tam with a fine or two. And how would a boarding school with a reputation to maintain view one of its teachers living in such conditions outside term-time? I suspect Tam Black would be chided, harassed, and prosecuted into conformity in all those areas of his life.

I’ve alluded in a previous post to the decline in eccentricity in our society, a seeming paradox, given the freedoms and opportunities many of us have. But it’s not a paradox. Our behaviour in pubic and in the workplace is policed to an unprecedented degree by the state, by the mass media, by employers, and by our fellow citizens. ‘Quirkiness’ is acceptable and even lauded within certain social boundaries, but it’s often little more than a marketing scam.

Tam Black died in 2000 at the grand age of eighty-nine. I hope he continued to spend some of his time at the shack through all those years. I looked up the film mentioned by Peter Jewell, The Bells Go Down. It’s still available on DVD, though Tommy Trinder’s character is called Tommy Turk, and there is no mention of Tam Black in the Wikipedia article. The writer of the novel on which the film is based is one Stephen Black however, so Jewell must be correct. Still, Tam Black’s best memorial is his shack, a self-constructed monument to a man who may have been one of the last true English eccentrics.