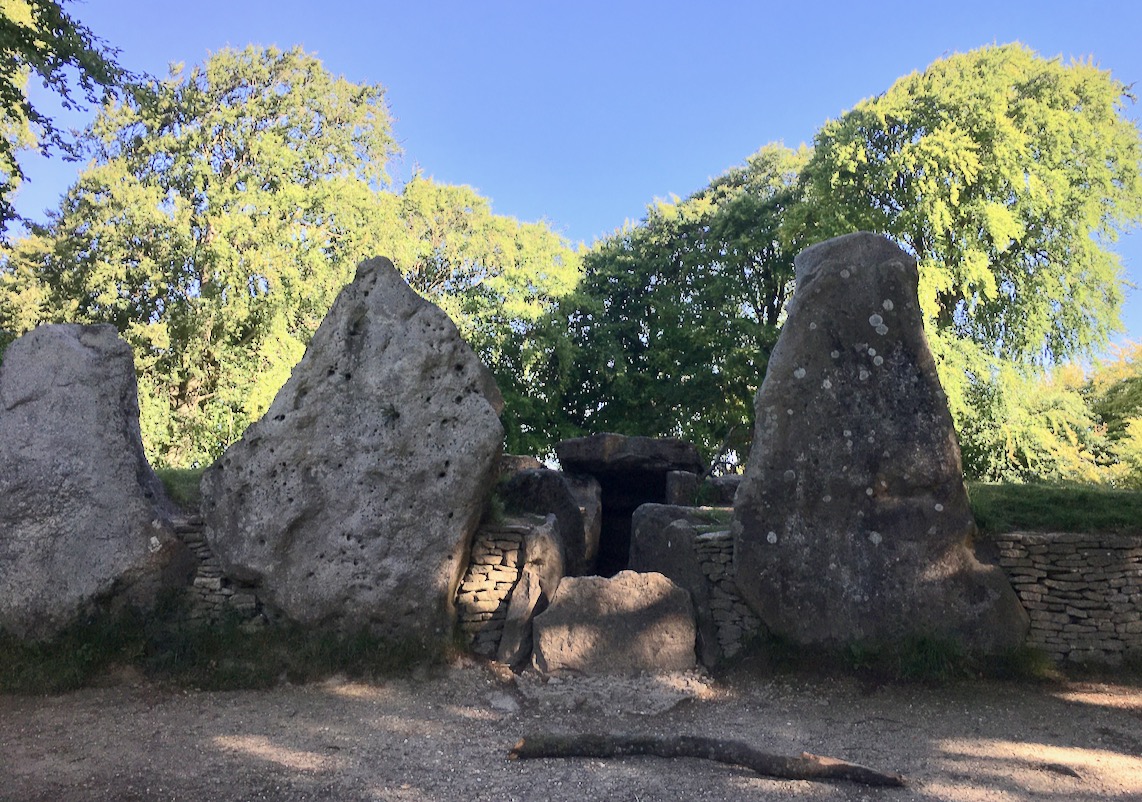 Let no rude hand disturb this hallowed sod,
Or move stones sacred to the Briton’s god
— Avenging spirits o’er the place preside,
And bold profaners evil will betide.
Sons of the soil,–with faithful watch and ward,
This holy precinct be it your’s to guard.

I’ve visited a few Neolithic sites in Britain but I don’t think I’ve ever been to one as serene and captivating as Wayland’s Smithy. These ancient places are always awe-inspiring, but the psychic echoes of pagan ceremonies that ripple through space-time can be discomforting and even terrifying. Unknowable, incomprehensible, yet somehow present, just over the edge of consciousness.

Wayland’s Smithy has something of that too but even so, the scene, fifty yards or so off the Ridgeway, a beech-enclosed bower that could have been missed without the signage, was verging on the idyllic. And with the burial mound in front of me, it appeared, that bright, chilly morning, as close as the Neolithic gets to the atmosphere of an old English churchyard.

Wayland’s Smithy is actually two long barrows, as these burial chambers are known, the first built between 3590 and 3555 BC, and the second built on top of this between 3460 and 3400 BC. This later construction with its standing stones and cruciform chamber is the one we see today, and to be clear, it is a partial reconstruction. One of the many remarkable things about the tombs is how short a time each was in use for. The estimate for the first is fifteen years at most and for the second, less than a hundred years.

The fourteen bodies disinterred from the first barrow in the 1960s were re-examined forty years later, and, as the BBC reported, ‘led experts to believe the people may have died in a Neolithic Age massacre’. Did the clan bury their dead and move away from the badlands of Berkshire, only to return a century later and build the new monument? Or was the second tomb the work of a different group altogether?

There is more on the history of Wayland’s Smith on the English Heritage website and Austin Kinsley’s Silent Earth site has a good post on the various archaeological investigations of the monument, which I won’t repeat here.

But what of the name? That came thousands of years later. The Neolithic folk who buried their dead here knew nothing of Wayland, the Norse god of metalworking. But the connection with Wayland was well-established by 955AD, when ‘Weland’s Smithy’ is mentioned in a charter. Though it’s impossible to tell how this association came about, I wonder whether those Saxon farmers, seeing an overgrown mound with an entrance, thought it was a cave rather than a man-made chamber. Wayland, as they knew, lived in a cave, and why not this one in Berkshire?

Then came the legend that if a passing traveller needed a new shoe for his horse, he was to leave it tethered by the chamber, along with a coin, and Wayland would fix it. Intriguingly, the excavation of the second mound in 1919 revealed two iron bars, as well as the remains of eight skeletons. You can read more about Wayland on David Nash Ford’s Royal Berkshire History website.