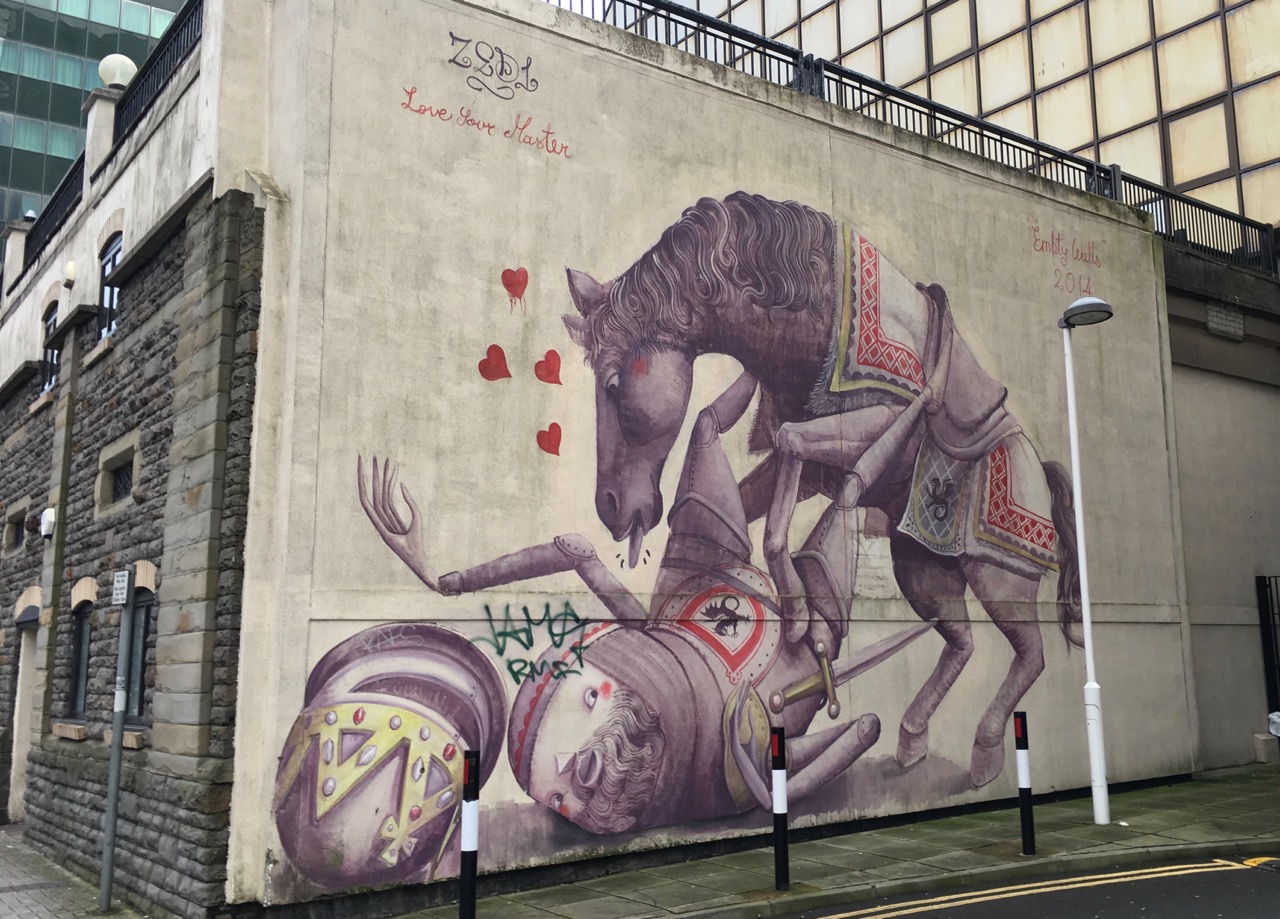 It seems a curious subject to choose for a public work of art, this mural near the centre of Cardiff. And, as with any state-funded art commission, there must have a few bureaucratic hurdles to jump before final approval was granted. When the artist made his pitch, did anyone on the committee laugh or splutter or quibble, or did they nod sagely, as befits men and women of the cultural establishment? I suspect it was the latter.

‘I have this idea for a mural of a knight and his horse…’
‘Ah, something Arthurian, something legendary? Excellent. We are a romantic race, we Welsh. Of course, you know that we are the real Britons. Yes, us, and not those Angles and Saxons over the border. Did you know that Merlin was born in Carmarthen? King Arthur himself was a Cornishman and the Cornish are the other ancient Britons that survive, Welsh in all but name.’
‘No, it’s nothing to do with Arthur and his crew. It’s any old knight and any old horse. I’m going to call it “Love Your Master”.’
‘So it’s about the spiritual bond between man and horse? Beautiful.’
‘Not so much spiritual as…You could call it the love that dares not neigh its name.’
‘Sorry, I’m not following you.’
The chairwoman looks around the meeting table: the faces of her colleagues are all blank. The Italian street artist known as Zed1 is wearing his bandana and is therefore inscrutable, but his English, honed by his experience of public commissions all over Europe, is perfect.
He continues. ‘When I say the horse loves his master, I mean he really loves his master.’
Another voice: ‘Are you talking about bestiality? I’m not sure…’
And another: ‘But surely it’s only bestiality if the human is the active partner. If it’s the animal, then…is there a word for it?’
Zed1 speaks again: ‘Inter-species sex.’
The committee, not wanting to seem prudish or behind the times, warms to the idea.
’It’s different.’
‘It’s edgy.’
‘It will challenge received ideas about love and relationships.’
‘But you won’t sensationalise the subject, will you?’ the chairwoman says nervously
The street artist shifts in his chair but says nothing.

When Zed1 completed his mural for Cardiff’s Empty Walls festival in 2014, it showed the horse poised over the tumbled knight with a large erection. Then came the outrage, which was excellent publicity for the festival. Wales Online reported one local resident’s complaint:

‘Can you imagine flinging open your curtains each morning to look out at that — a horse trying to have sex with a man? There’s quite a few families with small children living here and it’s hardly the sort of thing they’re going to want their little ones seeing. That’s not to say I disagree with for the general principle behind the project, I just think this is a step too far. Also, it’s the appendage in question which was added on last, so the guy who painted it clearly knew he was being a bit controversial.’

The appendage in question was soon painted over, with Zed1’s agreement. The festival curator, Helen Bur, said afterwards, ‘Personally, I think Zed1’s great but I’d rather he’d done something a bit more subtle in this instance’. Subtle or not, his now-castrated mural endures on Cardiff’s Bute Terrace. No doubt, future generations will wonder at what kind of society could possibly have objected to so playful a depiction of inter-species love.