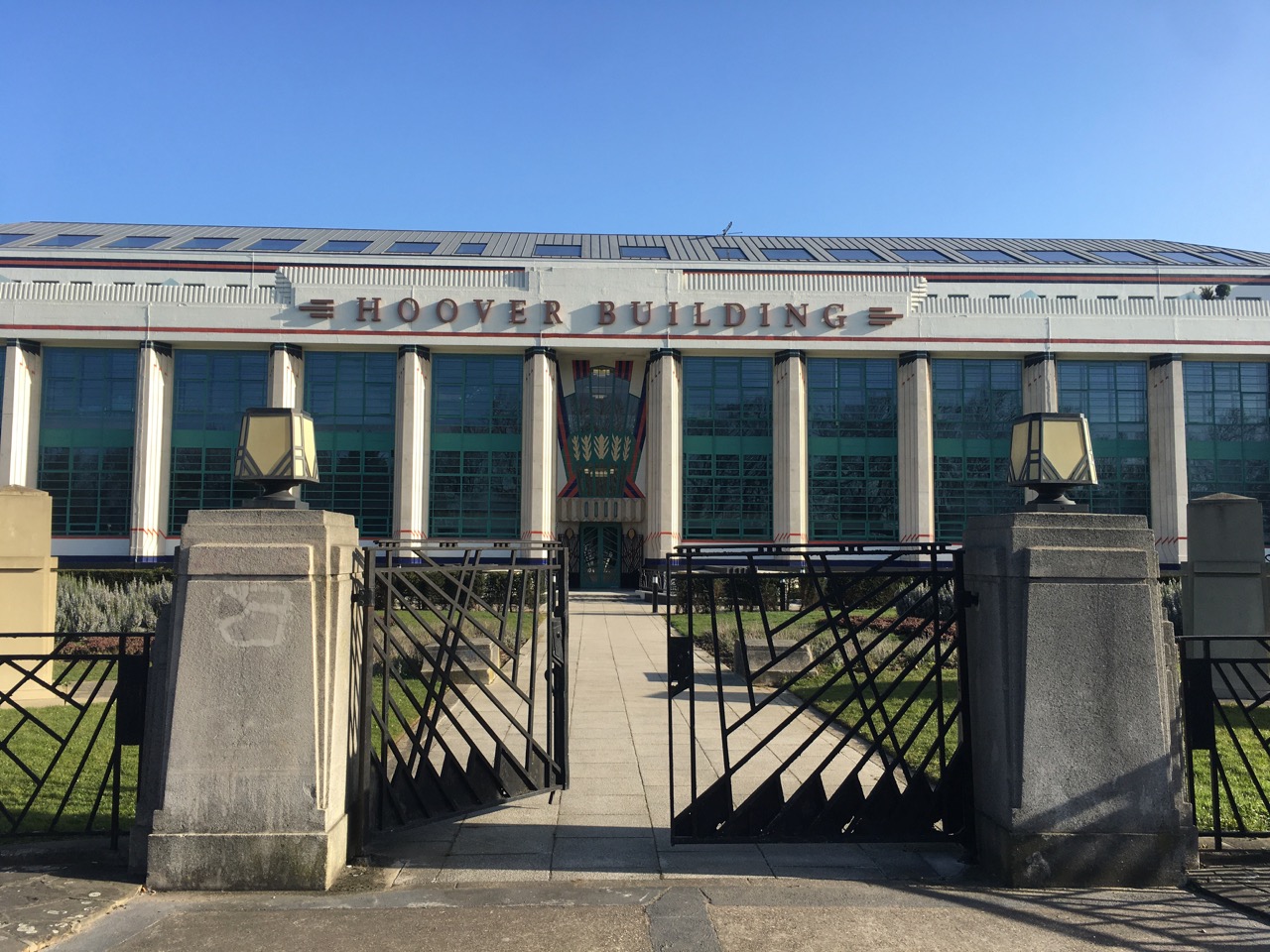 Five miles out of London on the Western Avenue,
Must have been a wonder when it was brand new.
Talkin’ ’bout the splendour of the Hoover factory
I know that you’d agree if you had seen it too.

There is a social history of Britain in the last one hundred years to be written using land and building conversions as its guiding idea. Arable land has become housing estates, churches have become apartment buildings, pubs have become coffee shops, and, as in the case of the Hoover Building in Perivale, factories have become supermarkets.

When the Hoover Building, designed by Wallis, Gilbert and Partners, opened in 1933 as the UK headquarters of the mighty Hoover Company of Ohio, it was a monument to the grandeur of the multinational corporation and the optimism of the machine age. Companies like Hoover, like Ford, like British Petroleum, had no comparators except the Roman Catholic Church in terms of their global reach, their transformative effect, and their wealth.

While the building which survives today was given over to administrative functions, a manufacturing plant soon sprung up alongside it. In 1982, a year short of its fiftieth anniversary, Hoover closed the site. It stood unused for seven years until Tesco bought it, demolished most of the outbuildings including the factory, and remodelled much of the main building into a supermarket. In 2017 parts of the building were converted by the Interrobang studio into swish apartments where, unlike in the supermarket, much of the Art Deco styling was retained or restored.

It’s taken decades for Art Deco architecture in Britain to receive its due. Writing in 1952, the haughty Nikolaus Pevsner called the Hoover Building ‘perhaps most offensive of the modernist atrocities along this road of typical by-pass factories’. While there have been countless modernist atrocities inflicted on Britain since the 1930s but it’s wrong to include the Hoover Building among them. Art Deco design proves it was possible for Modernism to combine form and function in a pleasing, sometimes beautiful, way.

A couple of decades after Pevsner’s severe judgment, John Betjeman, perhaps improbably, showed a better understanding of the building’s aesthetic as ‘a sort of Art Deco Wentworth Woodhouse – with whizzing window curves derived from Erich Mendelsohn’s work in Germany, and splashes of primary colour from the Aztec and Mayan fashions at the 1925 Paris Exhibition’.

And the Hoover Building is that rare thing: an industrial structure immortalised in song. In 1980, Elvis Costello released a single whose B side was the little gem, ‘Hoover Factory’.

Green for go, green for action,
From Park Royal to North Acton,
Past scrolls and inscriptions like those of the Egyptian age.
And one of these days the Hoover factory
Is gonna be all the rage in those fashionable pages