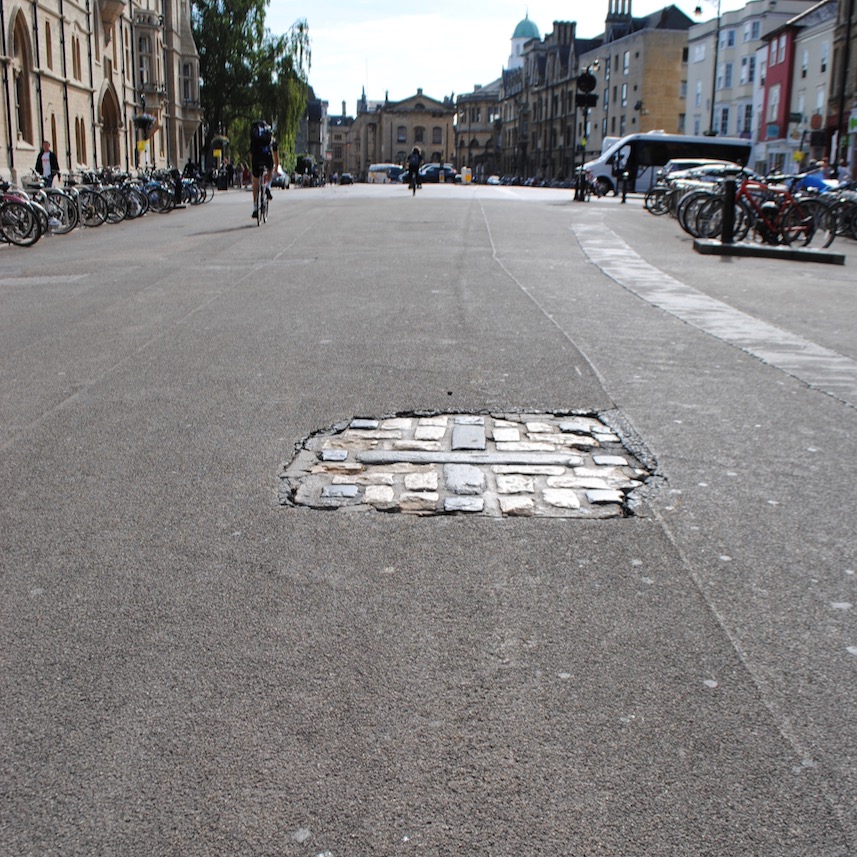 Walk down the middle of Broad Street in Oxford, taking care to avoid being hit by a car or, more likely, a bicycle, and you will see a cross of granite setts, exposed like an ulcer in the smooth tarmac of the road. This particular X marks the spot where the Oxford Martyrs — Hugh Latimer, Nicholas Ridley, and Thomas Cranmer — were burnt at the stake for heresy in the sixteenth century. All three had been arrested and tried by the Counter-Reformation forces of Queen Mary, and all three were found guilty.

Close by, set in the wall of Balliol College, is a plaque marking the events, carved by Heather Howes, and around the corner in St Giles is the grandest monument of all, the Martyrs’ Memorial, designed by George Gilbert Scott.

The three men, all leading figures in the English Reformation, had advanced the Protestant cause during the reign of Henry VIII, consolidated their reforms under his son Edward VI, and reaped the whirlwind when a Catholic monarch, Mary I, came to the throne. They were held in the Tower of London, and then moved to the Bocardo, Oxford’s town prison, in March 1554. In October 1555, Latimer and Ridley were burnt at the stake, a spectacle that Cranmer could  see through the bars of his cell window. He would suffer the same fate in March 1556.

It seems incredible to the twenty-first century observer that men and women were once burnt to death for their beliefs, but an effort of historical (and theological) imagination is required to understand what was really at stake. Theology in the sixteenth century was not an intellectual parlour game. The salvation or damnation of millions hinged on the correct interpretation of God’s will, in the form of Holy Scripture. Orthodoxy and heresy are the twin poles of any belief system, but who decides which is which?

The Church took a very hard line. Protestant dissent was not just undermining of political and social stability. The heretic, especially one with the position of Archbishop, as Cranmer was, or Bishop, as Latimer ad Ridley were, could lead thousands of souls astray if their heresy was taken up by an unthinking, uneducated populace. Severe, drastic action was necessary to root out heresy and enable salvation for ordinary Christians. Burning the heretic was a piece of theological symbolism as well as an act of retributive justice , The smoke and flames of the pyre were just a mild taste of the eternal, unquenchable fires of Hell. Weighed against the salvation of legions of ordinary men and women, the burning of a few trouble-makers counted for little. In any case, as their prosecutors would point out, the heretic was free to recant at any point up until death, though how anyone would have heard them amid the smoke and flames is another matter. And if they didn’t recant, they were damned to the far worse tortures of Hell anyway.

The most notable account of the Oxford burnings comes from George Foxe’s Actes and Monuments, better known as the Book of Martyrs. Here is an excerpt from his chapter on Latimer and Ridley:

Dr. Ridley, the night before execution, was very facetious, had himself shaved, and called his supper a marriage feast; he remarked upon seeing Mrs. Irish (the keeper’s wife) weep, “though my breakfast will be somewhat sharp, my supper will be more pleasant and sweet.” The place of death was on the north side of the town opposite Baliol College:—Dr. Ridley was dressed in a black gown furred, and Mr. Latimer had a long shroud on, hanging down to his feet. Dr. Ridley, as he passed Bocardo, looked up to see Dr. Cranmer, but the latter was then engaged in disputation with a friar.—When they came to the stake, Dr. Ridley embraced Latimer fervently, and bid him be of good heart. He then knelt by the stake, and after earnestly praying together, they had a short private conversation. Dr. Smith then preached a short sermon against the martyrs, who would have answered him, but were prevented by Dr. Marshal, the vice-chancellor. Dr. Ridley then took off his gown and tippet, and gave them to his brother-in-law, Mr. Shipside. He gave away also many trifles to his weeping friends, and the populace were anxious to get even a fragment of his garments.

Mr. Latimer gave nothing, and from the poverty of his garb, was soon stripped to his shroud, and stood venerable and erect, fearless of death. Dr. Ridley being unclothed to his shirt, the smith placed an iron chain about their waists, and Dr. Ridley bid him fasten it securely; his brother having tied a bag of gunpowder about his neck, gave some also to Mr. Latimer. Dr. Ridley then requested of Lord Williams, of Fame, to advocate with the queen the cause of some poor men to whom he had, when bishop, granted leases, but which the present bishop refused to confirm. A lighted fagot was now laid at Dr. Ridley’s feet, which caused Mr. Latimer to say, “Be of good cheer, Ridley; and play the man. We shall this day, by God’s grace, light up such a candle in England, as, I trust, will never be put out.” When Dr. Ridley saw the flame approaching him, he exclaimed, “Into thy hands, O Lord, I commend my spirit!” and repeated often, “Lord receive my spirit!” Mr. Latimer, too, ceased not to say, “O Father of heaven receive my soul!” Embracing the flame, he bathed his hands in it, and soon died, apparently with little pain; but Dr. Ridley, by the ill-adjustment of the fagots, which were green, and placed too high above the furze was burnt much downwards. At this time, piteously entreating for more fire to come to him, his brother-in-law imprudently heaped the fagots up over him, which caused the fire more fiercely to burn his limbs, whence he literally leaped up and down under the fagots, exclaiming that he could not burn; indeed, his dreadful extremity was but too plain, for after his legs were quite consumed, he showed his body and shirt unsinged by the flame. Crying upon God for mercy, a man with a bill pulled the fagots down, and when the flames arose, he bent himself towards that side; at length the gunpowder was ignited, and then he ceased to move, burning on the other side, and falling down at Mr. Latimer’s feet over the chain that had hitherto supported him.Every eye shed tears at the afflicting sight of these sufferers, who were among the most distinguished persons of their time in dignity, piety, and public estimation. They suffered October 16, 1555.

And here is an excerpt from his chapter on Cranmer, opening at the point at which Cranmer has affirmed his Protestant beliefs and disavowed his previous recantations:

Cranmer would have proceeded in the exposure of the popish doctrines, but the murmurs of the idolaters drowned his voice, and the preacher gave an order to lead the heretic away! The savage command was directly obeyed, and the lamb about to suffer was torn from his stand to the place of slaughter, insulted all the way by the revilings and taunts of the pestilent monks and friars. With thoughts intent upon a far higher object than the empty threats of man, he reached the spot dyed with the blood of Ridley and Latimer. There he knelt for a short time in earnest devotion, and then arose, that he might undress and prepare for the fire. Two friars who had been parties in prevailing upon him to abjure, now endeavoured to draw him off again from the truth, but he was steadfast and immoveable in what he had just professed, and before publicly taught. A chain was provided to bind him to the stake, and after it had tightly encircled him, fire was put to the fuel, and the flames began soon to ascend. Then were the glorious sentiments of the martyr made manifest;—then it was, that stretching out his right hand, he held it unshrinkingly in the fire till it was burnt to a cinder, even before his body was injured, frequently exclaiming, “This unworthy right hand!” Apparently insensible of pain, with a countenance of venerable resignation, and eyes directed to Him for whose cause he suffered, he continued, like St. Stephen, to say, “Lord Jesus receive my spirit!” till the fury of the flames terminated his powers of utterance and existence. He closed a life of high sublunary elevation, of constant uneasiness, and of glorious martyrdom, on March 21, 1556.

Latimer and Ridley at the stake, from Foxe’s Book of Martyrs (image from Wiki Commons)

It would be a mistake to think the burning of heretics was an exclusively Roman Catholic pursuit. Latimer was involved in the prosecution of at least one Catholic martyr and preached the sermon at his burning. Poor Michael Servetus, who argued against doctrine of the Trinity and had to escape the Spanish Inquisition, fled to Protestant Geneva. it was a brief respite. He was put on trial for heresy by the city authorities and burnt at the stake in October 1553, amid a pile of his own books.

Though the burning of heretics is no longer acceptable in liberal democracies, there are Christians who still defend it, given what’s at stake. While I was researching this post I found a discussion thread in which one contributor put the matter like this:

I think that the popes during that time felt that the killing of heretics was just. To figure, wouldn’t it be a lot better for the general population if a few mainstream heretics were killed, so that the whole population was not “infected” by the heresies of the few? What I am trying to say is that it wasn’t a terrible idea. Kill a few heretics to save the eternal souls of the population. That may seem harsh, but that is the basis of my assumption. Thanks.

The Roman Catholic historian Warren H Carroll, whose article on heretics had prompted the thread, replied:

Well stated. I agree with you.