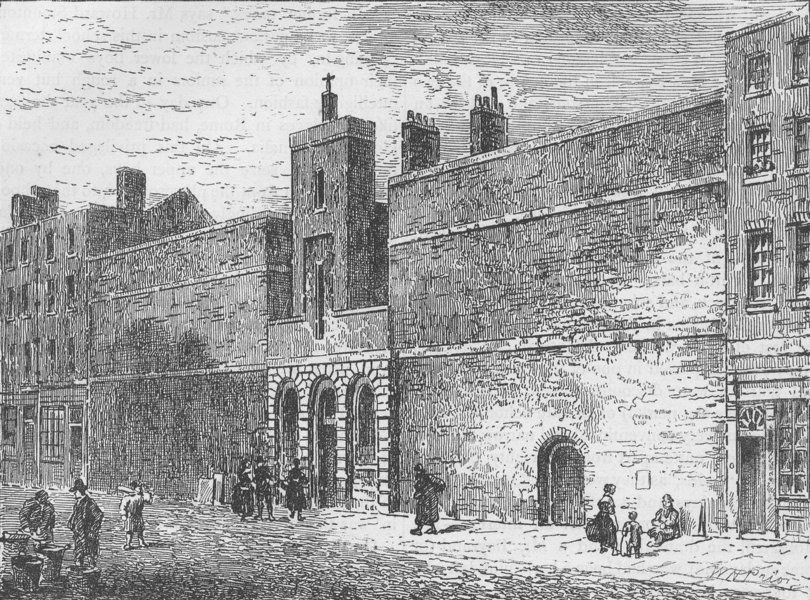 Fleet Prison, so-called because it  stood close to the River Fleet, was located just outside the medieval city walls, and is first recorded in the twelfth century. This building was burned down during the Peasant’s Revolt and its replacement was destroyed during the Great Fire. As with other gaols of the time, prisoners were charged for food, accommodation, and privileges, a system turned into a form of extortion by the prison warders. The prison was again destroyed by fire during the Gordon Riots of 1780, when it was stormed by the mob. During the nineteenth century disquiet with conditions in all major prisons increased, and Fleet Prison was no exception. Prisoners were abused, often kept drunk, and chained up or left to wander. Charles Dickens described their plight in The Pickwick Papers, when Mr Pickwick is imprisoned for debt. Attempts by prison reformers and a House of Commons committee to improve conditions came to nothing. The Fleet was closed in 1842 and demolished four years later.

Unlike Chidiock Tichborne, whom we met locked up in the Tower, Henry Howard had a reputation as a writer before his imprisonment. In fact he was a leading poet of his age, a friend of the older and more renowned Thomas Wyatt, and bears the distinction of having introduced blank verse into English poetry in his translations of Virgil. He was born around 1517 into an aristocratic family, his father the Earl of Surrey. In his teens Howard began service at the court of Henry VIII, becoming companion and tutor to the King’s illegitimate son, Henry Fitzroy. Through his twenties, Howard held various military and administrative positions, but in the complex politics of Henry’s court, he was regularly in and out of favour. His sense of his own status and self-worth was both a strength and a liability. His cousin Katherine Howard married the King in 1540 but was executed less than two years later. Howard did little to keep out of trouble himself. He was twice confined in Fleet Prison over the next two years, the first time for challenging someone to a duel, the second for riotous behaviour (see below). After leading a disastrous campaign in France in 1546, then unwisely incorporating royal insignia into his own coat of arms, and then intriguing about the succession to King Henry, Howard was charged with treason and executed on Tower Hill in 1547.

Howard wrote the poem ‘London, hast thou accusèd me’ during his second stay in the Fleet, where he was detained for another misdemeanour that was added to his lengthening list of crimes and offences (as eventually was the poem itself). Late in 1542 Howard had come to London after fighting in Scotland, and stayed over in the city during the winter. In February 1543, on Candlemas (the last night of the traditional reign of the Lord of Misrule) Howard and his friends rampaged through the city, smashing the windows of churches and houses, and pelting the whores on Bankside. Though Howard was at first repentant, he then composed these verses to justify his actions and cast himself as the true victim. His claim was that the riotous behaviour was justified by the sin and depravity into which London and its citizens had fallen. With considerable bravado, Howard casts himself as the holy avenger, the instrument of divine wrath. This poem also contains one of the earliest comparisons of London to Babylon, a trope that has continued to the present day.

‘London, hast thou accusèd me’

London, hast thou accusèd me
Of breach of laws, the root of strife?
Within whose breast did boil to see,
So fervent hot thy dissolute life,
That even the hate of sins, that grow
Within thy wicked walls so rife,
For to break forth did convert so
That terror could it not repress.
The which, by words, since preachers know
What hope is left for to redress,
By unknown means it likèd me
My hidden burden to express,
Whereby it might appear to thee
That secret sin hath secret spite;
From justice’ rod no fault is free;
But that all such as work unright
In most quiet are next ill rest.
In secret silence of the night
This made me, with a reckless breast,
To wake thy sluggards with my bow:
A figure of the Lord’s behest,
Whose scourge for sin the Scriptures show.
That, as the fearful thunder-clap
By sudden flame at hand we know,
Of pebble-stones the soundless rap
The dreadful plague might make thee see
Of God’s wrath that doth thee enwrap;
That pride might know, from conscience free,
How lofty works may her defend;
And envy find, as he hath sought,
How other seek him to offend;
And wrath taste of each cruel thought
The just shape higher in the end;
And idle sloth, that never wrought,
To heaven his spirit lift may begin;
And greedy lucre live in dread
To see what hate ill got goods win;
The lechers, ye that lusts do feed,
Perceive what secrecy is in sin;
And gluttons’ hearts for sorrow bleed,
Awakèd, when their fault they find.
In loathsome vice each drunken wight
To stir to God, this was my mind.
Thy windows had done me no spite;
But proud people that dread no fall,
Clothèd with falsehood and unright,
Bred in the closures of thy wall.
But wrested to wrath in fervent zeal
Thou haste to strife, my secret call.
Indured hearts no warning feel.
O shameless whore! is dread then gone
By such thy foes as meant thy weal?
O member of false Babylon!
The shop of craft! the den of ire!
Thy dreadful doom draws fast upon.
Thy martyrs’ blood, by sword and fire,
In heaven and earth for justice call.
The Lord shall hear their just desire;
The flame of wrath shall on thee fall;
With famine and pest lamentably
Stricken shall be thy lechers all;
Thy proud towers and turrets high,
Enemies to God, beat stone from stone;
Thine idols burnt, that wrought iniquity;
When none thy ruin shall bemoan,
But render unto the right wise Lord,
That so hath judgèd Babylon,
Immortal praise with one accord.

[This post is an extract from my book City of Verse: A London Poetry Trail, available on the Amazon, Apple Books, and Kobo ebook stores. Click here for more information.]