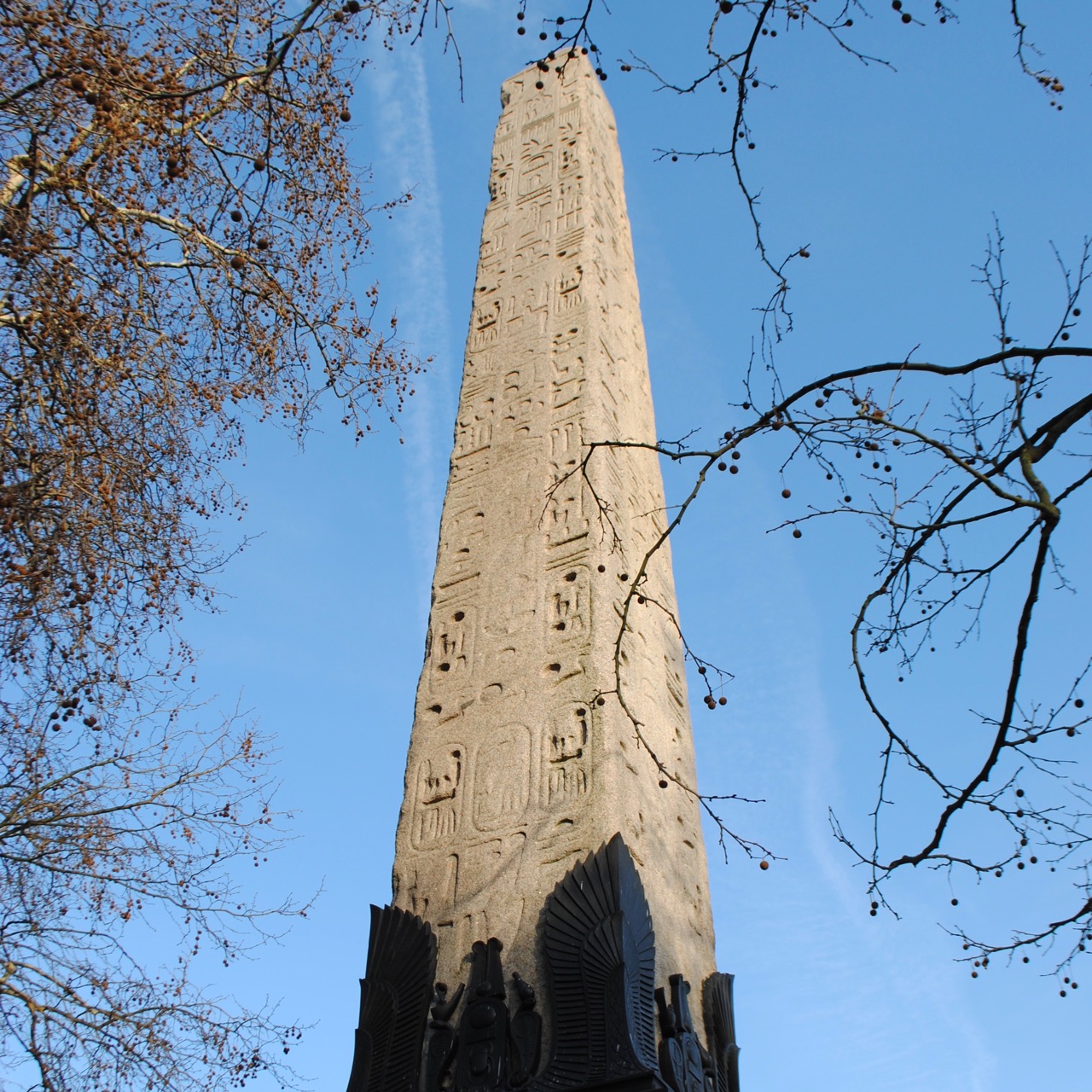 As a child of London, Cleopatra’s Needle has long been present in my memory and imagination. But it wasn’t until I began researching my book City of Verse: A London Poetry Trail* that I learnt that when this ancient obelisk was erected on the Victoria Embankment in 1878, a pair of what would nowadays be called time capsules were sealed in its base. Here’s the report from an edition of The Times that year which lists the items these jars contained:

The following is an authentic list of objects deposited in the two large earthenware jars enclosed in the core of the obelisk’s pedestal and supports, and now at length covered by the monolith’s base:—Standard foot and pound, printed by the Standard Department of the Board of Trade; bronze model of the obelisk, ½ in. scale to the foot, cast and presented by Mr. Joseph Whitley, of Leeds; copies of “Engineering” printed on vellum, with plans of the various arrangements and details employed in erecting and transporting the obelisk, together with its complete history, presented by the proprietors of the publication; jars of Doulton ware, presented by Doulton and Co.; a piece of the obelisk stone; complete set of British coinage, including an Empress of India rupee; parchment copy of Dr. Birch’s translation of the obelisk’s hieroglyphics; standard gauge to 1,000th part of an inch as sample of accurate workmanship, presented by J. Holtzapffel; portrait of Her Majesty the Queen; Bibles in various languages, presented by the British and Foreign Bible Society; Bradshaw’s railway guide; Mappin’s shilling razor; case of cigars; pipes; box of hairpins and sundry articles of female adornment; Alexandra feeding- bottle and children’s toys, presented by a lady; a Tangye’s hydraulic jack as used in raising the obelisk, presented by Tangye Brothers; wire ropes and specimens of submarine cables, presented by Mr. R. S. Newall; map of London; copies of the daily and illustrated papers; photographs of a dozen pretty Englishwomen, presented by Captain Henry Carter; a 2ft. rule; a London Directory; “Whitaker’s Almanac,” the last copy of the impression for the year presented by the publishers.

It’s a fascinating selection, prompting several questions: why chip off a piece of the obelisk to put inside the obelisk; why place a model of the obelisk inside (and why not a model of the obelisk within that model…); what were the ‘sundry articles of female adornment’; why not a map of Alexandria or even Heliopolis (the obelisk’s original location) as well as one of London? But the most intriguing items, to me anyway, are the ‘photographs of a dozen pretty Englishwomen, presented by Captain Henry Carter’.

This was the same Captain Henry Carter who had commanded the purpose-built iron cylinder, with small cabin attached, which had carried the obelisk on its journey from Alexandria to London. This vessel, named the Cleopatra, had been towed across the seas by a steamer, the Olga, skippered by one Captain Booth. Carter had a crew of seven men sharing that cabin, and their main job was checking that the Cleopatra remained afloat and seaworthy through the long and difficult voyage. The two captains communicated by megaphone if the weather was calm, and with a blackboard if it wasn’t. At night, lights were used.

It was plain sailing until the two vessels reached Algeria and then the weather turned. By the time they got to the Bay of Biscay, the conditions were terrible. The cylinder, and the obelisk within it, was almost sunk several times. Six of the Olga’s crew, sent on a rescue boat to the Cleopatra, were lost at sea. Eventually, Booth had to remove the cables linking the two boats to avoid a collision between them. Carter and his crew had no choice but to abandon the Cleopatra. It was found days later by a Spanish trawler, and taken to Spain by a salvage vessel for repairs. After several weeks of legal wrangling with the salvage company the Cleopatra recommenced its journey to England. It had been an exhausting, traumatic voyage for both crews.

Back to those dozen pretty English women. I’d like to think that those photographs were pinned to the walls of the tiny cabin that Carter shared with his seven crewmen, and that those images helped sustain them through the darkest times of the voyage, as female beauty has always sustained men. But this is unlikely. It seems more probable that Carter assembled the collection after his return to England. Were the photographs specially commissioned or were they collected by Carter from the window displays of photographers’ studios? And was Carter the sole judge of who were the fairest or did he seek advice from others? Did the women concerned even know of this honour?

The notion of beauty as something objective and admirable, a notion accepted almost with question in Carter’s time, has a curious duality in our own. Though we, being humans,  are still drawn to beauty in general and female beauty in particular, it is considered bad taste to point this out. To praise one person’s beauty is thought to implicitly condemn another’s lack of it. Exalting beauty disparages the average spectrum of appearance that most of us occupy. Discrimination is, well, discriminatory, and against the spirit of the age. Love of beauty is the modern love that dare not speak its name. Double-think rules. Beauty is what drives the views and likes of the preening models of Instagram, not ’empowerment’ or ‘body positivity’. What is thought and said in right-thinking circles is not how most of us think and behave in actuality. Beauty retains the power it has always had, and female beauty continues to seduce both men and women.

Of course, Carter’s twelve Englishwomen were characterised by The Times reporter as pretty rather than beautiful. In ordinary language, prettiness has connotations of superficiality and immaturity, whereas beauty has depth and can be awe-inspiring. Was this distinction recognised in Carter’s time? I expect so, though the two qualities are related and perhaps not so distinct in many cases. Besides, could they not have been both beautiful and pretty in Carter’s eyes?

Almost a century and a half later, those twelve Englishwomen are now mysterious. The Times report did not name them, and nor did any other newspaper report of the time, at least none that I’ve been able to find. In his book Egyptomania, Bob Brier covers the transportation of Cleopatra’s Needle to London and its erection on Victoria Embankment in some detail but does not mention the earthenware jars or the dozen women confined within them. So as to who they were, and how Carter acquired the photographs, and whether the women were aware of the matter, remain matters of speculation.

But the jars are still there, sealed up in the base of the obelisk. If they have remained air-tight and water-tight in that dark, damp domain, then perhaps the photographs have been preserved and can be disinterred one day, a dozen pretty Englishwomen brought back from the dead to a kind of life.

*Tennyson wrote a commemorative poem which was to have been inscribed on the base of the obelisk. Bu the inscription was never made, supposedly because one of its lines upset Sir Erasmus Wilson the dermatologist and philanthropist, who had paid for the transportation from Egypt.