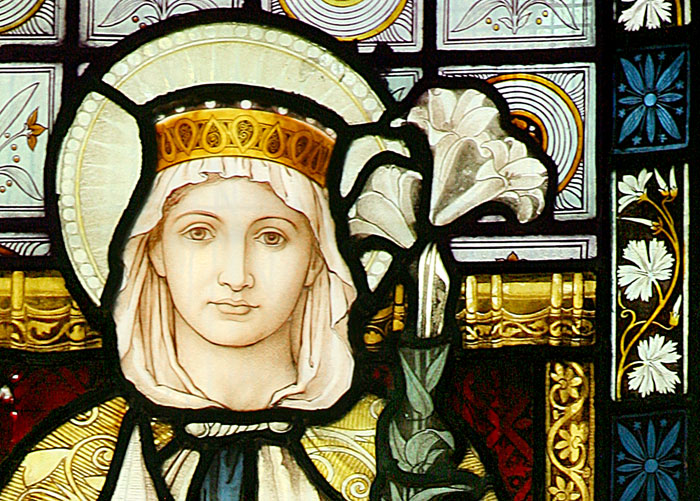 An angel that sulf nyght to that mayde cam
And bad hire oute of the kinges syght wende, that was so grame.
The levedy wende by nyght fram hure sustren tho
With somme that heo with hure toke – tweyne, witthoute mo.
To Temese heo yede and fonde a bote al preste, thorw Godes sonde,
And therin heo fonde an angel that broght hem to the londe.
For dred of the king heo wende, as God hit wolde,
Ne dorste heo come at non toune, to dwelle at non holde.
In a wode that Benesy yclyped ys al day
Thre wynter in an hole woned, that seylde me hure say.
A mayde that seve yere ne myght nothing yse
Cam to hure in the wode, and felle adoun a kne.
Hure eyghen that holy mayde wysche with water of hure honde,
And as hole as any fysche that maide gan up stonde.

An angel to the holy maid appeared on that same night
And bid her flee as best she could the furious king’s might.
The lady fled by night from her sisters all;
Only a few she took with her —two of them, no more.
To the Thames she went and found a boat waiting, by God’s plan,
And therein she found an angel who took them to the land.
For dread of the king she fled that place, as God it did provide,
But dared not go to any town, nor in any house hide.
As best she might she hid herself in a wood called Binsey
Three winters in a cave she lived, where no one could her see.
A maiden who for seven years nothing could see
Came to her within the wood, and fell down upon her knee:
Her eyes the holy maiden washed with water in her hands
And as whole as any fish the maid again did stand.

(from the South English Legendary, 14C, translation by Eleanor Parker)

The Saxon princess-abbess-saint Frideswide was not the founder of Oxford: there was certainly a settlement at the confluence of the Cherwell and the Thames well before her time. But she has a claim to be one of the founders of the idea of Oxford, the notion of the city as a nexus of learning, religion, and occasional miracles.

Such was the regard in which Frideswide was held that by the tenth century she was established as the local saint of the city and of the university, a position she continues to hold. Her biographies, a mixture of fact, conjecture, and legend are not always consistent. The Oxford Dictionary of National Biography identifies two main accounts of her life, and one of these, from William of Malmesbury, identifies her as the daughter of Didan, king of Oxford, and his wife, Sefrida. At this time, the seventh century, Oxfordshire was within the kingdom of Mercia, so Didan was a more of a local ruler than a sovereign king. Frideswide became an abbess when Didan founded a nunnery for her and twelve other Saxon princesses in the city, on the site of what is now Christ Church College.

And now legend mingles with history. At some point Frideswide caught the attention of another Mercian local king, Algar of Leicester, who made for Oxford to carry her off. But before he reached the city, Frideswide fled up the Thames by boat, guided by an angel, and alighted with her companions at ‘a wood called Binsey’. Meanwhile, Algar was either struck blind when he tried to enter the city, or fell from his horse and broke his neck when he left it. (The story of Algar’s blinding seems to have been taken seriously enough that both Henry II in 1180 and Edward I in 1275 declined to enter the city’s gates.) Either way, Frideswide escaped Algar’s clutches. But more importantly for her later fame, a miracle occurred at Binsey. While she was praying for her deliverance, a well with healing powers sprang up there.

Frideswide dedicated the well, and the church that was built close by it, to the Christian martyr St Margaret of Antioch. The fame of St Frideswide and her holy well spread throughout the kingdom and Binsey became an important pilgrimage destination. Stories of the blind and the lame being healed were numerous. Katherine of Aragon came here in 1511, hopeful that the pilgrimage and the waters would help her produce a male heir for Henry VIII. Sadly for Katherine, there was to be no miracle this time.

During medieval times, the well was called a treacle well, the word ‘treacle’ denoting a healing or medicinal liquid. In his 1865 novel Alice’s Adventures in Wonderland, Lewis Carroll, aka the Christ Church don Charles Dodgson, referenced the Binsey well in a tale told by the Dormouse:

‘Once upon a time there were three little sisters,’ the Dormouse began in a great hurry; ‘and their names were Elsie, Lacie, and Tillie; and they lived at the bottom of a well—’
‘What did they live on?’ said Alice, who always took a great interest in questions of eating and drinking.
‘They lived on treacle,’ said the Dormouse, after thinking a minute or two.
‘They couldn’t have done that, you know,’ Alice gently remarked; ‘they’d have been ill.’
‘So they were,’ said the Dormouse; ‘very ill.’
Alice tried to fancy to herself what such an extraordinary ways of living would be like, but it puzzled her too much, so she went on: ‘But why did they live at the bottom of a well?’
‘Take some more tea,’ the March Hare said to Alice, very earnestly.
‘I’ve had nothing yet,’ Alice replied in an offended tone, ‘so I can’t take more.’
‘You mean you can’t take less,’ said the Hatter: ‘it’s very easy to take more than nothing.’
‘Nobody asked your opinion,’ said Alice.
‘Who’s making personal remarks now?’ the Hatter asked triumphantly.
Alice did not quite know what to say to this: so she helped herself to some tea and bread-and-butter, and then turned to the Dormouse, and repeated her question. ‘Why did they live at the bottom of a well?’
The Dormouse again took a minute or two to think about it, and then said, ‘It was a treacle-well.’
‘There’s no such thing!’ Alice was beginning very angrily, but the Hatter and the March Hare went ‘Sh! sh!’ and the Dormouse sulkily remarked, ‘If you can’t be civil, you’d better finish the story for yourself.’
‘No, please go on!’ Alice said very humbly; ‘I won’t interrupt again. I dare say there may be one.’
‘One, indeed!’ said the Dormouse indignantly. However, he consented to go on. ‘And so these three little sisters—they were learning to draw, you know—’
‘What did they draw?’ said Alice, quite forgetting her promise.
‘Treacle,’ said the Dormouse, without considering at all this time.

And that dormouse has another connection with the well. The current structure around the well-head dates from 1874, when, according to the Latin inscription (translation courtesy of Lydia Carr):

TJ Prout of Christ Church, Vicar, brought back into use St Frideswide’s well, made to produce [flow] by the prayers of St Frideswide, and for long collapsed and [fouled] polluted, AD 1874

In his poem ‘Binsey, the Green Woman and the Wood of Dreams’, Heathcote Williams says that Carroll’s dormouse was inspired by Prout:

The Binsey vicar in Lewis Carroll’s day was called Prout
And Prout was the model for Carroll’s sleepy dormouse.
Prout would fall asleep in his own sermons so he’s made to take part
In a mad Tea Party in the March Hare’s house.

From a Saxon saint to a sleepy, surreal dormouse: I find these continuities of British history both moving and inspiring.

Eleanor Parker’s excellent A Clerk of Oxford blog, from which the opening verses of this post are pinched, has more on Frideswide and Binsey. The image of St Frideswide at the top of this post is from the stained glass by Henry Holiday at the church St Mary Magdalene, Paddington, in London.