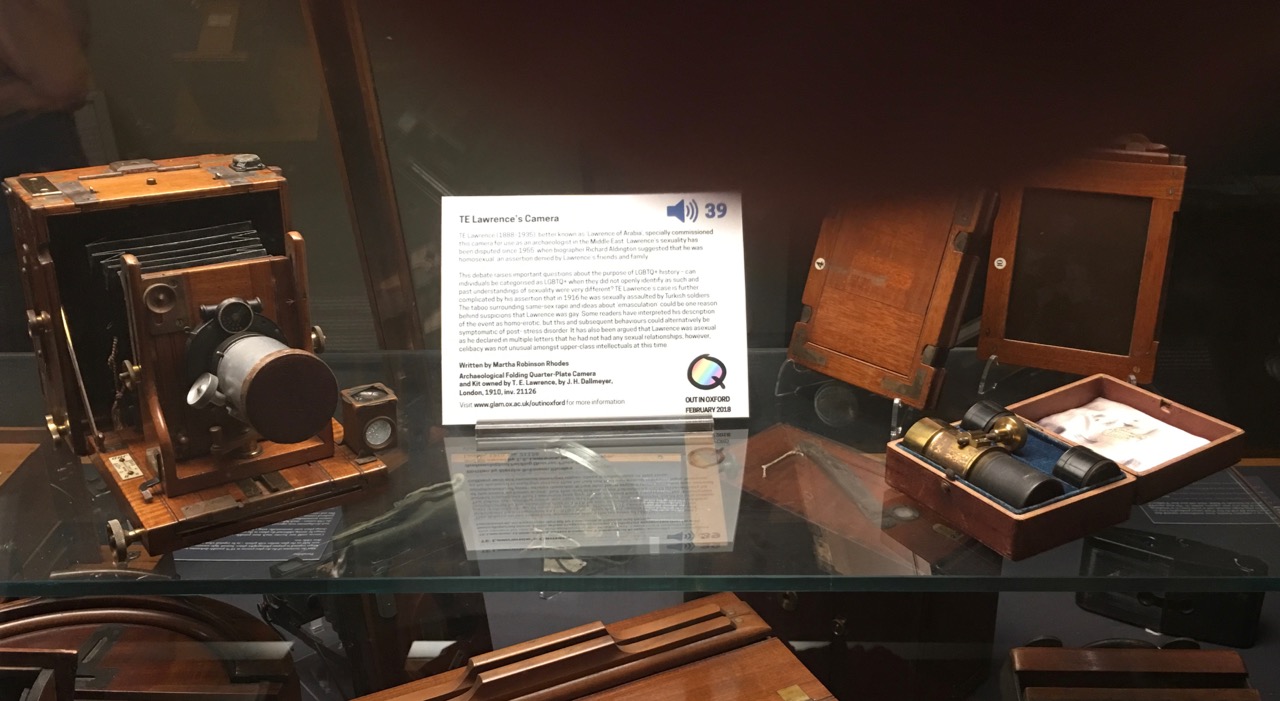 Within the collection of the Museum of the History of Science in Oxford are a number of objects varnished with the patina of past celebrity. Here are Elizabeth I’s astrolabe, Lewis Carroll’s photographic developing kit, and a blackboard, its chalk-inscribed equations intact, used by Albert Einstein. Here too is a camera made in the workshop of JH Dallmeyer of London for TE Lawrence, otherwise known as Lawrence of Arabia.

Before he achieved fame — and notoriety — as an intelligence officer and author, Lawrence was an archaeologist. He was also, to use the old-fashioned term, an Oxford man, having read modern history at Jesus College. In 1910, with the help of Dr Hogarth, keeper of the Ashmolean Museum (then housed in the building which is now the Museum of the History of Science), Lawrence was given a financial award by Magdalen College and a place on the British Museum’s expedition to Carchemish in Syria. The camera now on display was made to record those excavations.

Though this was not Lawrence’s first visit to the Middle East — he had travelled through Syria and Lebanon in 1909, studying the castles left behind by the Crusaders — it was on this extended stay, from 1911 to 1914, that that his affinity with the Arab people began. In a letter to his family he wrote that:

I don’t think anyone who tasted the East as I have would give it up half-way, for a seat at high table and a chair in the Bodleian.

An important formative period in Lawrence’s life then, and his camera is an object that might have enabled some insights into the early use of photography in archaeological investigation. So what do we learn of any of this from the accompanying label in the museum’s display case? It’s worth quoting in full:

TE Lawrence (1888-1935), better known as ‘Lawrence of Arabia’, specially commissioned this camera for use as an archaeologist in the Middle East. Lawrence’s sexuality has been disputed since 1955, when biographer Richard Aldington suggested that he was homosexual, an assertion denied by Lawrence’s friends and family.

This debate raises important questions about the purpose of LGBTQ+ history – can individuals be categorised as LGBTQ+ when they did not openly identify as such and past understandings of sexuality were very different? TE Lawrence’s case is further complicated by his assertion that in 1916 he was sexually assaulted by Turkish soldiers. The taboo surrounding same-sex rape and ideas about ‘emasculation’ could be one reason behind suspicions that Lawrence was gay. Some readers have interpreted his description of the event as homo-erotic, but this and subsequent behaviours could alternatively be symptomatic of post-traumatic stress disorder. It has also been argued that Lawrence was asexual as he declared in multiple letters that he had not had any sexual relationships; however, celibacy was not unusual amongst upper-class intellectuals at this time.

And there you have it. In other words we learn nothing about the purpose of the camera or Lawrence’s life and work during this period. Not a thing. The label was written by Martha Robinson Rhodes, a PhD Researcher at Birmingham University (thesis title: ‘A Queer Oral History of Multiple-Gender-Attraction and Bisexuality in 1970s and 1980s Britain’), as a contribution to ‘Out in Oxford: An LGBTQ+ Trail of the University of Oxford’s Collections’.

Leave aside the poor grammar of the opening sentence (the camera itself was not, presumably, commissioned ‘for use as an archaeologist in the Middle East’); leave aside the knowledge that Richard Aldington’s book is regarded by modern biographers of Lawrence as a hatchet job; still, one has to query the point of these observations in this context. Anyone familiar with Lawrence’s life will know that the question of his sexuality is a open one and probably the least interesting thing about him. Speculation on the matter is perhaps understandable, given the modern view that sexuality is the secret key to understanding the person and their life. My question is, what has it to do with Lawrence’s camera in particular and with the history of science in general?

Richard Bruce Parkinson, Professor of Egyptology at the Queen’s College, writes of the Out in Oxford trail that it ‘reassuringly reminds us that LGBTQ+ people have always been an integral part of human life and that our varied identities are not limited to the usual set of media stereotypes’. How strange to complain about stereotypes and then deal with Lawrence’s ambiguous (and unknowable) sexual identity by shoehorning him into the LGBTQ+ category. This seems to be less about what Lawrence may or may not have thought or felt or done, and more about boosting the membership of the tribe.

Identity politics is invading our cultural spaces like Japanese knotweed — tenacious, aggressive, and difficult to eradicate once it’s gained a foothold. Its tribunes often have a tin ear for context, evidence, and even — dearie me — taste. Good luck to those parents visiting the museum who have to explain same-sex rape and the ‘taboo surrounding it’ to their children. I suppose they can always get one of the museum’s attendants to spell it out for them.

(© Museum of the History of Science)

As a coda, here’s what the museum’s website says about the object:

Date: 1910
Maker: JH Dallmeyer, London
T.E. Lawrence ordered this camera from J.H. Dallmeyer in 1910 for his archaeological photography at Carchemish in Syria. The camera’s versatility (including full movement of lens panel and accommodation for wide angle-lens lens) was well suited for this work. These quarter plate hand cameras were popular with amateur photographers.