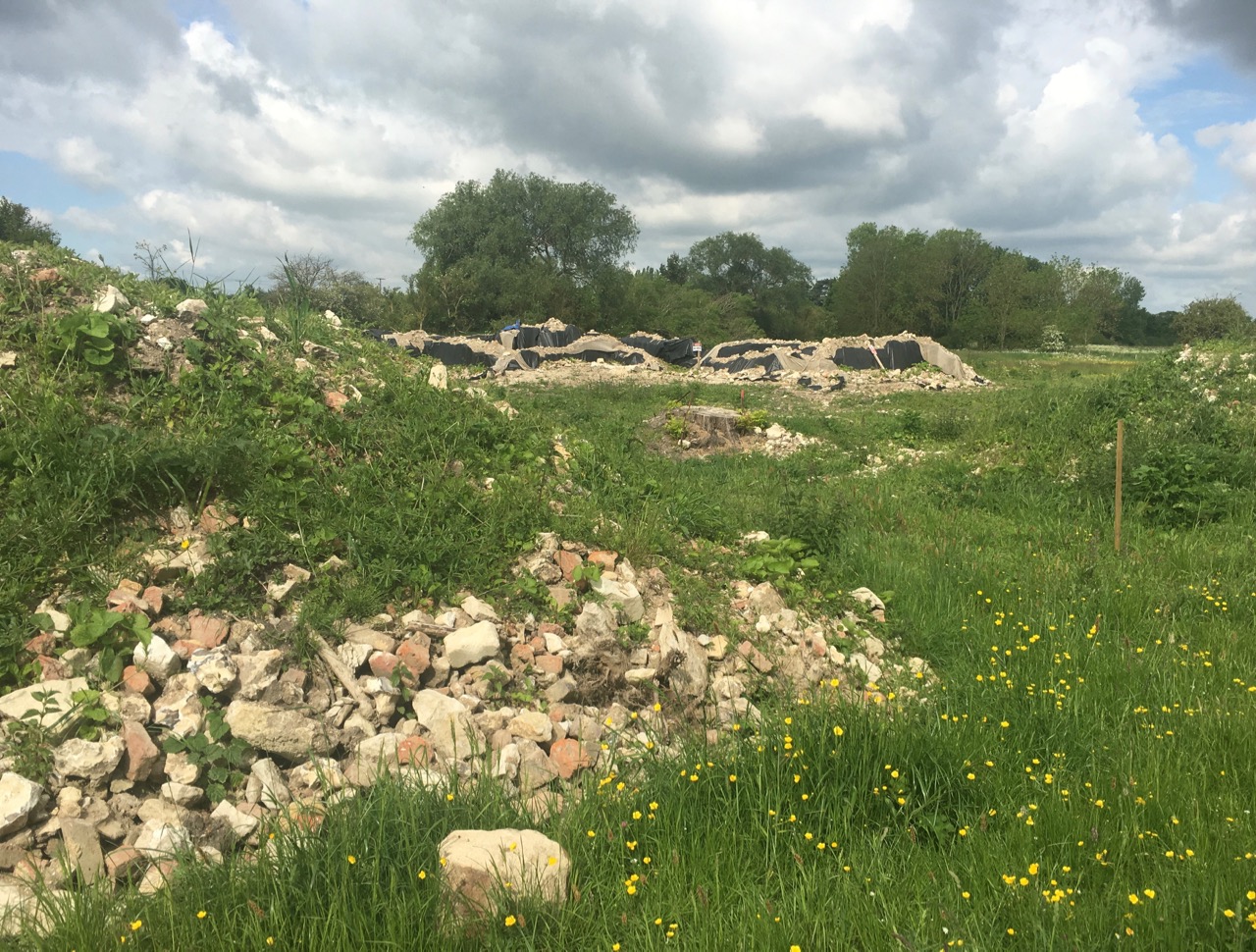 Perhaps in this neglected spot is laid
Some heart once pregnant with celestial fire;
Hands, that the rod of empire might have sway’d,
Or wak’d to ecstasy the living lyre.
(‘Elegy Written in a Country Churchyard’ – Thomas Gray)

My last post was about the effects of Victorian railway construction on a London churchyard. The present day High Speed 2 (HS2) railway project is a twenty-first century counterpart, carving a route through several hundred miles of rural England. And on this route are three burial grounds containing 30,000 graves, all of whose occupants will have to be exhumed and reburied elsewhere. One of these sites is the deserted medieval village of Stoke Mandeville, which lies just south of the modern village of the same name. There are few visible remains of the old village other than the rubble which was once the church of St Mary the Virgin and the contours of ancient earth banks, watercourses, and fishponds. The path of HS2 will obliterate these remains, wiping the old village from the map once and for all.

According to the Buckinghamshire Archaeological Society, the village was an important Saxon settlement and is mentioned in the Domesday Book (twenty-four families, three slaves, and a mill valued at ten shillings). It’s not clear when the centre of the village moved northwards, though the turnpike road of 1822 bypassed it completely, indicating that it was probably deserted by then. Even so, St Mary the Virgin remained the parish church until 1866, and the churchyard received its last burials in 1908. The church building was pulled down in 1966, having been in a state of ruination for decades.

The site has never been excavated and lacks the legal protection of having been ‘scheduled’ as a nationally important archaeological site. It is an unexplored remnant of Saxon and Norman England, which the HS2 planners probably had little idea of when they drew their lines on the map. Since then, HS2 Ltd has employed a specialist firm, LP Archaeology, to excavate the site and remove any significant material they find, with a promise that ‘during different stages of the works we will also be taking drone photography of the site to record our progress and to form part of the historical record of the works’. All I can find on-line so far is a CGI reconstruction of St Mary the Virgin and a brief video about a ‘Heritage Open Day’ held last September. Curiously, the LP Archaeology website does not even mention the project. On the day I visited, the site was surrounded by barriers and some of the ruins were under covers.

The rest of it, the outlines of those earth banks, watercourses and fishponds, will be bulldozed into oblivion. There is also the matter of the estimated 2,600 burials in the old churchyard which must be recovered and reinterred at some other (and yet to be determined) site. The Buckinghamshire Archaeological Society has proposed a memorial garden in the new village, a proposal which, as far as I can tell, has not been taken up by HS2.

There are always trade-offs to be made in construction projects, and indeed in any kind of economic development. Old Stoke Mandeville is a small and visually unimpressive site, whereas HS2 an undertaking of national importance, vital, or so we are told, to our future prosperity and the regeneration of the North. But the word ‘controversial’ fails to do it justice. It is a hugely expensive project, coming in at £55.7 billion according to the most recent budget (and up from £32 billion just a few years ago). A House of Lords committee recently warned that spending on it is out of control.

The proponents of HS2 claim that whatever the costs, the benefits will outweigh them. The business case has slipped from whatever tethering it had in the ‘real’ world and is now an exercise in the dubious art of long-term economic forecasting. By the time the projected benefits have been realised or not, the politicians and technocrats touting HS2 will be as dead and forgotten as those who lie in the derelict churchyard of St Mary the Virgin.

I don’t want to sound like a NIMBY; I’m not. I think our country needs housing not high-speed rail. A housing development could accommodate the remains of Old Stoke Mandeville. The ancient could co-exist with the modern. As it is, the cost of the loss of a historical site cannot be quantified and entered onto a spreadsheet; one is left with the uneasy feeling that another trace of ancient England will soon be erased.