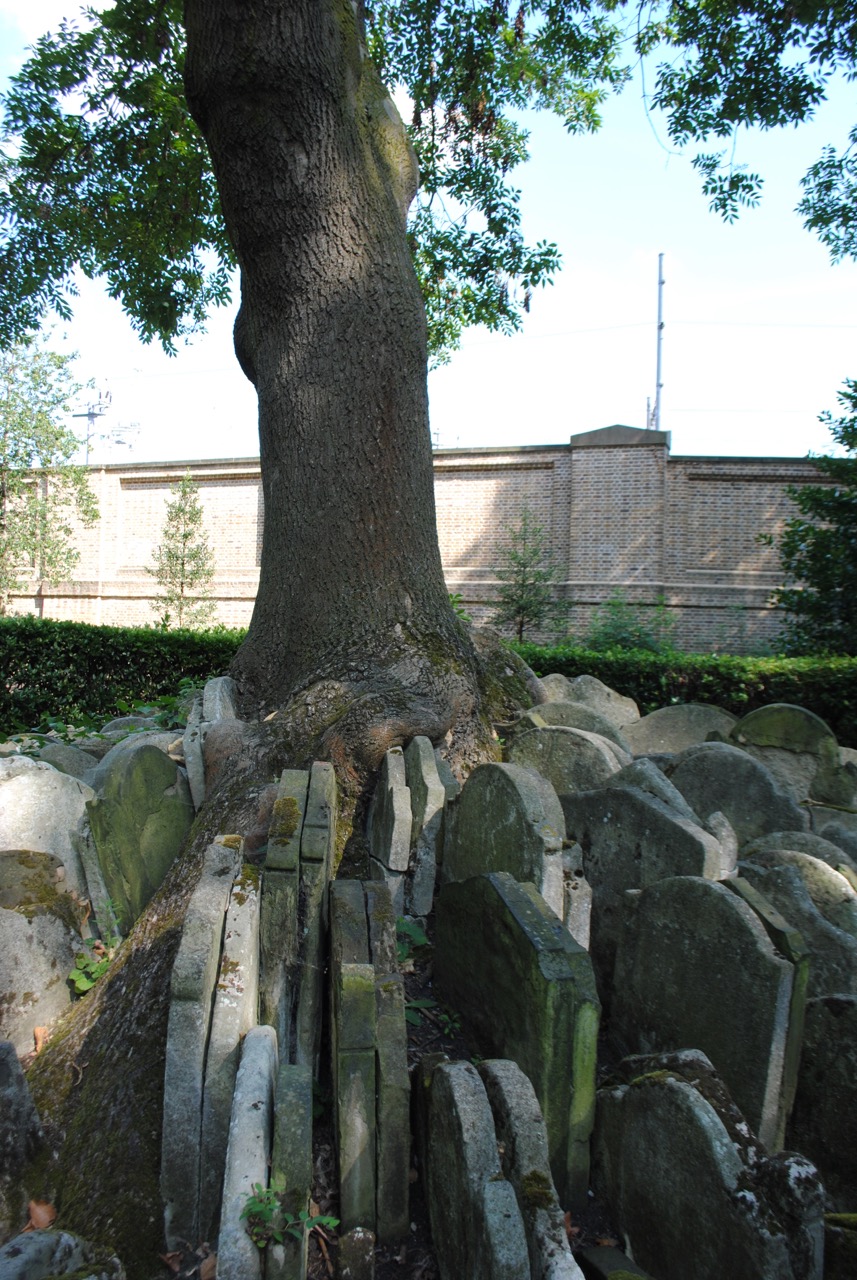 Because the poet had stood in the churchyard
and watched, by flarelamps, the graves unearthed,
watched each night the unclaimed bodies
packed away, the graveyard cinch and cinch
its boundaries so—why?—so trains might pass;
because the poet had scanned the sky,
the belfries and steeples, dark against
a paler dark; because he had heard
a fox bark, sonorous and long—
three barks, horn-like
but melancholy,

the young man wanted the same churchyard,
the same gradually darkening, quiet sky.
Along the railroad berm, sparse clumps of heather
twitched and stilled. Twitched and stilled.
Gritty semaphores. Then he stood in the churchyard
where Hardy once stood. There was the ash tree,
and there—in memoriam perhaps?—
the upright headstones placed in rings
around its trunk. Just three or four
evenly spaced, concentric rings.
But no,

that was eighty years ago. Now the ash tree’s roots
had nudged the rings into a jumbled cluster,
had tipped, in little groups of two and three,
some stones together. One and one
and two and three. Is that a code?
Nature’s logarithmic shrug?

The coming of the railways gouged, scoured, and re-made the British landscape more dramatically than any process since the glaciers of the Ice Age went to work millennia before. Embankments, cuttings, bridges, tunnels were built, embedded, imposed, as the web of iron, wood, and stone was spun across the island. Farmland was grabbed and slums were demolished to make way for tracks and stations. And the railway behemoth was no respecter of sacred earth: churchyards and burial grounds too had to make way for the new mode of transportation.

In the 1860s the expansion of the Midland Railway claimed part of the churchyard of St Pancras Old Church, one of London’s most ancient Christian sites. The project of exhuming and reburying the bodies elsewhere was taken on by the firm of Arthur William Blomfield, a leading Gothic architect of the age. Blomfield assigned a young draughtsman from Dorset, Thomas Hardy, to supervise the works. Still in his twenties, Hardy was writing poetry in his spare time, but was yet to begin the novel-writing that made him famous,

The exhumation, and Hardy’s part in it, is commemorated by what has become known as the Hardy Tree, an ash tree that stands in the churchyard, seemingly shored up by the stones that cluster around its trunk. It’s unclear whether it was Hardy himself who had the notion to arrange the leftover stones in this way. But over the decades tree and stones have fused into a single structure, an organic momento mori, Hardyesque in spirit if perhaps not in origin.

More than a decade later, when he was living at Wimborne Minster in Dorset, Hardy witnessed similar exhumations at the local church. This sight, and his memories of the St Pancras episode, inspired his poem, ‘The Levelled Churchyard’:

“O passenger, pray list and catch
Our sighs and piteous groans,
Half stifled in this jumbled patch
Of wrenched memorial stones!

“We late-lamented, resting here,
Are mixed to human jam,
And each to each exclaims in fear,
‘I know not which I am!’

“The wicked people have annexed
The verses on the good;
A roaring drunkard sports the text
Teetotal Tommy should!

“Where we are huddled none can trace,
And if our names remain,
They pave some path or p-ing place
Where we have never lain!

“There’s not a modest maiden elf
But dreads the final Trumpet,
Lest half of her should rise herself,
And half some local strumpet!

“From restorations of Thy fane,
From smoothings of Thy sward,
From zealous Churchmen’s pick and plane
Deliver us O Lord! Amen!”

(In the extract from her poem ‘The Hardy Tree’ which opens this post, Linda Bierds imagines the mathematician Alan Turing wandering in St Pancras churchyard.)