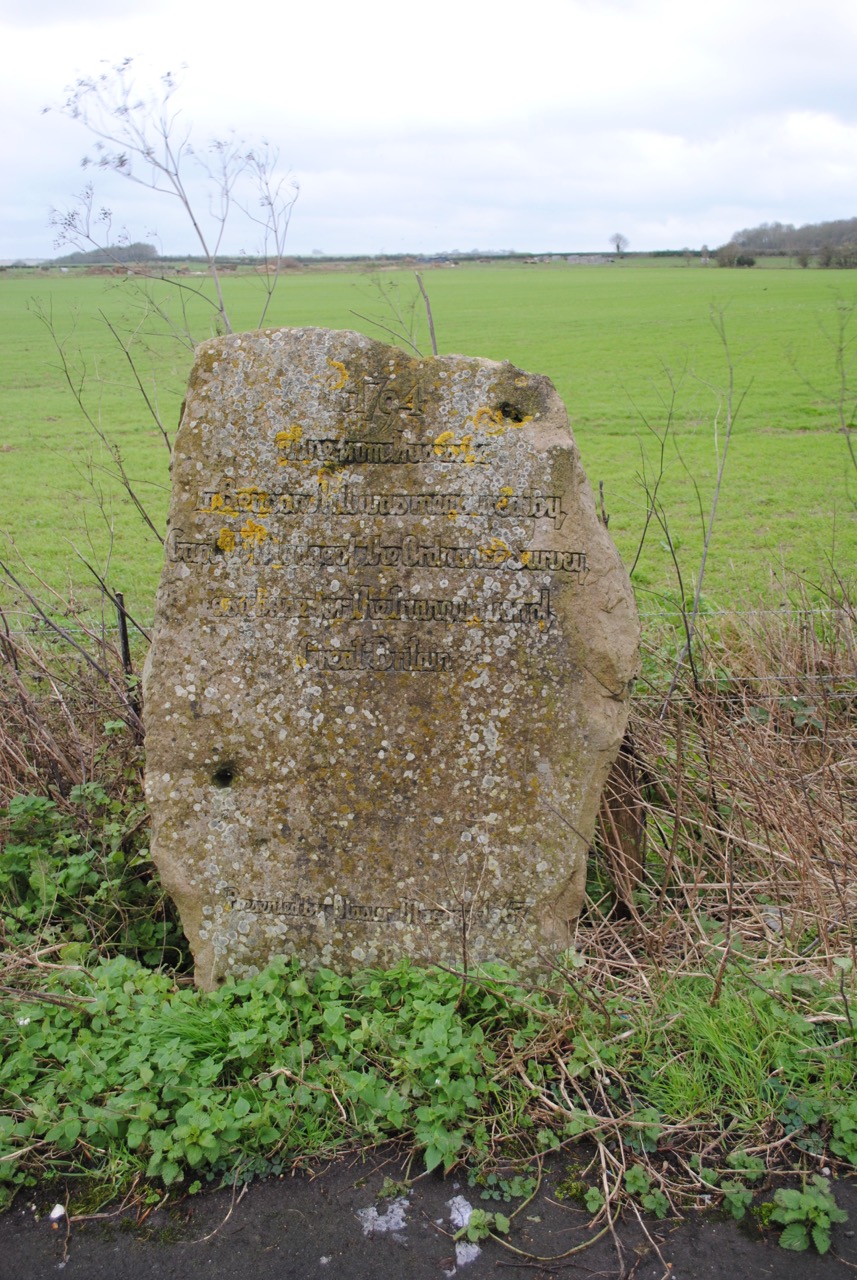 Anyone visiting the Iron Age hill fort at Old Sarum in Wiltshire is likely to miss the weathered, lichen-speckled monument opposite the entrance, on the other side of the main road into Salisbury. The inscription on this irregular block of stone is very difficult to decipher, not just because of its age but also because of its unusual (perhaps even unique — certainly, I have seen nothing in this style before) lettering. I was unable to read it myself and am indebted to the Random encounters with the unusual website for the following transcription:

In 1794 a line from this site to Beacon Hill was measured by Capt W Mudge of the Ordnance Survey as a base for the triangulation of Great Britain.

William Mudge, in fact a second lieutenant in the Royal Artillery, was no rank and file surveyor but the Ordnance Survey’s second most senior official in its early years. He had been appointed Deputy Director of the Survey on its foundation in 1791. As well as being a career solder, Mudge was a talented mathematician and got the job on the recommendation of Charles Hutton, Professor of Mathematics at the Royal Military Academy in Woolwich

The initial impetus of the Ordnance Survey was, as its name implies, military, and with fears of a French invasion rife, the focus of its first three years of existence was the mapping of the south coast of England. In 1794 Mudge and his colleagues began their survey of the west of England, starting at Salisbury Plain. The first step for an OS survey, and indeed any scientific map-making exercise in this era, was to identify suitable triangulation points (known as ‘trig’ points). As Rachel Hewitt writes in her history of the Ordnance Survey:

Triangulation was extraordinary useful because it discovered the relative distances and bearings of a series of landmarks scattered over a terrain, using sight alone. By ascertaining those lengths and angles, triangulation allowed the surveyor to calculate the longitude and latitude of the trig points, once the longitudinal and latitudinal positions of the baseline’s ends had been discovered through astronomical observations. Triangulation was a far quicker way of establishing large measurements than doing so with a chain on the ground, but it could be expensive, as it depended on instruments sophisticated enough to precisely measure the angles of sight lines that extended over tens of miles and map-makers proficient in such observations and the complex mathematical equations that came afterwards.

(Map of a Nation – Rachel Hewitt)

So Mudge’s monument at the side of the A345 commemorates a trig point from the earliest years of the Ordnance Survey. Look at the current OS Explorer map for Salisbury & Stonehenge, a descendent of those early surveys, and you will see the stone marked, in the terse language of maps, as ‘Mon’. But what of the original trig point itself, the precise spot where Mudge had placed his theodolite? Mudge and his men often marked these points, using small cairns assembled from whatever stones happened to be lying around, so that their measurements could be re-checked at a later date. This was not, however, the case at Old Sarum. Another look at the OS Explorer map reveals a more cryptic inscription close by the monument, reading ‘Gun End of Base’.

What ‘Gun End of Base’ indicates is that a cannon was buried vertically to mark the trig point, a more permanent solution than the wooden sticks used by pre-OS surveyors or the cairns that came later. According to a contemporary report by Mudge and his colleagues, quoted by Rachel Hewitt, burying a cannon in this fashion was ‘an operation of a delicate nature, and attended with some difficulty’. I have no idea how often this practice occurred, or how many buried cannon persist across our landscape (I know of other instances at Hounslow Heath and Hampton, but the Bench Mark Database cannot be searched for this category). My guess is that such an expensive and time-consuming practice would only have been used for the bases of what were then called the ‘Principal Triangles’, from which smaller distances and elevations were measured. Unlike the cannon at Hampton, which still pokes above the ground, the Old Sarum cannon seems to be invisible, hidden beneath the soil and vegetation of a farmer’s field protected by a barbed-wire fence.

So William Mudge has two monuments at Old Sarum, one almost illegible and the other hidden. He went on to become Director of the Ordnance Survey and supervised its extension into Scotland. According to the Oxford Dictionary of National Biography entry by Elizabeth Baige, ‘Mudge was one of the most important men in the history of the Ordnance Survey since he laid its scientific and organizational foundations and shaped its later development by promoting [Thomas] Colby to succeed him’. In the early 1800s William Wordsworth observed Mudge, ‘A geographic Labourer’, at work in the Lake District and recorded the sight in his poem, ‘Written with a Slate Pencil, on a Stone, on the Side of the Mountain of Black Comb’:

Stay, bold Adventurer; rest awhile thy limbs
On this commodious Seat! for much remains
Of hard ascent before thou reach the top
Of this huge Eminence,—from blackness named,
And, to far-travelled storms of sea and land,
A favourite spot of tournament and war!
But thee may no such boisterous visitants
Molest; may gentle breezes fan thy brow;
And neither cloud conceal, nor misty air
Bedim, the grand terraqueous spectacle,
From centre to circumference, unveiled!
Know, if thou grudge not to prolong thy rest,
That on the summit whither thou art bound,
A geographic Labourer pitched his tent,
With books supplied and instruments of art,
To measure height and distance; lonely task,
Week after week pursued!—To him was given
Full many a glimpse (but sparingly bestowed
On timid man) of Nature’s processes
Upon the exalted hills. He made report
That once, while there he plied his studious work
Within that canvas Dwelling, colours, lines,
And the whole surface of the out-spread map,
Became invisible: for all around
Had darkness fallen—unthreatened, unproclaimed—
As if the golden day itself had been
Extinguished in a moment; total gloom,
In which he sate alone, with unclosed eyes,
Upon the blinded mountain’s silent top!