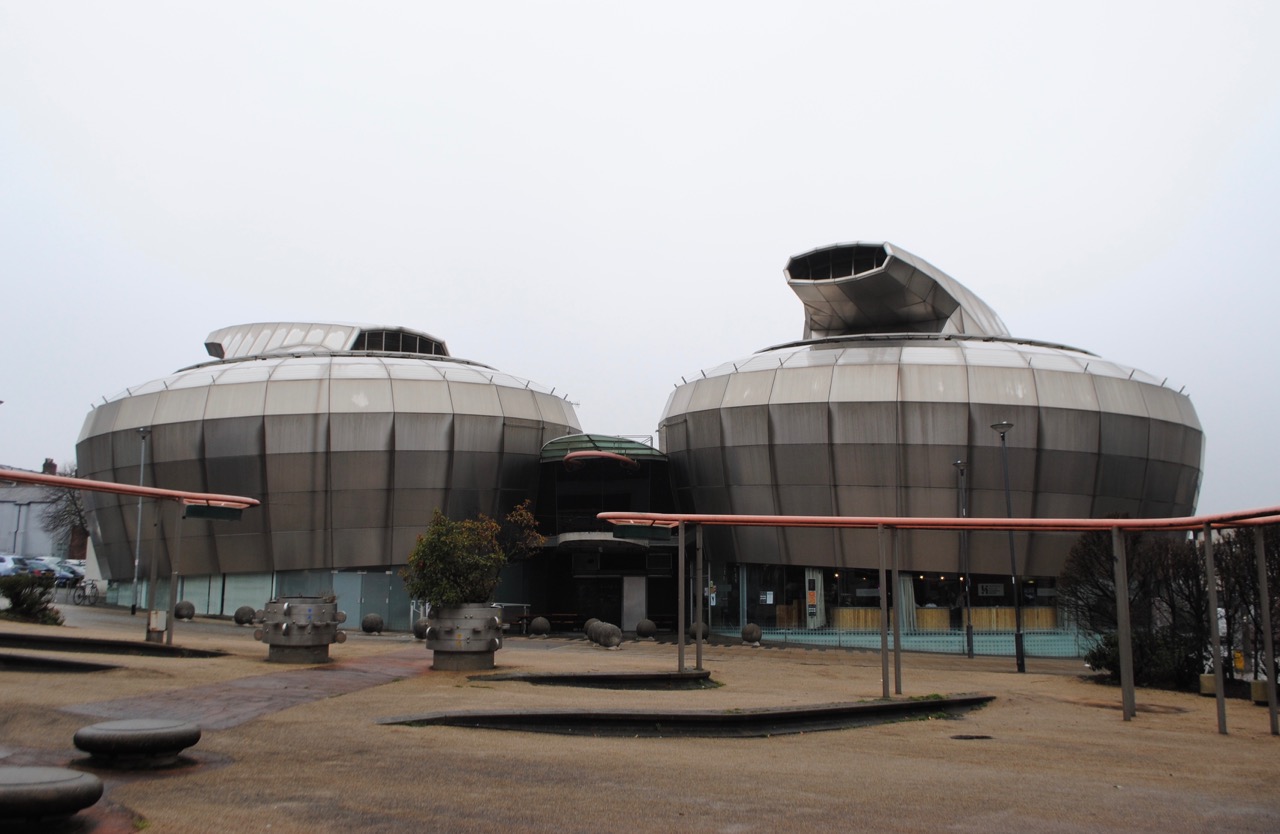 The need has gone; the memorial thereof remains.

The Bilbao Guggenheim has a lot to answer for. Its remarkable, undeniable success generated two dubious notions. The first is that what every down-on-its-luck, post-industrial city needs is an ‘iconic’ building. The second is that the quickest way to regenerate that same post-industrial city is to spend big on arts-heritage projects. Put the two together and voila! (or rather, hemen!, which is the Basque equivalent according to Google Translate.) Build it, stuff it with art, and they, the cultural tourists, will come. And in their wake, like gulls around a trawler, will come other arts-leisure-retail businesses and entrepreneurs.

Back in the mid-Nineties, Sheffield City Council was looking for an ‘iconic’ centrepiece for their ’Cultural Industries Quarter’ scheme, intended to regenerate a run-down area of central Sheffield. Tim Strickland, once the manager of the Seventies ska band The Specials, pitched the concept of a National Centre for Popular Music, drawing on the city’s sterling pop history of bands like ABC, Cabaret Voltaire, Clock DVA, the Human League, and Pulp. The Council liked the idea; it seemed a surefire bet. After all, the thing about popular music is that it’s, well, popular. It was no coincidence that this was also the time when National Lottery cash was beginning to slosh around the UK’s arts economy. It looked like free money, and the burghers of Sheffield wanted a bucket or two of it. Soon the Arts Council was on board with the proposal and the project was underway.

The National Lottery coughed up £11 million, and another £4 million was raised from other sources. RIBA oversaw the architectural competition for the obligatory ‘iconic’ building, and it was won by Branson Coates Architecture. With a nod to Sheffield’s Steel City heritage, the external design took the form of four stainless drums, capped with what looked like rocket-ship exhaust modules which were engineered to rotate in the wind, all surrounding a glazed central atrium. The completed building received favourable reviews, and optimism, particularly on the board of the Centre’s management company, Music Heritage Ltd, surged. Tim Strickland was appointed Creative Director. The business case estimated 400,000 visitors a year, which would have been very good going for a northern city like Sheffield.

The problems started almost as soon as the Centre opened in March 1999. The building might have been iconic but the exhibits weren’t. The National Centre for Popular Music (and looking back now, it’s strange they didn’t come up with a snappier name for the place) needed good stuff to go in it and interesting things for the punters to do. The high-end of the pop memorabilia market is fiercely competitive and it cost a fortune to get hold of genuinely significant items. The NCPM offering in this area was pretty thin: highlights were a pair of Richard Hawley’s guitars and some of ABC’s gold lamé jackets.

One of the four drums was devoted to a sound installation produced by Martyn Ware, formerly of Heaven 17, characterised by him as a’ sonic mural’. It sounds dire and probably sounded dire. Another of the drums hosted the ‘Making Music’ area, in which the interactivity was limited to activities such as blowing through a tube attached to a trumpet to experience the trumpet sound. This kind of dull and worthy intellectualism is the antithesis of popular music, which should be irreverent, demotic, and above all fun. The Centre doesn’t sound like fun at all. At this point I should emphasise that I never managed to visit the place while it was open. These observations may be wholly unfair and the scheme may have been an enterprise of genius. But the reality was that not many other people were visiting the NCPM either.

By the end of the first six months visitors numbers amounted to 66,000, and the Centre, with its large staff and high running costs, was in financial trouble. By November of its opening year, debts had reached £1 million. The lead architect Nigel Coates had said that the building ‘invites you off the street to jive in its funky spaces’, but there was very little jiving going on. Optimism flared up again briefly when a former marketing director of Madame Tussaud’s was recruited to run the place and salvage its finances. ‘Ringing tills are the sort of music I want to hear in the centre from now on,’ he stated boldly on taking over. Another £2 million was spent on a re-launch. The new boss lasted less than six months before jumping ship and heading back to London to run Alexandra Palace.

The NCPM closed in 2000, fifteen months after it opened. There were few lamentations. Yorkshire Forward, the regional development agency, bought the building for £800,000 in a smart bit of business and then swapped it with Sheffield Hallam University for some vacant land. The university turned it into what was probably the most expensive student union building in the world. ’Students given pop centre’, was how a Guardian headline put it. The design remains impressive enough, though the building has acquired the dishevelled look of student unions everywhere. It’s a structure be admired rather than loved. And like most ‘iconic’ buildings, it looks plonked down in the surrounding cityscape. The tops of the drums no longer rotate, presumably some mechanical fault which has not been fixed or cannot be, and an obvious visual metaphor for a project which lost its swing.

The NCPM was not the only lottery-funded white elephant, but it was emblematic. A government report in 2003 accused the Arts Council of ‘naivety’ in the way it lavished £33 million of National Lottery money on this and fourteen other projects. The line between naivety and delusion, especially about visitor numbers, can be a blurred one. Sheffield is a great city but it’s never going to be a tourist destination in the class of, say, Bath or Oxford — or, more to the point, Nashville. The vast amounts of National Lottery money suddenly available for arts projects caused many a cultural commissar to experience delusional behaviour, and few things are more pleasurable than coming up with grand schemes to spend other people’s money. (The Public gallery and venue in West Bromwich, designed by the megalomaniac architect Will Alsop, was another lottery-funded disaster; it cost £72 million, opened in 2008 and closed in 2013.) Lessons, as the bureaucrats always say, have been learned, and financial sustainability is now supposedly one of the key tests for these kinds of business cases.

Of course, it’s easy to be wise after the event but I wonder it occurred to anyone on Sheffield City Council that cultural cash could have been better invested in more bottom-up projects, like upgrading existing music venues or even, a subject dear to my heart, bringing libraries into the twenty-first century. But — Bilbao Guggenheim! But — iconic building! But — we want one! The last word must go a short description of the project on the Architonic website, written, I’d guess, by Nigel Coates, which says, with superbly sniffy understatement:

The ambitions of Music Heritage Ltd, the promoters of NCPM, were to make the first viable attraction in Britain centred on music. It would key-in to the vibrant local music industry, and give Sheffield a new landmark. They would have achieved all three had the displays been up to the standard of the building, which received considerable praise in the press.