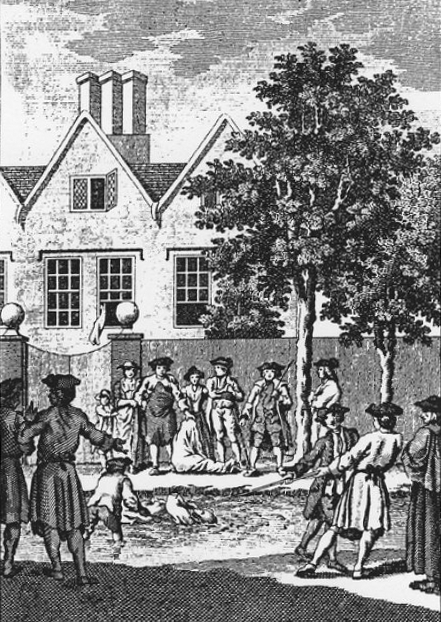 One day in 1745 in the hamlet of Gubblecote, near Tring in Hertfordshire, an elderly woman named Ruth Osborne went to beg for some buttermilk at a local farm. She lived in poverty with her husband, John, neither of them able to get much work or support from their neighbours. The Osbornes were shunned for the dual reasons that they were thought to be both witches and Jacobites (1745 also happened to be the year of Bonnie Prince Charlie’s rising). The farmer she approached that day, John Butterworth, sent her away, angrily claiming that ‘he had not enough for his hogs’, let alone for the likes of her. Osborne shot back at him that ‘the pretender would have him and his hogs too’.

A few months later some of Butterworth’s calves died, a disaster which he blamed on Ruth Osborne’s witchcraft. By 1751 Butterworth’s farm had failed and he was running the Black Horse alehouse in Gubblecote. He was also suffering regular epileptic fits and these too he attributed to Osborne’s sorcery. Thomas Colley, a chimney sweep and regular at the Black Horse, suggested that Butterworth consult a cunning-woman to get to the truth of the matter. A suitable Northamptonshire woman was invited to Gubblecote to advise Butterworth. Without naming the Osbornes, she identified ‘two of his neighbours, a man and a woman’ as the source of his bewitchment. This verdict was sufficient confirmation for Butterworth and led Colley to agitate for the Osbornes to be tried by means of witch-swimming.

Farmland at Gubblecote: somewhere near here was John Butterworth’s farm and Marston-Meer.

Britain in the eighteenth century maintained a kind of collective cognitive dissonance about witchcraft. On the one hand, the Witchcraft Act of 1736 repealed both English and Scottish statutes against witchcraft (the Irish statute lingered on until 1821). The Act stated:

No Prosecution, Suit or Proceeding, shall be commenced or carried on against any Person or Persons for Witchcraft, Sorcery, Inchantment or Conjuration or for charging another with such an offence, in any Court whatsoever in Great Britain.

The Act also made it an offence to ‘pretend’ to practice witchcraft. In line with almost every wealthy, powerful European state of the time, Britain was seeking to demonstrate its transition from Medieval superstition to Enlightenment rationalism. On the other hand, belief in the existence of witchcraft and its real effects continued in all classes of society, from eminent figures like Samuel Johnson the author and William Blackstone the jurist, to the common country folk in settlements like Gubblecote, who reflexively sought supernatural explanations for their regular misfortunes. And especially among those common folk, the ‘enlightened’ state’s apparent indifference to the matter of witchcraft, which they saw operating in their daily lives, was baffling, frustrating and occasionally infuriating.

So it was that, against the law of the land, the Osbornes were brought to trial by popular demand. There was nothing surreptitious about it either. Town criers in the nearby towns of Winslow, Leighton Buzzard, and Hemel Hempstead spread the news that ’on Monday next [22 April 1751] a man and a woman are to be publicly ducked at Tring, in this county, for their wicked crimes’. For the reality was that despite the repeal of the witchcraft statutes, popular trials of this kind were either tolerated or ignored by the authorities. In most cases there was little that magistrates could or would do in the face of popular justice, short of calling in the army, a measure reserved for more extreme circumstances than the persecution of an unfortunate couple like the Osbornes. The unofficial policy for these occasional outbreaks of violence was to let the mob have their way for fear of provoking something worse.

The church of St Peter and St Paul at Tring, where the Osbornes tried to hide.

In the case of the Osbornes, one person in authority did intervene. Matthew Barton, Tring’s overseer of the poor, who knew the couple, lodged them in the town’s workhouse for protection. But this did nothing to stop the trouble that was brewing and the Osborne’s location was impossible to keep secret. The workhouse master Jonathan Tomkins, ‘believing both the man and his wife to be very honest people’, took the Osbornes to the vestry of the church of St Peter and St Paul in Tring, presumably hoping that some lingering folk memory of the concept of sanctuary might save them from harm. It did not. The appointed day of 22 April came, and a mob, some five thousand strong, advanced on the workhouse. Having broken into the building, ransacked it (‘they were so infatuated, that they searched the very salt-box for them’), and found no sign of the Osbornes, they threatened to burn it to the ground unless the couple were handed over.

Tomkins reluctantly gave in. The illusion of sanctuary was dispelled and the Osbornes were marched from the church in Tring back to Gubblecote. It’s a distance of about three miles, and the route today is as it was then: down Tring’s High Street, along what are now Brook Street and Wingrave Road, past farmland and cottages, until Gubblecote is reached. It must have been terrifying for the couple, that passage back to the hamlet, knowing what was to come. They were held at the Black Horse, while Colley and the mob considered where the witch-swimming was to take place. Later that afternoon they were taken to a pond, Marston-Meer, between Gubblecote and the next village, Long Marston.

Here, under Thomas Colley’s supervision, the couple were partially stripped and had their thumbs tied to their toes, cross-wise, as was the protocol. They were wrapped in sheets and each was tied with a rope before being dragged through the pond. The procedure of witch-swimming was simple: if the suspect floated they were a witch; if they sank and drowned, then there was the cold comfort of knowing that they were innocent. The Osbornes floated, despite being dragged through the water several times while Colley pushed them under the water with a stick. But having ‘been suffocated with Water and Mud’, Ruth was unconscious by the time she was pulled back to the bank. She was brought to the Half Moon pub in another nearby village, Wilstone, where she was laid out on a bed by the landlord. Meanwhile outside the pub Colley was collecting money from the mob ‘for the enjoyment the ducking had provided’. John Osborne ‘being a lusty strong man, survived the inhuman treatment of these barbarous miscreants’, but Ruth died shortly after being brought to the Half Moon. She is the last known person to be killed in England by witch-swimming, though not the last to be tried in this way.

The Half Moon pub at Wilstone, where Ruth Osborne died.

In the days and weeks afterwards, the news of the events at Tring and Gubbelcote gradually spread through the country, eventually making the London newspapers. The enlightened part of society felt obliged to act. Thomas Colley was one of a small number of the mob to be arrested, drawing most of the law’s attention as the ringleader and as the man who had collected money from the crowd afterwards. He was tried for murder at Hertford assizes on 30 July 1751. Despite claiming that he had gone to the pond to save Ruth Osborne, there were enough witnesses to testify to the contrary. Colley was found guilty and condemned to hang. The sentence was carried out on 24 August 1751 at Gubblecote Cross, the crossroads of the hamlet. And belatedly, the authorities made a show of force. Colley and the hangman were ‘escorted by 108 men belonging to the regiment of horse blue, with their officers, and two trumpets; and the procession was slow, solemn, and moving’.

Colley had made a signed declaration while in Hertford Gaol and this was read out before the execution. It is unclear how much of this was sincere and how much had been dictated by the priest in attendance, but no doubt Colley was by this time regretting his actions:

Good people:
I beseech you all to take warning by an unhappy man’s suffering; that you be not deluded into so absurd and wicked a conceit, as to believe that there are any such beings upon earth as witches.
It was that foolish and vain imagination, heightened and inflamed by the strength of liquor, which prompted me to be instrumental (with others as mad brained as myself) in the horrid and barbarous murder of Ruth Osborne, the supposed witch, for which I am now deservedly to suffer death.
I am fully convinced of my former error, and with the sincerity of a dying man, declare that I do not believe there is such a thing in being as a witch; and pray God that none of you, thro’ a contrary persuasion, may hereafter be induced to think, that you have a right in any shape to persecute, much less endanger the life of a fellow creature.
I beg of you all to pray to God to forgive me, and to wash clean my polluted soul in the blood of Jesus Christ, my Saviour and Redeemer.
So exhorteth you all, the dying Thomas Colley.

Despite this, the sympathies of the local population still seem to have been very much with Colley and against the Osbornes. According to one witness:

The infatuation of most of the people in that part of the county was such, that they would not be seen near the place of execution, insisting that it was a hard case to hang a man for destroying an old woman that had done so much damage by her witchcraft. It was said, he was to have been executed a week sooner, but when the proper officers came to convey him from the goal, a prodigious mob assembled and would not suffer him to be taken out of prison.

Gubblecote Cross, where Thomas Colley was hanged and gibbeted. The house behind the trees is from the 16C and so was standing at the time of the execution.

Colley was not only executed at Gubblecote Cross but his corpse was gibbeted (hung in chains) there for months afterwards. There is almost inevitably a ghost story associated with him, and it was said that a large black dog came to haunt the lanes around Gubbecote. Nothing, though, was ever heard of again from Ruth Osborne.

PS Most of the factual information in this post is gleaned from the Oxford Dictionary of National Biography entry on Ruth Osborne and an article from the 1751 Monthly Chronologer, which is reprinted on the Tring Local History Museum website, and from which the illustration at the top of this post, of the Osbornes’ ducking, is taken.