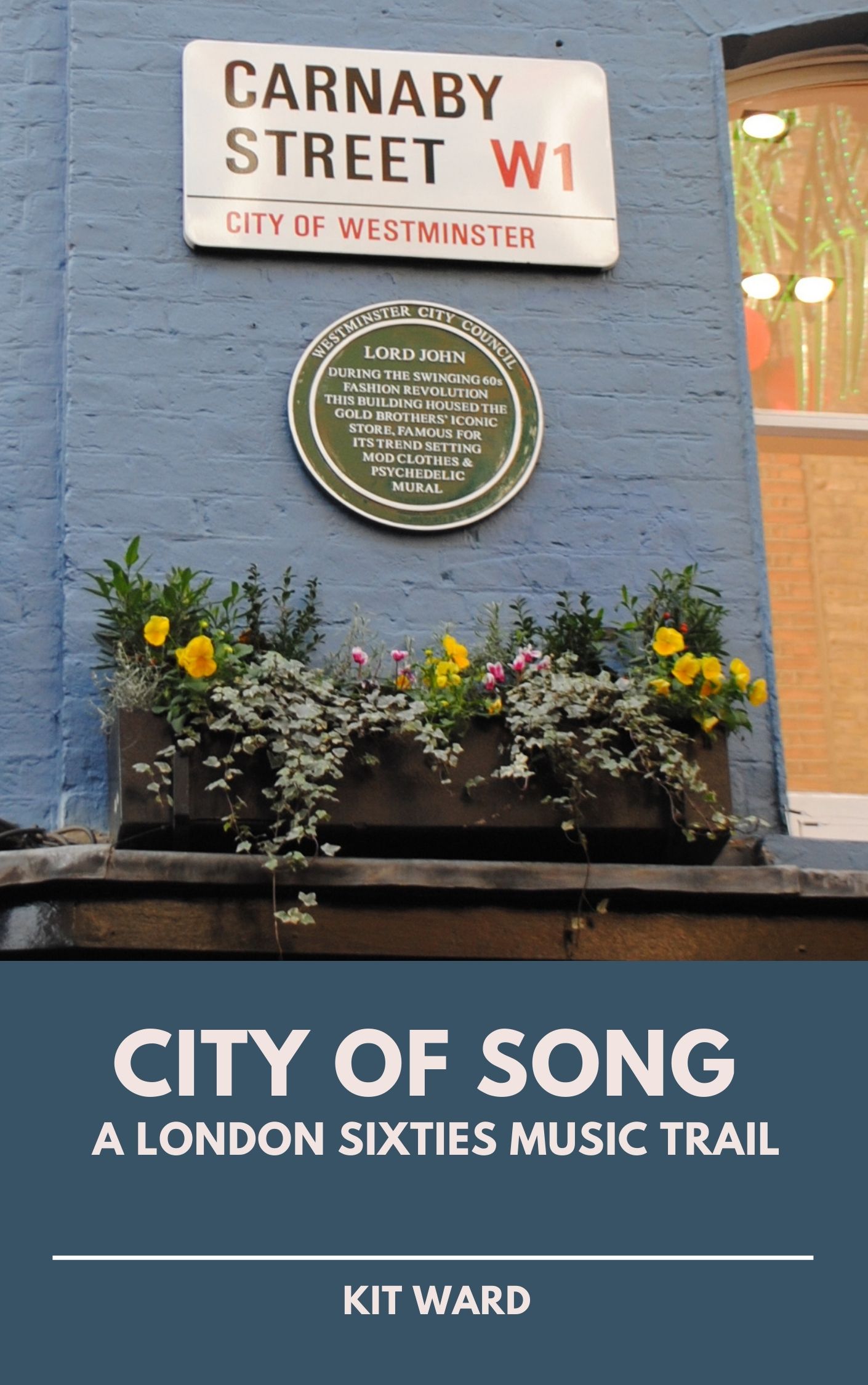 My new book, the second in the London Trails series, is out now. City of Song: A London Sixties Music Trail takes the reader on a walk from Chelsea to Soho, stopping off at twenty-four locations that hosted significant musical performances, encounters and happenings in that decade. You can learn where the Rolling Stones recorded their first (and unsuccessful) demo record, where David Bailey taught the Twist to Rudolf Nureyev, and where Beatles performed their last live show. Each stop has its own Spotify playlist, comprising tracks that are linked with or apposite to each place (with a few random ones thrown in). City of Song: A London Sixties Music Trail is available on the Amazon, Apple Books and Kobo stores; for more information, click here. You  can also preview the route on Google Maps (and the on-line directions can be used while reading the book/walking the trail). As a sampler, here’s the entry for UFO, the first of London’s psychedelic clubs:

London’s psychedelic club scene was inaugurated by UFO, opened in December 1966 by John ‘Hoppy’ Hopkins, co-founder of the underground newspaper International Times, and the record producer Joe Boyd. Originally billed as ‘UFO-Night Tripper’, the club ran every Friday night in the Blarney Club, an Irish dancehall in the basement of the Gala Berkeley Cinema. The opening night was a double bill of Pink Floyd and the Soft Machine, both of whom became the UFO house bands. The two groups attracted very different audiences, as one Soft Machine fan remembered: ‘Floyd were very trippy, very druggy, but very white rock. They were for people who liked Tolkien and went looking for UFOs on Hampstead Heath. The Soft Machine were more avant-garde in a European sense. They fitted the bill at jazz festivals in France. Their audience seemed more socially conscious—into black civil rights and the working-class revolution.’
’Nowadays , UFO would make a 1970s disco look sophisticated’, recalled Mick Farren a journalist on IT and a singer with the band, the Social Deviants, ‘But at the time, the ambience was mind-blowing.’ Spectacle was as important as music at UFO. Among the regular performers were the Exploding Galaxy dance group and Stone Monkey mime troupe. The artists Mark Boyle and Joan Hills were responsible for the LSD-enhancing light shows and a German dealer named Marlon took care of dispensing the LSD itself. Psychedelic poster art, that staple of the late Sixties, made its London debut with posters and flyers for the club designed by the partnership Hapshash and the Coloured Coat (in reality, Michael English and Nigel Waymouth, the latter a co-owner of Granny Takes a Trip, whom we met at Stop 3).
Along with psychedelia came a new phase of the counterculture. It was the end of Swinging London and the beginning of something more intellectual and consciously revolutionary. With it too came the underground press. Newspapers and magazines like the International Times, Oz and Black Dwarf were launched to provide a platform for new political and social ideas. Apart from the obvious rallying calls of drug legalisation and a more liberal attitude to sex, these publications were certain about what they were against: the Vietnam War, the capitalist system, and the repressed and repressive ruling classes.
Pete Townshend of the Who was a regular UFO attendee and tripper. One night Joe Boyd saw him crouched by the stage, pointing at Roger Waters, Pink Floyd’s bass player, claiming Waters was ‘going to swallow him’. Townshend said later that he was afraid Waters was going to steal his girlfriend, Karen Astley, who was a centre of attraction at UFO for dancing in what Townshend described as ‘a dress that looked like it had been made out of a cake wrapper’.
Other bands that appeared at UFO included Fairport Convention (also managed by Joe Boyd), Procol Harum and the Incredible String Band. Police scrutiny of the club was intense and drugs busts were frequent, especially when, as happened often, trippers wandered out onto Tottenham Court Road in the early hours of the morning. Things came to a head in the summer of 1967. Hopkins was jailed for a cannabis offence, having been having been branded a ‘menace to society’ by the judge. The ‘Free Hoppy’ graffiti that popped up all over London had no effect. Then the News of The World newspaper published an exposé dubbing the club ‘a hippy vice den’. Having been warned by the police that his licence would be revoked if UFO continued, the landlord told Boyd the club had to move out.
Brian Epstein, manager of the Beatles, offered them the Champagne Lounge at his recently-acquired Saville Theatre but Boyd and Hopkins wanted a bigger venue. The club moved to the Roundhouse at Chalk Farm but did not make enough money and closed for good in October 1967. The block that housed the Blarney Club was demolished in the Seventies.