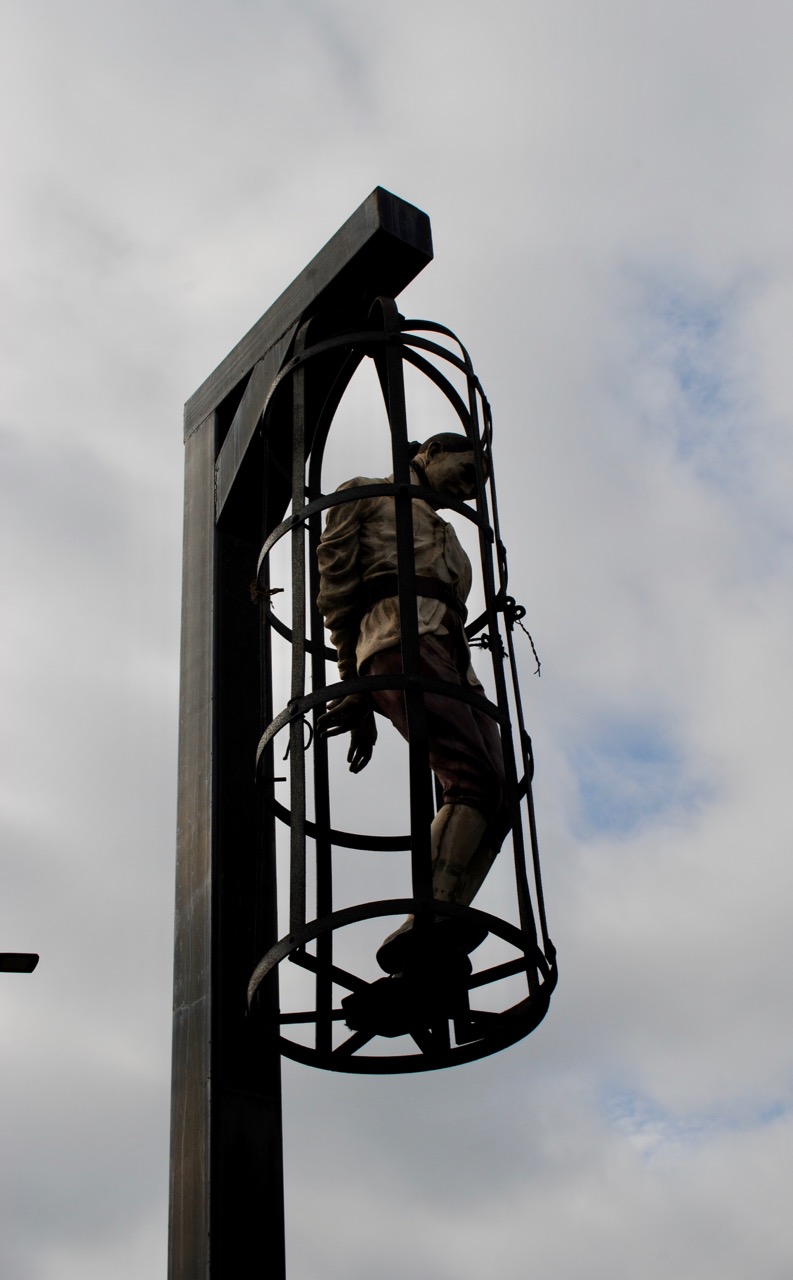 The gaffer sits by a lantern with his tools:
hammer; rivets; hood; a pot of tar.
He anoints the face with a thick brush,
stroking against stubble, sealing mouth

and nostrils. It’s like caulking a boat
he says. He dips the brush in,
sweeps down the eyelids. A further
thick layer all over and he’s done.

They lift him again and put him in the iron,
snapping a finger and flaying some skin
from the thumb. Finally he’s in,
the rivets hammered home.

To be thrice-memorialised on a single stretch of road might seem extravagant for a monarch, let alone an obscure and hapless highwayman. But though one of these remembrances of Spence Broughton is a kitsch and somewhat macabre reproduction of the after-life of his corpse, the other two would register briefly or not at all on the consciousness of the passer-by. To begin with, there is the road itself, Broughton Lane, in the Lower Don Valley district of Sheffield. How could the wretched Spence ever have conceived, in his brief captivity and even briefer time on the gallows, that there would be a road named after him a century and more later? Back in the 1700s, this area was part of Attercliffe Common, a sparsely populated stretch of open land between the small towns of Sheffield and Rotherham. With the industrialisation of the nineteenth century steel works colonised the Lower Don Valley and Sheffield became the largest steel production centre in the world. Only later in the twentieth century were the steel works replaced by the staple post-industrial mix of shopping centres, leisure complexes, sports facilities and fast food franchises. This changing landscape was not only the scene of Broughton’s crime but of his body’s after-life.

Spence Broughton, born in Lincolnshire in 1746 into a line of farmers, had abandoned his wife and family for a life of gambling and dissolution by the time he was in his forties. Short of money, and in league with his friend John Oxley, he cooked up a scheme to rob the Sheffield-to-Rotherham mail cart. In February 1791, they put the plan into action. Stopping the cart on Attercliffe Common, they tied up and blindfolded the postman, and made off with the mail bag. What a disappointment it must have been to find there was nothing of value in it other than a French bill of exchange. Though this was worth the not-too shabby sum of £125, the only place to flog such an item was London. Once in the capital, Broughton and Oxley did manage to cash the bill, but not without raising suspicions about how it came into their possession. One account claims that they used a French dictionary during the transaction, which must have been quite comical. The duo parted company at this point, but when Oxley was arrested a few months later for a hold-up in Cambridge he was charged with the Sheffield job. Disproving the maxim of honour among thieves, he implicated Broughton too, presumably to share whatever retribution was coming.

The cunning Oxley managed to escape from Clerkenwell Prison before the trial but Newgate Prison was able to hold Broughton, and in March 1792 he was taken to the York assizes. Robbing the mail was an indubitably serious offence at the time. Broughton’s trial was swift and the punishment brutal. He was sentenced to death by hanging but, in the words of the presiding judge, ’in order to deter others, his punishment shall not cease at the place of execution but his body shall be suspended between earth and Heaven, as unworthy of either and to be buffeted by winds and storms’. His body, post-execution, was to be taken back to the scene of the crime and hung in a gibbet.

Gibbeting was a punishment reserved for those criminals whom the authorities wished to make an example of. So it was that the fully clothed body of Spence Broughton was suspended in an iron cage and strapped upright with leather bonds, on Attercliffe Common. The gibbet was close by a pub called the Arrow, resulting in bumper trade for the landlord. These kind of spectacles were hugely popular in Georgian England, and people began to gather on the common even before Broughton’s corpse had arrived. On the first day of his post-execution appearance an estimated 40,000 were drawn there to gawp. If the occasion was at first festive, as time passed sympathy for Broughton and his fate increased, and he achieved something of the status of a local folk hero.

Broughton’s slowly decomposing body became a local landmark and as pieces fell from him, they were treated with the veneration usually reserved for saintly relics. Two fingers that came loose were apparently cast in a pottery tankard that was prominently displayed in the Arrow. But all spectacles must eventually come to an end, and in 1827 the gibbet and what remained of Broughton were taken down because the new landowner was getting fed up with the constant stream of visitors on his land. According to a plaque on Broughton Lane (fixed to the wall, improbably, of a Taco Bell/Costa Coffee outlet) Broughton turned out to be the last man in England to be gibbeted.

I mentioned three memorials on Broughton Lane in the opening paragraph. A road name and a blue plaque: so far, so normal. But at some point in the recent past, the owners of the Noose  & Gibbet Inn on Broughton Lane turned up the dial on Spence Broughton commemoration by installing an effigy of a man in a gibbet outside the pub. I wonder what visitors to the Sheffield Arena make of it. No doubt, if such an effigy was on display outside a pub in a soft Southern city it would have been taken down by now. But I like the unashamed vulgarity of the thing: it’s a genuine nod to eighteenth-century popular taste. Oh, and as for John Oxley, his escape was in vain. He was found, dead from hunger and cold, in a barn on Loxley Moor near Sheffield, in January 1793.

The poem excerpt above is from Rob Hindle’s collection The Purging of Spence Broughton, a Highwayman, available from Longbarrow Press.

Broughton’s fate also inspired some contemporary ballads, including this one on the Yorkshire Garland Group folk song website performed by Robin Garside.