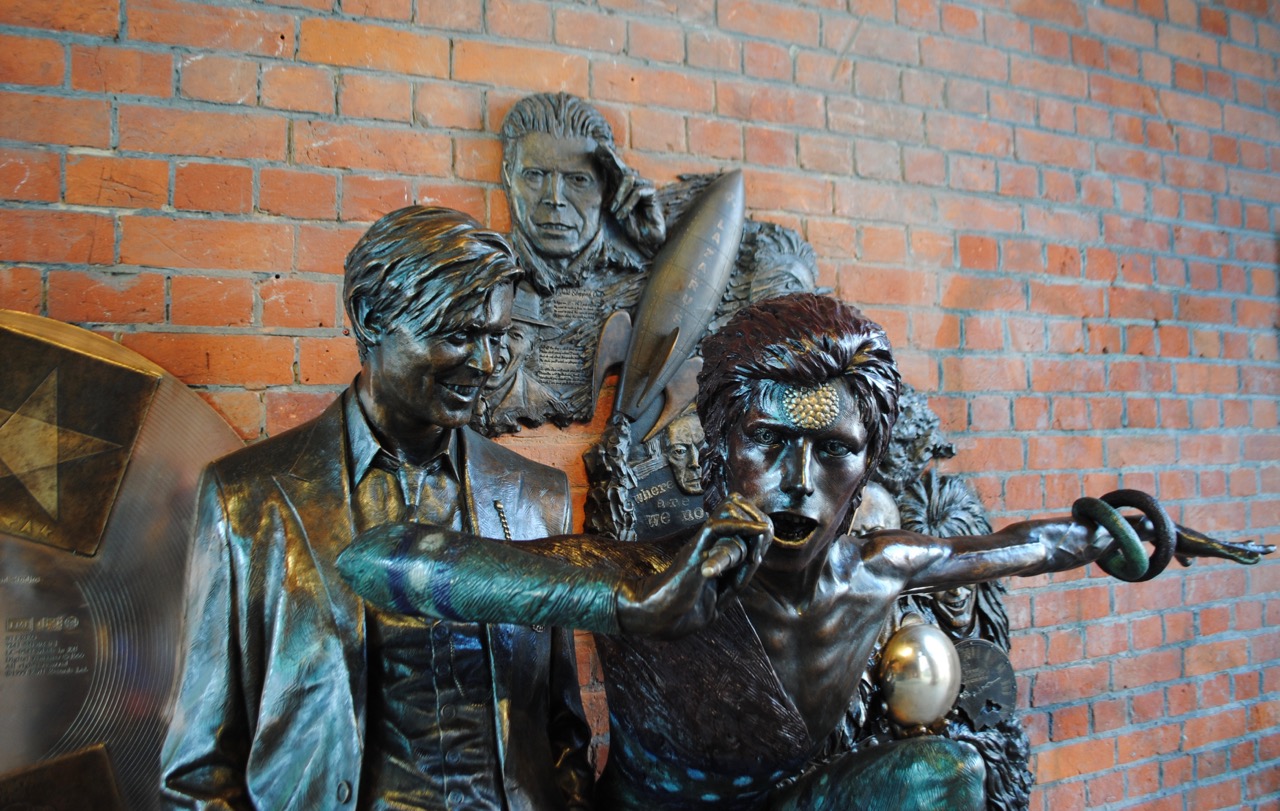 He came back to play Friars with the proper Ziggy look in January 1972. He had completely altered his persona, and having told so many people that the new stage show was going to be outrageous, the place was buzzing. Everyone was so excited. I was backstage before the gig and remember Mick Ronson being very unhappy that he was being asked to wear his gold jumpsuit.

If there was going to be a memorial statue for David Bowie then Aylesbury might seem an odd, out-of-the-way place for it. Why not Brixton, where he was born, or Bromley, where he was formed, or Soho, where he was transformed? The connection goes back to the early 1970s when, despite its traditional market-town identity, Aylesbury had a thriving music scene. At the centre of this scene was a movable feast of a club called Friar’s Aylesbury, which occupied successively three different venues, from 1969 to 1984, and was revived in 2010, when the town’s new Waterside Theatre opened. David Stopps was the founding father of Friar’s Aylesbury and continues to be its presiding spirit. It was Stopps who hatched the scheme for the Bowie statue.

Bowie’s connection with Aylesbury was not a sustained one but is significant for one reason: it was at a Friar’s Aylesbury gig at the Borough Assembly Hall that he first tried out the Ziggy Stardust persona and the songs from that eponymous album. You could say that that chilly night in January 1972 was when the Seventies, as a cultural decade, really began. The impact of Ziggy, and of the early 70s Bowie, was immense, though my regard for his art was really confirmed later in that decade, when he produced that astonishing quartet of albums – Young Americans, Station to Station, Low and “Heroes” – that I still treasure and still regard as his peak. After the early Eighties flourish of Let’s Dance, I became detached from Bowie and from pop music in general. Nothing new seemed as good as the stuff I spent my youth listening to. That may be a wholly subjective view, but is there anyone who doesn’t really think that the Seventies was Bowie’s greatest decade?

I continued to admire him as an artist and a person: he kept going, kept writing, kept performing, and I like people who keep going. The commonplace notion of Bowie as a chameleon, an adopter of different personas, is overplayed, I think. Of course, there was Ziggy, the alien pop star who went off the rails, but the rest were little more than make-up and costume changes. Looking back now, Bowie seems much more in the tradition of smart, professional, idiosyncratic performers like Anthony Newley, one of his acknowledged influences and to my mind a most underrated figure in British pop culture. What Bowie was so good at was taking different musical influences and transmuting them into something new and different: more alchemist than chameleon.

There was a sizeable crowd for the unveiling of the statue, titled Earthly Messenger, a few Sundays ago, almost all men and women of a certain age. For anyone under the age of forty passing through Aylesbury’s Market Square it was an inconvenience, more irritation than event. ‘I can’t get through because of this bloody statue’ I heard one young woman complain into her mobile phone, one child in pushchair and another in hand. (‘Pushing through the market square/ So many mothers sighing’ are the opening lines to ‘Five Years’, the first track on the Ziggy Stardust album, the market square of the song supposedly Aylesbury’s).

As for Earthly Messenger itself, at first sight it made me think of the Peter Pan statue in Kensington Gardens. I can’t put my finger on why, but perhaps there is something about both of them that is visually engaging but also teeters on the brink of tweeness without quite tipping into it. It is the work of Andrew Sinclair, according to whose website: ‘The world’s first David Bowie tribute sculpture tells the story of Bowie’s life and features two life-size figures, as Ziggy Stardust and a more mature standing figure of Bowie, with a background bas-relief depicting 13 portraits of his many personas throughout his career – it is a ground breaking example of Contemporary Realist sculpture’. (There’s that word ‘personas’ again.)

Sinclair modelled the figures in clay before they were cast in bronze and apparently used the mask taken from Bowie’s face during the filming of The Man Who Fell to Earth to ensure the likenesses. Sinclair’s creation is arresting and complex, but something has been lost in the translation from life-mask to sculpted clay and then to cast bronze. If at first sight I thought of Peter Pan, at second I thought of the footballer statues that are proliferating outside stadiums. Take, for example, the statues of Tony Adams, Dennis Bergkamp, and Thierry Henry outside Arsenal’s Emirates stadium. I doubt anyone would recognise who these are meant be without being told. Is it something about the technique which make them look like so lifeless, so lacking in verisimilitude? I don’t know, but the subject has been embalmed rather than brought to some kind of life, a freeze-dried cartoon of a half-remembered movie still. And it is not the austere other-worldliness of Thomas Jerome Newton that comes to mind but the camp other-worldliness of the Goblin King in Labyrinth. I can’t help feeling that Bowie deserved something nobler, something marmoreal – but where are you going find a skilled carver of marble these days?

In any case, what is the purpose of memorials like this in the twenty-first century, when the performer and their work are preserved on-line? Earthly Messenger is a striking and heartfelt tribute, but for Bowie, as for so many others, if you seek his monument look on YouTube. The afterlife of cultural figures is digital now. The Bowie statue’s main function is that of a tourist attraction. It is perfectly sized and sited to serve as a selfie backdrop. The borough council has been smart enough to realise that one way to attract visitors to your town is to provide desirable selfie opportunities.

If there is a future for memorial statuary then it may be in the form of embodied, animated artificial intelligences. It’s conceivable that a Bowie android could roam the streets of Aylesbury, programmed with the biography, the song catalogue, and as much of Bowie’s mind as can be reconstructed, posing for tourist selfies, signing autographs, cranking out a few verses of ‘Starman’ on a 12-string. There could even be multiple Bowies: behind the bar in pubs (‘We’ve got five beers, that’s all we’ve got’), on the till at Sainsbury’s (‘Here’s your ch-ch-chnage’), or in the hairdressers (‘Hey babe, your hair’s alright, but have you thought about…’). Would these Bowie AIs also inherit their original’s creative impulse? And if they all started composing their own songs then what in the world would we do?

PS For those with an interest in Bowie, I wrote a post a couple of years back about his first gig: Bowie’s first stand.