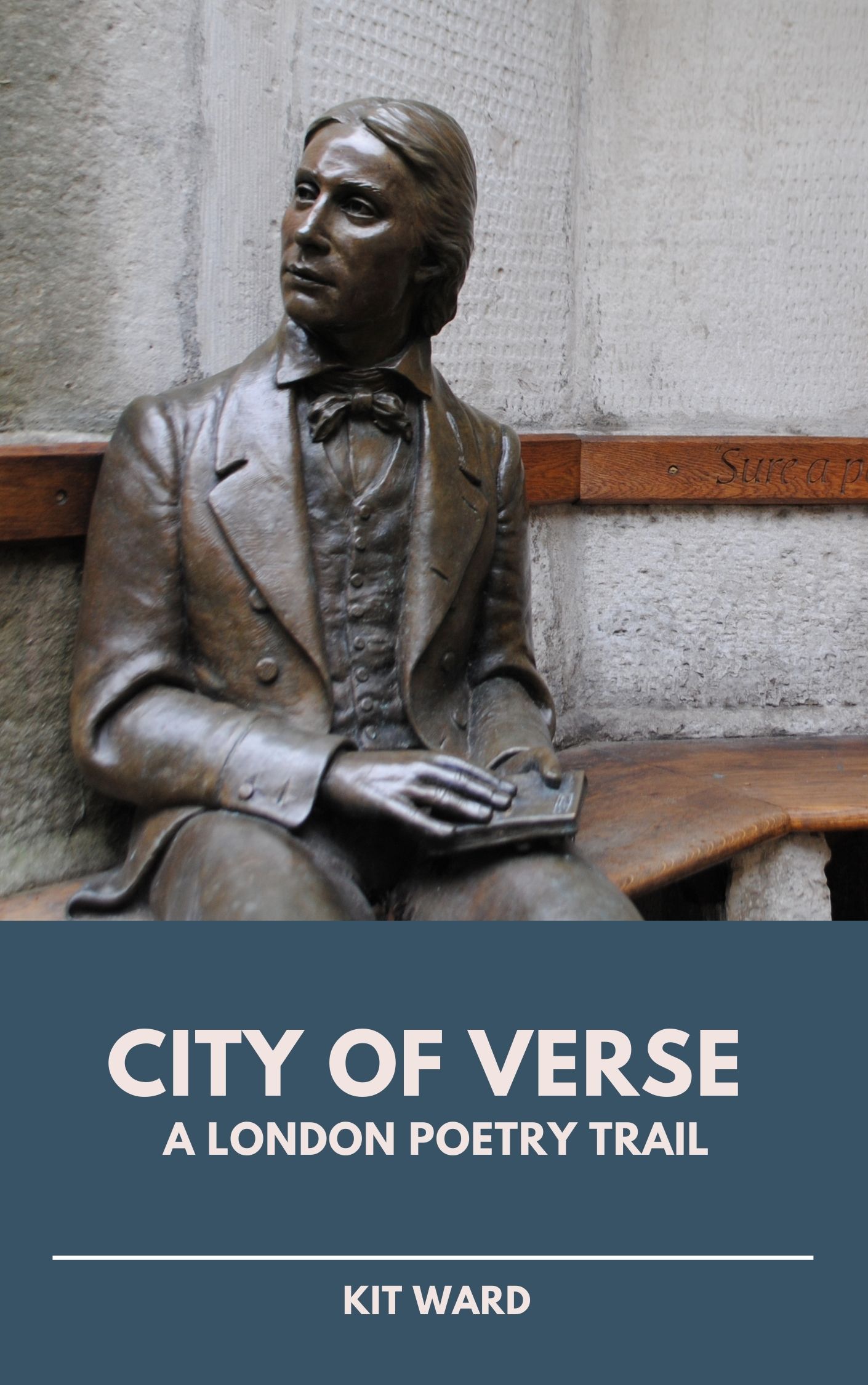 My book, City of Verse: A London Poetry Trail, is now available on the Amazon, iBooks and  Kobo stores:

Love exploring London? Love poetry? Then City of Verse: A London Poetry Trail is for you. Discover a new angle on the capital while spending time with some of its greatest writers. This guided walk through central London will take you to twenty-four sites associated with notable poets and poems. Explore the city’s literary past while visiting some of its most interesting places, from the famous to the lesser known. The trail begins at Shakespeare’s Globe in Southwark and ends at the former site of Gatehouse Prison by Westminster Abbey. Your companions on the journey include William Shakespeare, John Keats, and TE Hulme, along with twenty-one other poets, each with their unique take on the life of the city. Experience London in a new and distinctive way, and go exploring with City of Verse: A London Poetry Trail as your guide.

Features
Twenty-four poems selected from six hundred years of literature
Introductory notes on each place, poet and poem
Full route directions, with GPS coordinates for each stop
Google Maps route map and directions available on-line and for download to your smartphone

You can preview the route on Google Maps and here is a sampler, the entry on TE Hulme:

TE Hulme on the Embankment

Retrace your steps back along Victoria Embankment, passing Embankment Pier, and then continue straight ahead, under two bridges, until you reach the building site for the Thames Tideway Tunnel, aka the ‘Super-Sewer’ (the works are due to complete in 2023), where you will need to take a quick detour at the traffic lights back to the other side of Victoria Embankment. Once you have passed the site, cross back to the riverside. Continue straight ahead for 150 metres, passing the Tattershall Castle floating pub, and then pause by the Royal Air Force Memorial, with its golden eagle.

The history of London is in part a history of containing and controlling the River Thames. Westminster was once an island, known as Thorney Island due to the thorn bushes that grew there, amid the marshes and rivulets of the river’s north side. Before the construction of the Victoria Embankment the waters of the Thames lapped where Whitehall Gardens stand today. Christopher Wren had proposed a scheme for an embankment on this stretch of the river after the Great Fire but it was never realised. It was Sir Jospeh Bazalgette, one of the great Victorian civil engineers, who designed and oversaw the construction of Victoria Embankment (and similar ones at Chelsea and Lambeth). Thirty-seven acres were reclaimed from the river and a wall capable of dealing with high tides was built. The new embankment, running from Blackfriars to Westminster, was named for Queen Victoria and opened in 1870. The iron lamp posts and benches with their resting camels contribute to one of central London’s best riverside walkways (if you can block out the noise of the road traffic) and there are plenty of places for the fallen gentleman of our next poem to rest his weary bones.

Our second stop on the Embankment takes us from the imagined heat and dust of Egypt to the reality of a cold night by the Thames. TE Hulme had a short and brilliant life, and of all the neglected poets we have met on this walk, is perhaps the one who has most to say to our age. Thomas Ernest Hulme was born at Gratton in Staffordshire in 1883, He attended Cambridge University but was sent down (expelled) for idleness and pranking. Hulme referred to himself as a ‘philosophic amateur’ and began keeping notebooks of his ideas on epistemology, language and literature. Initially a disciple of the philosopher Henri Bergson, Hulme ended up rejecting Bergson’s ideas as being infected with the progressivism he deplored, identifying himself as a classicist and a Tory. He was readmitted to Cambridge in 1912 but soon afterwards fled to Germany to escape prosecution after he was discovered writing letters to the underage daughter of a don. Just six of Hulme’s poems were published in his lifetime and little of his prose work. In 1914 he enlisted as a private in the British Army and was killed in action at Flanders in 1917. Despite his short life and small output Hulme was a significant influence on several contemporaries, including TS Eliot, who viewed him as ‘the forerunner of a new attitude of mind, which should be the twentieth-century mind, if the twentieth century is to have a mind of its own’.

Hulme’s poem, ‘the Embankment’ is a beautiful miniature, its seven lines reaching from the pavement to the stars. While some poems take time to fall in love with, who could not be instantly smitten with ‘The Embankment’? Hulme’s skill is apparent in the economy and compressed imagery of the verse: not a word is wasted. Through this single scene of a ‘fallen gentlemen’ by the Thames the reader enters a world of music, poetry, ecstasy and transcendent yearning. As TS Eliot said, ‘This is a complete poem’.

(The fantasia of a fallen gentleman on a cold, bitter night)

Once, in finesse of fiddles found I ecstasy,
In the flash of gold heels on the hard pavement.
Now see I
That warmth’s the very stuff of poesy.
Oh, God, make small
The old star-eaten blanket of the sky,
That I may fold it round me and in comfort lie.