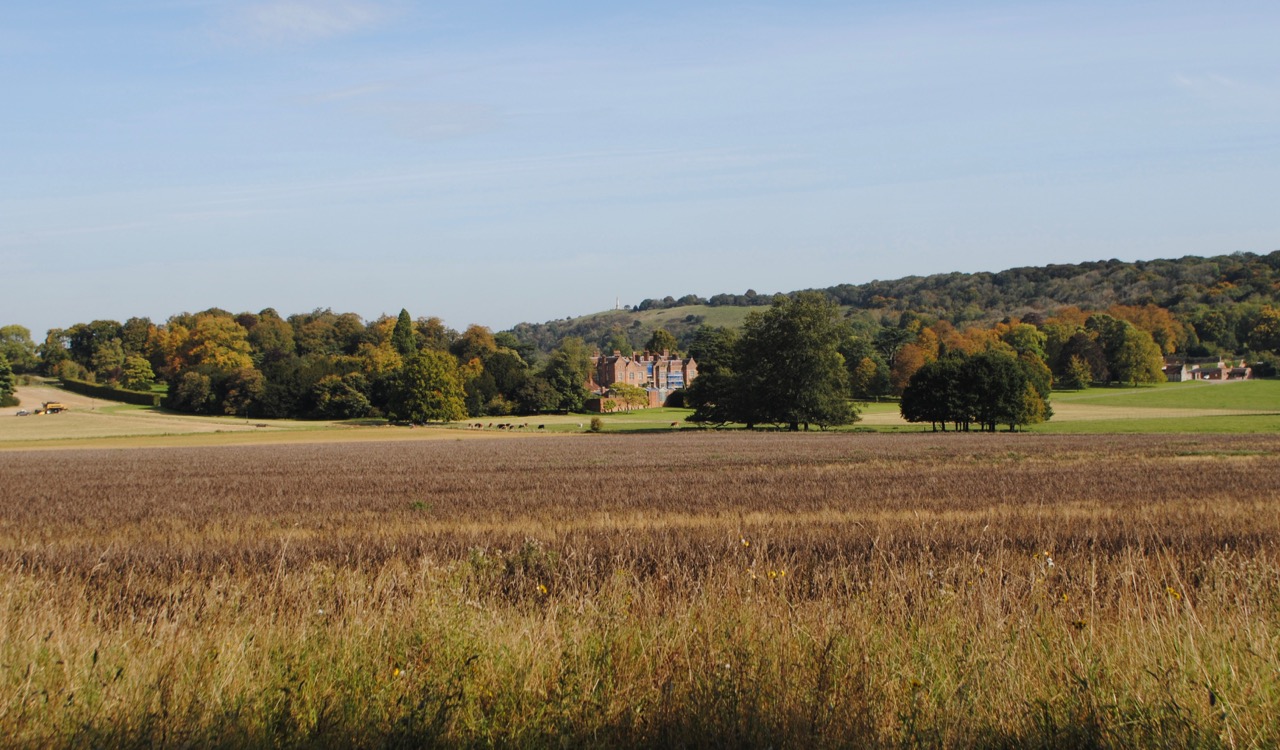 This house of peace and ancient memories was given to England as a thank-offering for her deliverance in the Great War and as a place of rest and recreation for her Prime Ministers for ever.

Into the woods, and through the trees, to Chequers I went, and there I found: not wolves, not teddy bears, but armed cops on patrol. This is neither surprising nor sinister, given that Chequers Court is the Prime Minster’s country pile and that MI5 states ‘the current threat level for international terrorism in the UK is SEVERE’, meaning an attack is ‘highly likely’. What might seem more surprising given this security backdrop, is that the public footpaths through the Chequers estate remain open, which is not only right but also not a bad demonstration of ‘equal before the law’ British values. That the house itself is not, and never has been, open to the public is another matter. Of course, the point of a country retreat is privacy, but how often, actually, is the Prime Minister even there? That said, we probably aren’t missing much: the Chequers entry in the Buckinghamshire volume of the Buildings of England series is fairly short and fairly dull.

Chequers Court lies in a small valley in the Chiltern Hills, close by the village of Ellesborough. The Domesday Book records that the land was then in the possession of Maigno the Breton, presumably one of the Conqueror’s cronies. The Chequers name originated half a century later, when an Exchequer official called Elias de Scaccarium (Latin) or de Chekers (Norman French) became the owner. The manor house was substantially rebuilt in the 16th century by Sir William Hawtrey, who served at different times as Member of Parliament and Sheriff of Buckingham, and most of what is visible from the outside is from his time.

Hawtrey unexpectedly became a gaoler in 1565 when Lady Mary Grey, the sister of the executed Lady Jane Grey, was interned in a small attic room in the house on the orders of Elizabeth I. Lady Mary was a cousin of the Queen and a member of her court. Her crime was to have married in secret without Elizabeth’s permission, and to a man of less illustrious breeding at that. Lower in social standing Thomas Keyes may have been, but not in height. He was more than six feet tall and towered over the tiny Lady Mary. The mockery that the couple’s difference in height might attract was another reason for her displeasure, which gives an interesting insight into the importance of public image in the Tudor court. Lady Mary was released after two years at Chequers but forbidden to reunite with her husband. Keyes was held for a similar period in the Fleet prison, a much less salubrious hostel, and died shortly after his release.

The only notable event of the next 350 years was when Oliver Cromwell’s daughter Frances married into the Russell family, by then the owners of Chequers, bringing with her a collection of Cromwellian artefacts which are still kept in the house. When the MP Arthur Lee (later a Sir and then a Lord) and his wife Ruth took over the estate in 1909 they spent much time and money on restoring the house. (Ruth, the daughter of a New York banker, had brought significant wealth into the marriage. ‘The trouble with you is that your wife has too much money’, said the Prime Minister Andrew Bonar Law when he fell out with Lee over his failure to toe the party line.)

In 1917 the Lees decided to gift Chequers to the nation as a country residence for the Prime Minister, though the transfer did not happen until 1921. In the deed of settlement Lee noted that while past PMs had been ‘men of wealth and famous descent’ with, by implication, their own county houses, that might not be the case in the new age of mass democracy. David Lloyd George, the Prime Minister at the time, typified the new breed, the son of a farmer, without university education, without military experience, and without independent wealth.

Lloyd George was the first Prime Minster to stay at Chequers and he hated it. He thought the views from the windows were boring and complained that ‘It is full of the ghosts of dull people’. He may have meant this remark literally: his favourite dog regularly roused him from his afternoon nap in the library by barking ferociously at the same spot in the room. Lloyd George never saw a ghost and neither did anyone else, but he trusted the dog’s senses.

The footpaths at Chequers will take you through the estate but do not pass near the house. I took the second photo in this post with a long lens, and at the point I was steadying the camera and focusing, a police helicopter passed overhead. Were it not for the cover of the trees I think I might have been pounced on by a snatch squad. As it was I escaped, pursued neither by armed cops nor dull ghosts.