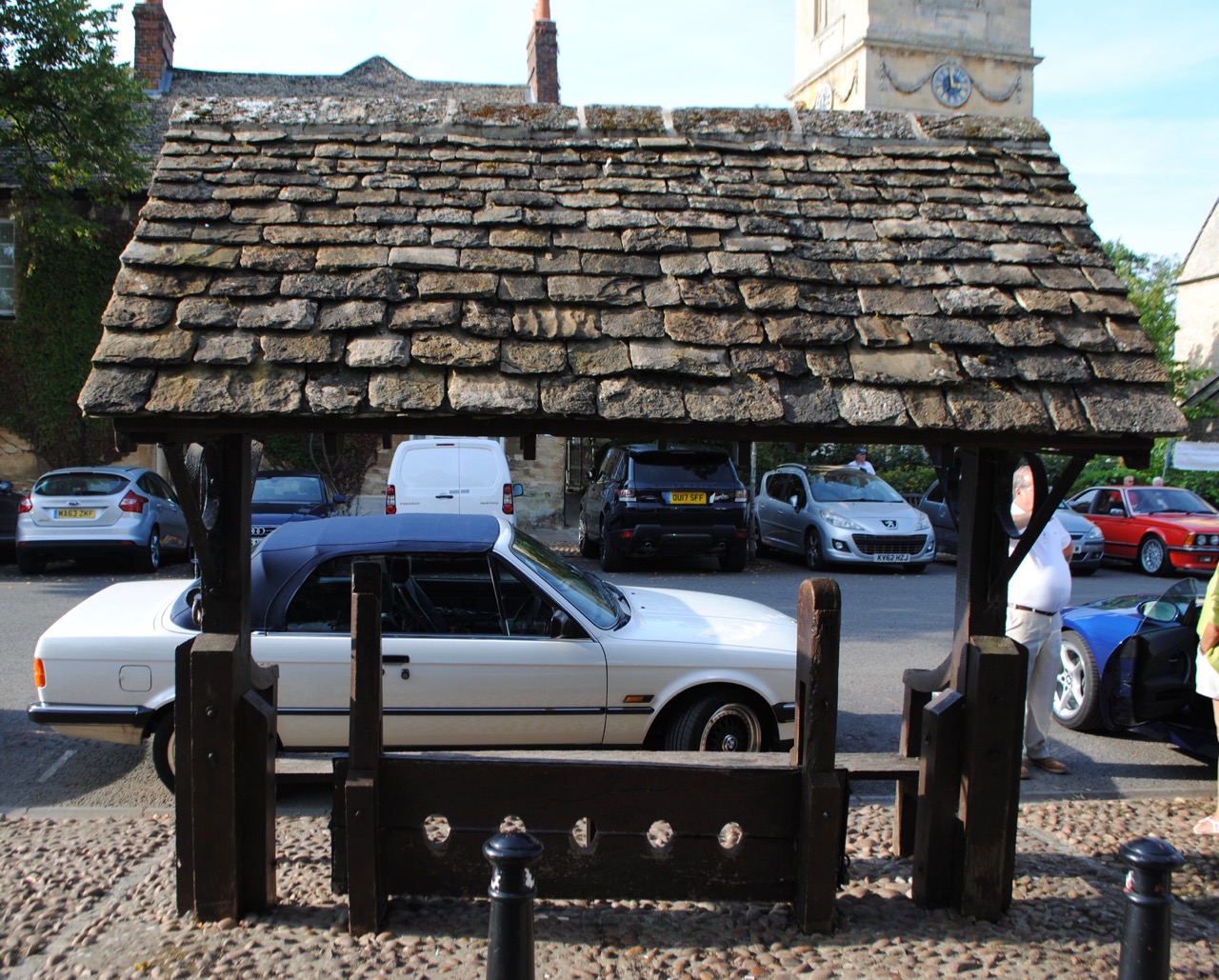 I count him lost, who is lost to shame.

The shock of the stocks in Woodstock being (and please pardon the hyperbole, reader, which was all for the sake of an arresting post title) that they have five leg-holes. Whether criminals in this part of Oxfordshire were required to have just one leg immobilized or whether the odd hole was reserved for the one-legged is unclear. It was thoughtful too of the authorities to provide a covering for the apparatus, to prevent the miscreants from getting soaked when it rained or iced up when it snowed.

Though stocks had been in use since Anglo-Saxon times, it was the 1350 Statute of Labourers that mandated their construction in every town in England, to be used as the standard punishment for ‘unruly artisans’. In 1376 the House of Commons asked Edward III to extend the provision to every village too. Did 14th century England have an ‘unruly artisan’ problem? Most artisans were organized into guilds, wealthy and secretive associations of skilled workmen, which did not function without friction in the creaking feudal hierarchy. One can imagine cocky young craftsmen, with money in their pockets, causing uproar on Saturday nights, pissing up against the Lord of the Manor’s barns, fighting with his male servants, and chasing the female ones. The stocks are not just about punishment but about public shaming too, and perhaps artisans, being proud, independent men, were more sensitive to a spell in the stocks than the average peasant would be (though some of the young bucks may have taken it as a mark of honour, as ASBOs were for some in a later age).

Stocks continued as a form of punishment well into the nineteenth century, the last recorded  instance being in Rugby in 1865. Though they fell into disuse after that, their legality has never been rescinded so I suppose there is nothing to prevent an enterprising magistrate from reinstating the practice. Social media has become the preferred platform for public shaming in the 21st century, though without any due process attached. Those unruly artisans would at the very least have had a hearing before sentence. Though I see nothing wrong with publicly shaming a disgusting bully like Harvey Weinstein, more often than not social media is used against the weak, the vulnerable, and the innocent.

More than twenty years ago I read a news story that I’ve never forgotten, involving the (unsuccessful) use of public shaming in the pre-Internet age. Leopold Kohr was one of those Jewish intellectuals who fled the Nazis and settled in Britain, thereafter enriching our country’s culture. Kohr is rarely mentioned today but many of the issues he wrote and argued about – sustainable urban development, optimal sizes for cities and communities, local accountability – are as relevant as ever. ‘The central disease of our time is not ugliness, poverty, crime or neglect, but the ugliness, poverty, crime and neglect that comes from the unsurveyable dimensions of modern national and urban giantism,’ he once wrote.

In the last ten years of his life Kohr took a house in Gloucester. An old and sickly man living alone, with his Teutonic accent probably not helping, he was targeted by a gang of local thugs. His house was burgled regularly over that decade, including fourteen times in his last year. The  place was regularly ransacked and the manuscript for his final book was stolen, never to be recovered. The local police did nothing. Kohr, who was born in the village of Oberndorf from whence originated the carol ‘Stille Nacht’, (‘Silent Night’), wrote a bitter couplet: ‘The only one sleeping in heavenly peace/Is the Superintendent of the Gloucester police.’ Kohr knew at least some of the names of his persecutors. He wrote them down and displayed them in the windows of his house, hoping to shame either the yobs into ceasing or the local community into self-regulation. It had no effect. Kohr saw this as evidence for his wider thesis about modern societies: ‘There is no community here. We need translucent communities where everyone knows each other, where everyone knows the police, where thieves can be confronted. These crimes were committed in the darkness of mass society.’ Kohr gave up writing in November 1993. ‘These criminals left everything in such a mess that I do not think I can begin writing again. It is a kind of murder’. He died the following February.

The story of Leopold Kohr’s last years affected me deeply at the time. I think he was right to attempt the sanction of public shaming, having been deserted by the police. Would he have succeeded if Twitter had been available then? Let’s go back to Woodstock. Imagine how shaming it would have been, to be locked in the stocks, assailed by the looks and words (and perhaps worse) of people you knew, and who knew you. It would take a long time to get over that, and people in small communities have long memories. But there would have been a way back, eventually. Kohr’s view was that the sanction of shaming, which is a form of accountability, worked only within the bounds of small communities, with their mutual knowledge and ties. Public shaming on social media can reach thousands and millions, but at a time when everyone has less to do with, and less at stake with, their physical neighbours than the inhabitants of a medieval village. The Twitter mob rapidly moves on to the next outrage. The punished one, dazed and bruised, is left to release themselves from the virtual stocks and move on.