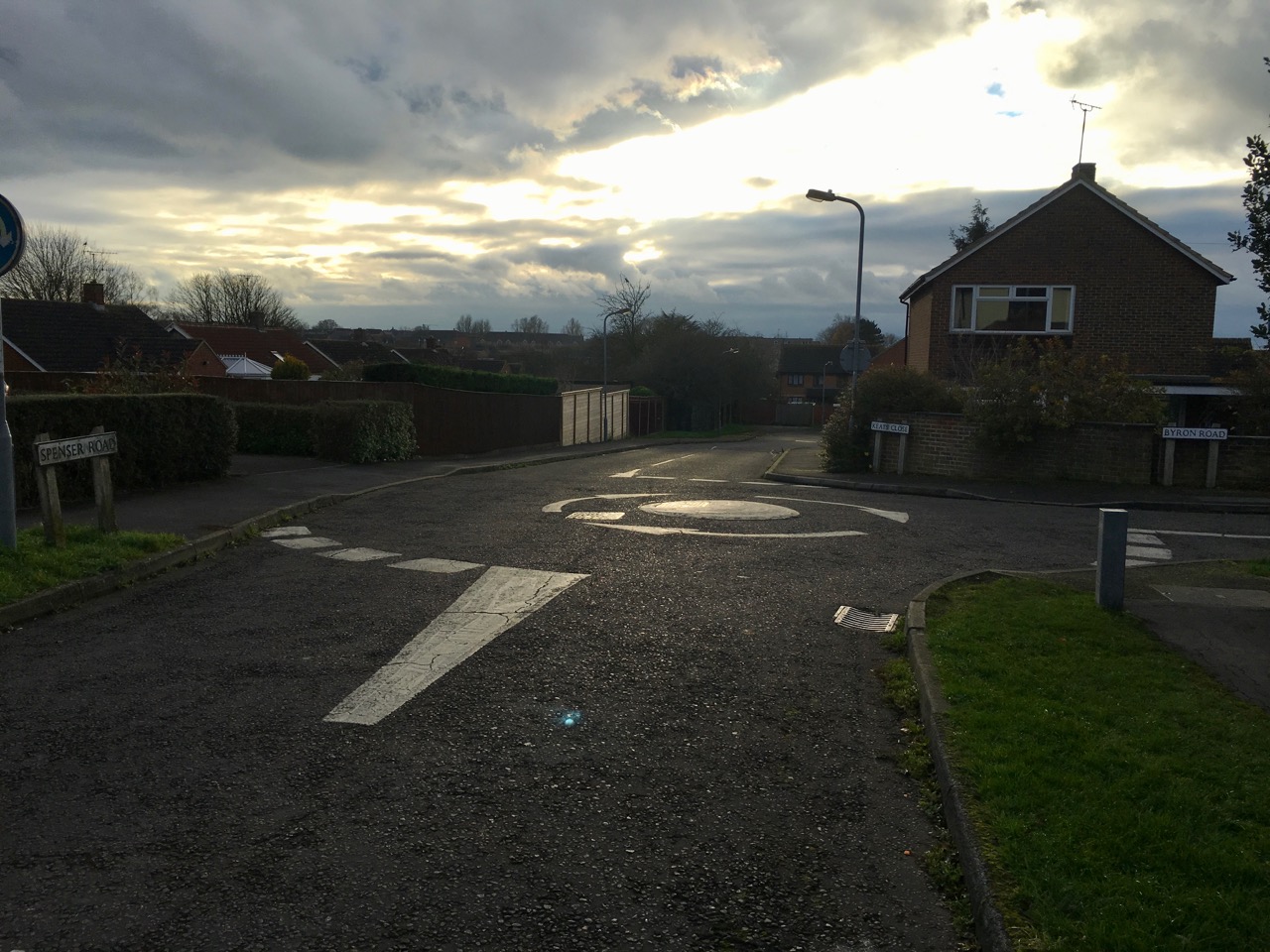 More enduring than bronze now is this monument
I have made, one to reach over the Pyramids’
regal heaps, one that no greedy devouring rain,
that no blustering north wind nor the run of long
years unnumbered nor ages’ flight can ruin. I’ll not
die entirely, some principal part of me
yet evading the great Goddess of Burials.

When John Keats was dying he asked that the inscription on his gravestone read, ‘Here lies one whose name was writ in water’. His wish was honoured and the gravestone can be seen in the Protestant Cemetery in Rome. So far as I know, Keats never visited Aylesbury. Given his own gloomy view of his prospects for literary immortality, would he have been surprised that there is a close named after him in a Buckinghamshire town? And would Geoffrey Chaucer and John Milton ever have imagined that they respectively would have a drive and road named for them in the same area? For in this little world, this blessed plot, this section of a Nineties housing estate, (almost) all the streets are named for English poets. Thus there are Arnold Court, Byron Road, Hardy Close, Keats Close, Milton Road, Spenser Road, Tennyson Road, and Wordsworth Walk, as well as the more generic Poets Chase.

I like to think that the developers enlisted the help of a local literary society. How else to explain the inclusion of Matthew Arnold and Thomas Hardy, neither of whose reputations rests primarily on their verse? And how else to explain the absence of Shakespeare and Blake? Only a selection committee with strong and contrary opinions could have omitted those two, surely? What building company in their right mind wouldn’t immediately have gone for Shakespeare and then googled a top ten list of English poets? Could that local literary society have included a retired English teacher and a self-published novelist who argued that Shakespeare was a chancer from Stratford who stole all his best lines and padded the rest with doggerel? Whatever the explanation there are other oddities in the scheme. How and why have Bishops Walk, Bishops Way and Dolphin Place been inserted into the street plan? Remove these names and there’s room for the two Wills, and Coleridge too. Perhaps oddest of all, there is Carlyle Drive. If this is named after Thomas Carlyle then there must be some other literary criterion in play. Perhaps there really is a hidden Aylesbury/Buckinghamshire connection that I’m not aware of. It is all quite mysterious.

Commemorating poets in this way is better than not commemorating them at all. The street name and, especially, the blue plaque are the default memorials of our age. New statues and monuments are rare, a symptom perhaps of the slow steady breakdown of our cultural consensus. A monument or a statue is a large investment and a public value judgment. A blue plaque is a simple statement of fact: ‘So-and-so lived here at such-and such a time’. New streets on housing developments are plentiful, signs are cheap ,and a street name is provisional and can always be changed. The street itself doesn’t have to be razed to the ground. A statue is an unambiguous endorsement that may attract hostility and even vandalism if the zeitgeist changes.

I can find only one monument to a poet in Buckinghamshire, in Stoke Poges, where Thomas Gray wrote his ‘Elegy Written in a Country Churchyard’. The church in question was St Giles’s and Gray’s monument has been there for a couple of hundred years. Those Aylesbury developers were careful enough (or ignorant enough) not to dabble in twentieth century poets, perhaps because that’s where the literary and political disputes are at their fiercest. In London, the poetic canon is enshrined and memorialized at Poet’s Corner in Westminster Abbey, and there you can find Eliot, Auden, Larkin and Hughes. But leave the Abbey and, apart from the blue plaques, twentieth century verse is almost invisible. There is the statue of John Betjeman at St Pancras railway station and the bust of Rabindranath Tagore in Gordon Square (and Tagore was as much a figure of the nineteenth century as the twentieth), and that’s about it. In fact, the favoured subject for statuary in the last couple of decades, certainly in London, is the professional footballer. Chaucer, Milton, Keats and the rest would have been astonished by that. But perhaps no more astonished than by the Aylesbury streets that bear their names.