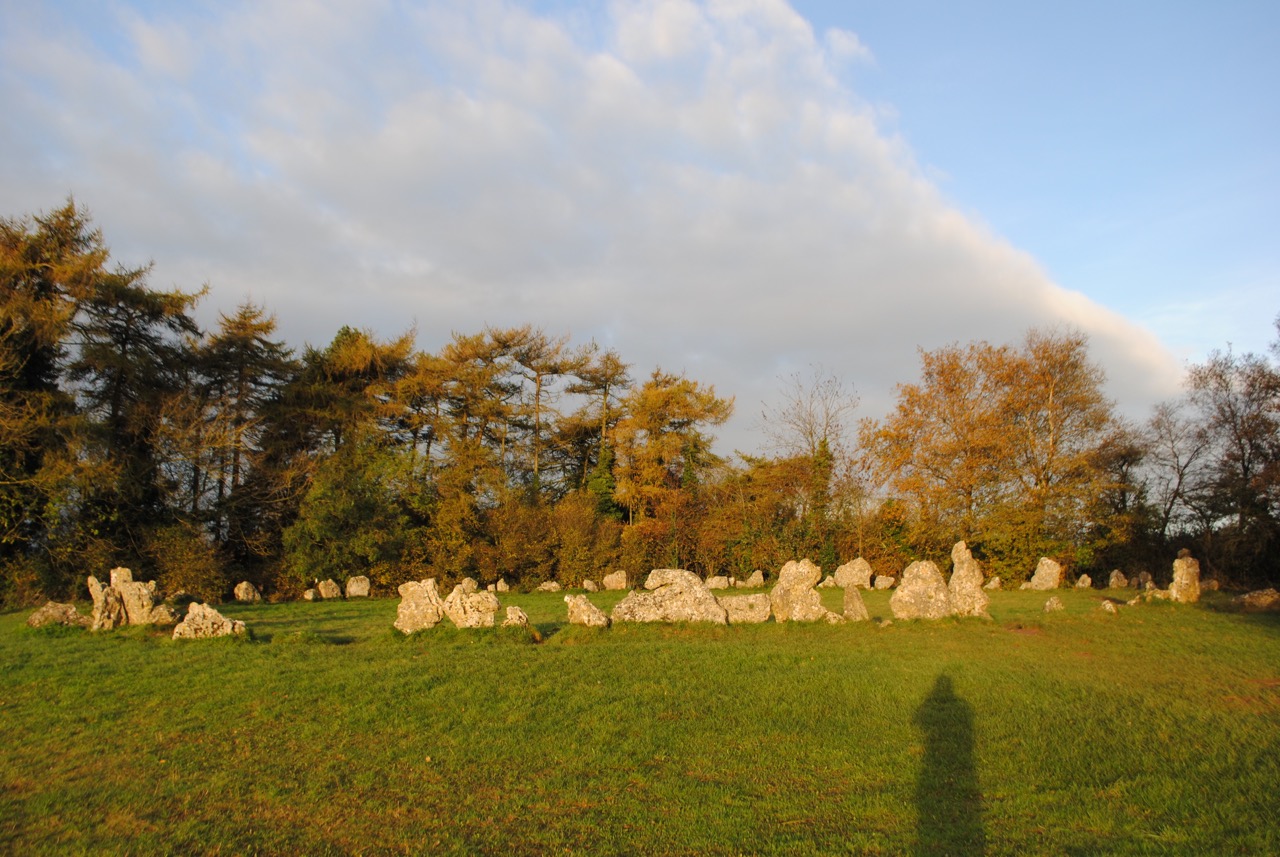 In the region of Oxfordshire there are great stones disposed as if by the hand of man. But at what time, or by what people, or for what memorial or significance this was done is not known. However that place is called Rollendrich by the local people.

Five and a half thousand years ago, on a ridge in the Cotswold Hills, a burial chamber was dug out from the earth to house and honour the bodies of a clan’s deceased. Above the chamber a monument was constructed, comprising five or six large upright stones topped by a capstone. It was intended to stand out, to mark that landscape with special meaning, to impress passing travellers. Dated to 3,500 BC, it was one of the earliest British funerary monuments and would have gained wide recognition, because ridgeways were the highways of the prehistoric world, connecting peoples, carrying goods, transmitting ideas and practices. This monument became known as the Whispering Knights.

The site must have retained its sacral significance through the succeeding centuries because a thousand years later, around 2,500 BC, a stone circle was constructed not far from the burial chamber, an arena for rite and celebration. The design, around one hundred stones with two outside the circle marking a portal entrance, is similar to neolithic monuments found in the Lake District, prompting speculation that it was built by people who had come down from the North. Seventy of the stones have survived to the present day, the rest having been carted off for use as building material over the centuries. The circle is now known as the King’s Men.

Another thousand years passed. In 1,500 BC a large standing stone was erected not far from the circle, probably to mark the burial ground that had developed there. Archaeologists have found barrows marking interments, wooden posts marking cremations, and later burials from the Anglo-Saxon period. This large, dignified stone, made of oolitic limestone like the others at Rollright, has been particularly ravaged, and not just by time and weather. Cattle drovers would take pieces to keep the Devil at bay, soldiers would use them as good luck charms, and tourists took them away as souvenirs. This gradual chipping away has resulted in the odd serpentine shape that the stone, the King Stone, has today.

It is now three and a half thousand years since the King Stone was erected, and this group of monuments on the Oxfordshire/Warwickshire border, close to the villages of Great Rollright and Little Rollright, is called the Rollright Stones. The site has several legends attached to it, some involving fairies, some involving kinetic stones, but the earliest recorded tale, noted by the antiquarian William Camden in his book of 1586, Britannia, is that the three groups are actually men turned to stone. A rhyme recorded a couple of centuries later characterised the stones as a petrified Danish army:

Said the Danish General,
If Long Compton I could see
Then King of England I should be.
But replied the Saxon General
Then rise up Hill & stand fast Stone –
For King of England thou’lt be none.

Long Compton is a village in the valley below the ridge, visible once the crest is reached. It had a longstanding reputation for witchcraft – one local saying claimed ‘there are enough witches in Long Compton to draw a wagon-load of hay up Long Compton Hill’ – which may be why the legend evolved to include a witch. In this version a king (no longer Danish) arrived at Rollright with his army and was confronted by the witch who told him:

Seven long strides shalt thou take and
If Long Compton thou canst see
King of England thou shalt be.

Aware that he would be able to see the village from the crest of the ridge the king triumphantly took seven strides forward, saying:

Stick, stock, stone,
As King of England I’ll be known.

But the witch stopped him in his tracks by raising a mound of earth (actually one of the burial mounds on the site) to prevent him getting sight of Long Compton. And then she spoke the words which turned the king and his men to stone:

This legend may account for the names that the stones acquired, or may have been created to explain them. The King Stone is the petrified king himself, the King’s Men circle is his army, and the Whispering Knights is a group of conspirators against the king that nonetheless were also turned to stone.

It’s a good tale, but not as intriguing, to me at least, as the lives and beliefs of the people, those distant ancestors of ours, who assembled and sacralized the stones of Rollright. When the first of these, the Whispering Knights, was built, how fragile the life of the individual must have seemed and how uncertain the survival of the clan. Coming up with estimates of prehistoric populations is extremely difficult and is only guesswork at best. In his book Britain BC the archaeologist Francis Pryor estimates the Early Neolithic (c. 4,000 BC) population of Britain to have been around 100,000. A small, one might say endangered, species on a large island. How like us they seem, with their honouring of the dead, their belief in some kind of afterlife or other dimension of reality, their desire to impose themselves on the landscape, their need for ritual, their gathering to sing, dance and feast. And yet how different: in what languages did they speak, what rites did they celebrate, what thoughts did they have of their future as an animal species? Did they even think of themselves as possessing a common humanity, or were the concentric circles of kin, stranger and enemy separate and sufficient?

There is a deep magic and beauty about Rollright, about the stones and the landscape in which they persist. And there is something there, too, that is intensely moving. Think on those humans of the distant past, living barely above subsistence level, in constant danger – how hard their lives must have been. And yet they heaved the stones, arranged them, and dressed them, using their strength and their hands, using simple tools, perhaps using ropes and rollers. This place, imprinted with their creativity and labour, was important to them, meant something to them. That tenacity, imagination and search for meaning is both inspiring and humbling.