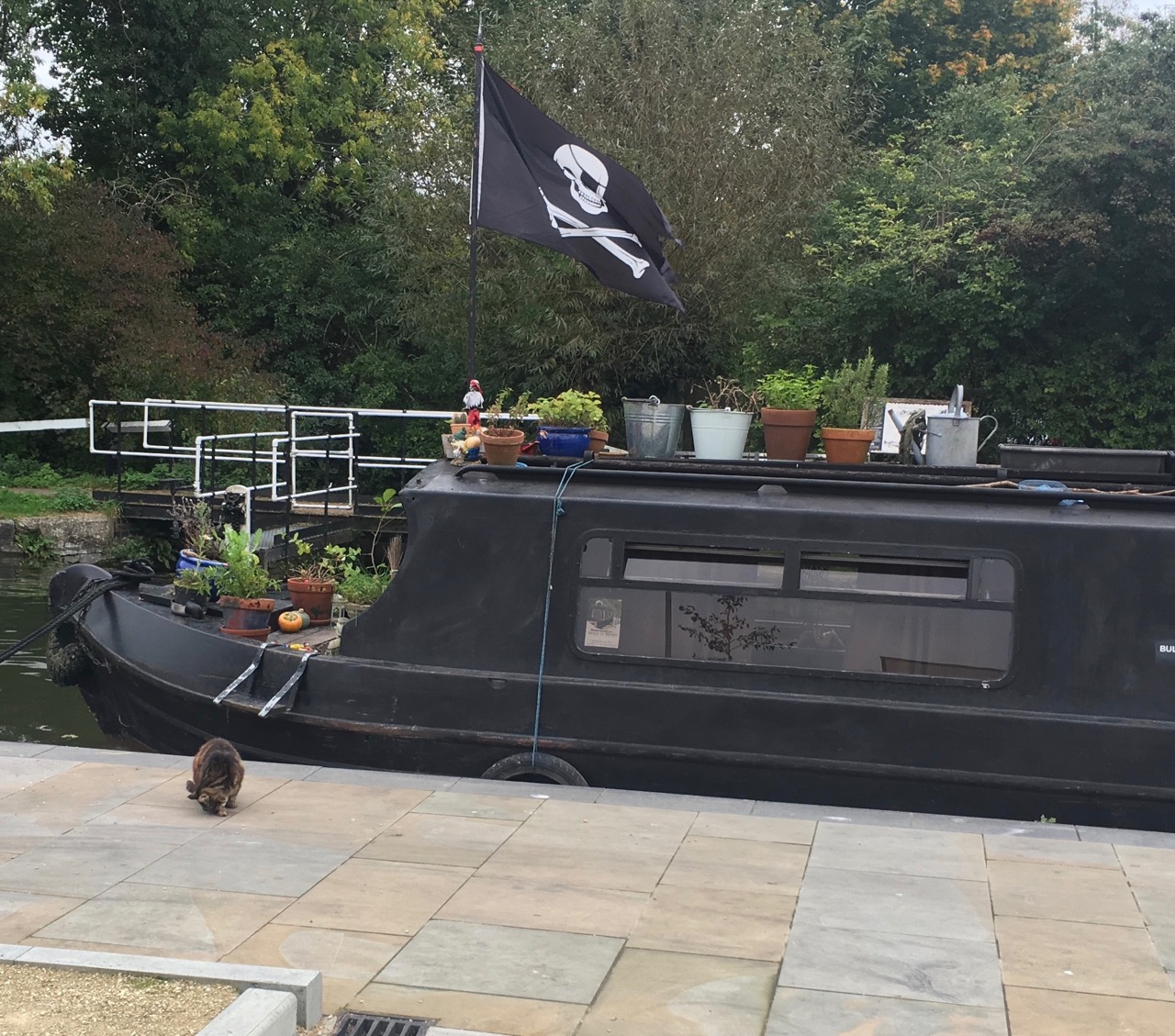 Call me Fishpail. Some years ago — never mind how long precisely — having tired of the comforts of domesticity, and with nothing particular to bind me to my human home, I thought I would sail about a little and see the watery part of the world. Making my way to the Grand Union Canal I fell in with a couple of humans, ‘retired’ they called themselves, who were traversing the waterways during the summer months. They wanted a pet and I put up with them because the food was rich and plentiful, and I was able  to learn the ways of the water. Come autumn, with its chill and dark evenings, they tied their boat up at Oxford and went home. When they called for me to go with them I hid.

For days and then weeks I searched for another berth. Autumn was turning to winter. I tramped the towpath from Oxford to Wendover and back. A cold coming I had of it, just the worst time of the year for a journey, and such a long journey: the ways deep and the weather sharp. I lived on scraps, mice I caught, remains of kebabs and fried chicken I found. Among the boats that were inhabited I found no refuge. Most already had cats and even when the humans might have taken me in, the resident felines made it clear I was not welcome.

One especially bitter evening, when the ice burned my paws and the hunger clawed my guts, I happened to see a black barge skulking in the shadows of the Aylesbury Basin. Two women and a man sat on the deck smoking, swaddled in winter clothing. I approached slowly, hunger urging me forward, caution holding me back. One of them spotted me. ‘Ah, what have we here?’ she said. ‘Throw it a piece of that leftover chicken. We need a mouser and besides, it will give us luck to have a cat on board.’

Grateful, I joined the crew, and grateful too, I was left to my own devices so long as I did my job. It wasn’t until a few days later, when I was dozing in an apple barrel that I realised the true nature of the barge and its crew. A drunken voice, rousing me, boasted: ‘Here it is about ladies and gentlemen of fortune. We lives rough, and we risk swinging, but we eat and drink like fighting-cocks, and when a cruise is done, why, it’s hundreds of pounds instead of hundreds of farthings in our pockets. Now, the most goes for rum and a good fling, and to sea again in our shirts.’ The rest of them roared and laughed and banged their glasses of rum on the table top. And at that moment I knew what they were: pirates!

I was not afraid, far from it. I threw my lot in with them and became a pirate cat. Together we cruise the Grand Union, inspiring fear and respect in the minds of other crews, but showing mercy and occasional kindnesses too. We live by a rough code but never a cruel one. We take what we need and leave the rest. When we ram and board and subdue, I am in the thick of it, and every cat on the canal speaks my name with awe. When the long day wanes and the slow moon climbs I know that I am Fishpail and that I will sail beyond the sunset, and the baths of all the western stars, until I die.

[With acknowledgements to Melville, Andrewes, Stevenson, and Tennyson, some of whose lines I’ve pinched, and to the cat I met, who is actually one of the crew of the Happy Potter Art Boat, none of whom are real pirates as far as I know. ]