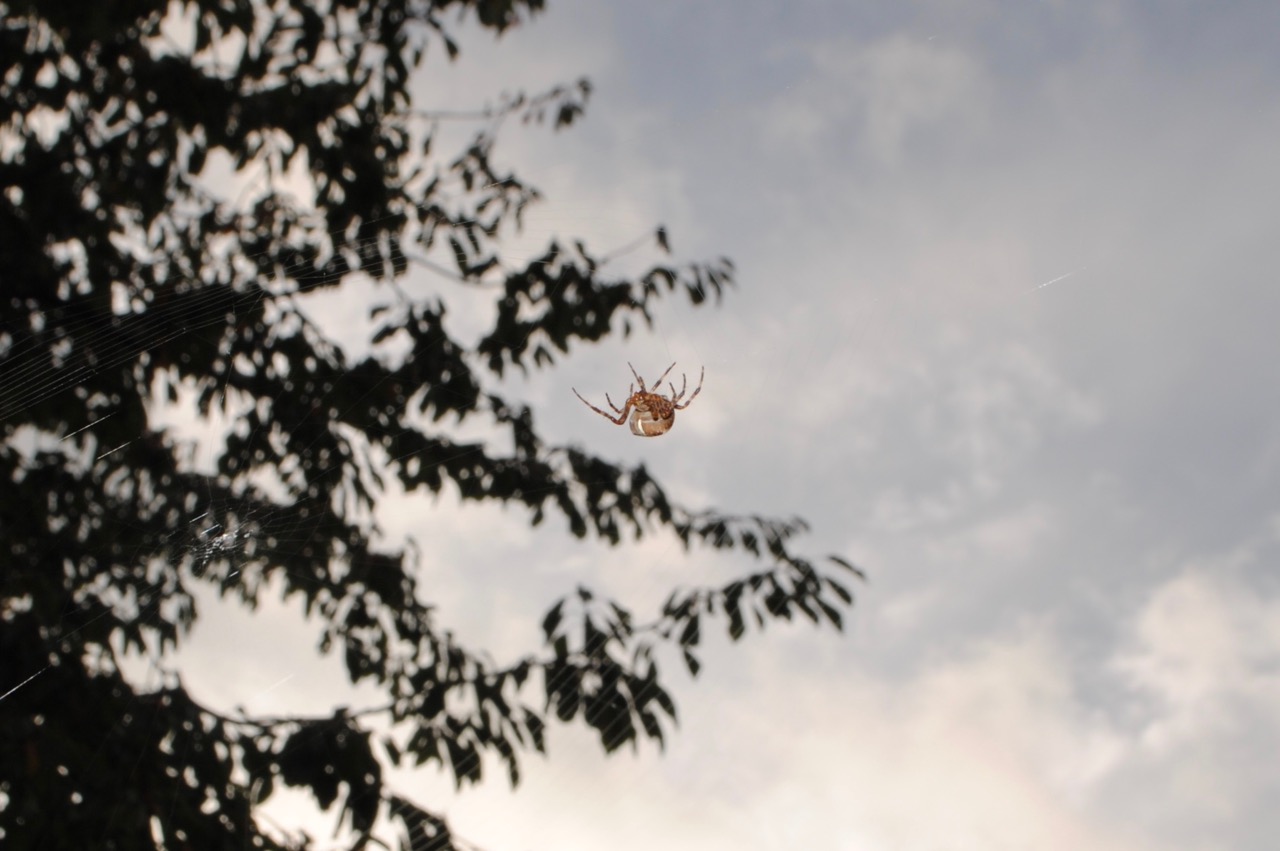 A noiseless patient spider,
I mark’d where on a little promontory it stood isolated,
Mark’d how to explore the vacant vast surrounding,
It launch’d forth filament, filament, filament, out of itself,
Ever unreeling them, ever tirelessly speeding them.

And you O my soul where you stand,
Surrounded, detached, in measureless oceans of space,
Ceaselessly musing, venturing, throwing, seeking the spheres to connect them,
Till the bridge you will need be form’d, till the ductile anchor hold,
Till the gossamer thread you fling catch somewhere, O my soul.

Summer is over and it’s dark now when I leave for work in the morning. In the last week or two, walking along the path by my block, I could feel strands of spider-silk against my face and neck. I couldn’t see a thing, but I knew that I was the oafish human, blundering through the overnight constructions, wrecking the arachnid engineering. It wasn’t until the weekend and daylight that I noticed the extent of the work that had been going on. I counted almost twenty of them, plump, with black and brown markings, rather beautiful little beasties. I think they’re European Garden Spiders, aka Cross Orb-Weavers. I have always harboured a Robert Bruce-like admiration for the industry and persistence of spiders. I don’t find them creepy or scary so much as alien. I cannot process the hypothesis that way back in time, down many branches of the evolutionary tree, we have a common ancestor.

I think of spiders as solitary creatures, and yet here they were, a crowd if not a mass. The traditional spider collective nouns, cluster or clutter, did not seem right in the circumstances. The arrangement was too orderly, the distances between them too respectful, the webs spaced out and beautifully wrought. It appeared to be much more than a cluster or clutter. I thought of a gathering, or even a convocation. I thought too of a novel I read recently, Adrian Tchaikovsky’s Children of Time, in which a spider species, through an accident of genetic engineering, achieve intelligence, consciousness and, eventually, world domination (the world is not ours). Watching the Cross Orb-Weavers hanging there in serene expectancy, poised for the quiver that would signal the fly feast, I could imagine them as conscious even now. Though not as we are conscious; spider time, if it exists, is not human time.

I took some unsatisfactory photos with my phone. When I returned a few days later with my camera, a night of strong wind and rain had washed most of the little engineers and their work away. But there were four or five still there, their webs wind-torn and rain-rent, tenacious survivors of the storm. Will the others be back? I hope so.