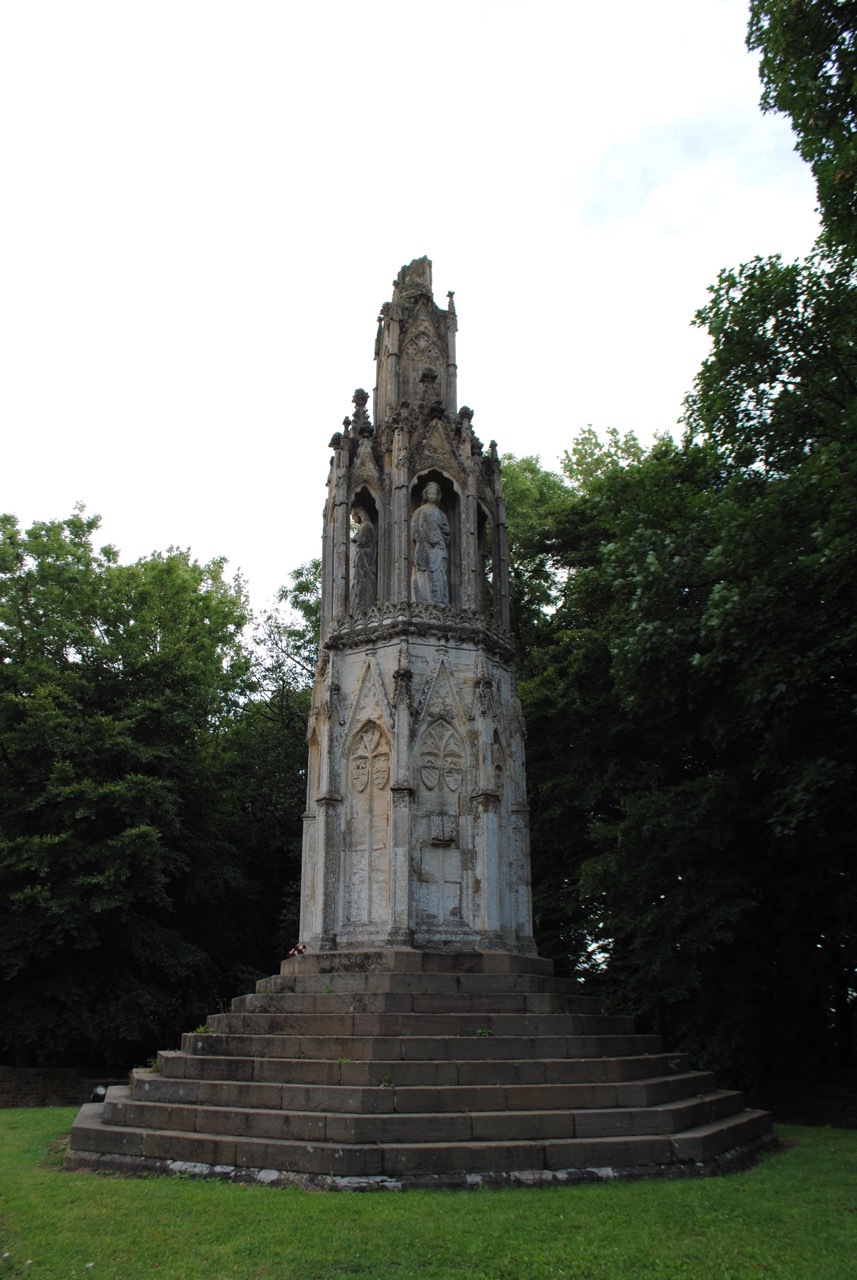 This good Queen Eleanor…well worthy was she to be remembered by these crosses as monuments, which instead of statues were erected by her husband to her honour.

The Queen knew she was dying. Eleanor of Castile, Queen of England, wife to Edward I, had survived the births of sixteen children, a civil war, and a year on crusade with her husband. But by February 1290, at the age of 48, her declining health prompted her to make arrangements for her passage to the next life. She gave £100 to the London Dominican priory, Blackfriars, to prepare a chapel for the burial of her heart, ordered the stone for her tomb at Westminster Abbey, and made donations to several religious houses. In her 2014 biography Eleanor of Castile: The Shadow Queen, Sara Cockerill notes that in April that same year Eleanor visited Thurrock in Essex, the home of the Torel family, and that it was William Torel who made the effigies of Eleanor for her tombs in Westminster Abbey and Lincoln Cathedral.

Eleanor’s end came on 28 November 1290 in the village of Harby, near Lincoln, while on one of her regular tours of her properties. Edward, most uxorious of monarchs, was devastated. He had been fortunate in his mate. Eleanor was wife, companion, confidant, advisor, interior designer, property manager and fundraiser for him. She had also, so the story went, saved his life in Palestine. When Edward was stabbed with a poisoned dagger by a Saracen assassin it was Eleanor who sucked the poison out. The story may have been apocryphal but it chimed with the contemporary view of the fierce love that bound the couple.

Sara Cockerill dubbed Eleanor the ‘Shadow Queen’ in response to the lack of other biographies and the difficulty of creating a portrait from the scarce historical sources. Yet Ms Cockerill, whose book does much to coax Eleanor from those shadows, argues that Eleanor ‘was a remarkable woman for any era…a highly dynamic, forceful personality whose interest in the arts, politics and religion were highly influential in her day – and whose temper had even bishops quaking in their shoes.’

After her death Eleanor’s body was taken to Lincoln in preparation for what was to be, unusually, a ‘triple burial’. Once her organs had been removed, her body was embalmed and stuffed with barley. Her viscera were buried in Lincoln Cathedral, where a 19th century replica of the tomb can be seen today. The original, similar in design to the Westminster Abbey tomb, was destroyed in 1641 by Parliamentary troops in a fit of republican vandalism. The Queen’s heart was taken to the chapel at Blackfriars and interred as she had planned. That tomb was destroyed in an earlier spate of political vandalism during the Dissolution. The magnificent Westminster Abbey tomb has survived to this day.

Edward was determined to mark the death of his remarkable Queen in significant and elaborate fashion. There has been nothing like the cortège of Eleanor, before or since, on this island. Her embalmed body was dressed in loose robes, crowned, and placed on an open bier. The procession, with the Queen’s chaplain at its head and Edward following the bier, left Lincoln on 4 December. The journey back to Westminster took just under two weeks, with much of the route following the ancient roads of Ermine Street and Watling Street, and most of the overnight stops on or close to Eleanor’s landholdings. She was buried in Westminster Abbey on 17 December 1290.

There has been nothing, too, in Britain, like the series of wayside monuments that Edward ordered to be erected to mark the overnight stops of the cortège. The idea was probably inspired by the Montjoies monuments that were erected in France to mark the stops of Louis XI’s funeral procession, but the Eleanor crosses were unique in their design and purpose. Whereas Louis’s monuments were intended as symbols of his intended canonisation, there was no question of Eleanor becoming a saint. The crosses were testament to Edward’s love, grief and respect, monumental pins marking the route map of a final journey.

In all, twelve crosses were built between 1291 and 1294, with some master masons responsible for more than one of the group. The locations from the start of the route to the finish were Lincoln, Grantham, Stamford, Geddington, Hardingstone, Stony Stratford, Woburn, Dunstable, St Albans, Waltham, West Cheap, and Charing. All twelve had the same basic three-tier form, but all differed in their detail. The bases were octagonal or hexagonal, with the exception of the Geddington cross, which is triangular. The open second tier housed statues of the queen and the solid third tier was topped with a cross. Only three of the original monuments survive: those at Geddington, Hardingstone, and Waltham.

I visited the Hardingstone cross, sited on the edge of what was once Delapré Abbey. The village of Hardingstone is now a suburb of Northampton and its Eleanor cross stands between the abbey walls and the A508. It has an octagonal base with twelve steps (a couple of them now buried) leading up to it. In his 1875 book Ancient Stone Crosses of England, Alfred Rimmer, in either scientific or whimsical mood, compared the plan to a snow-crystal. Each of the eight sides is decorated with a blank Gothic arch enclosing a pair of shields, alternating between those of Leon and Castile, and England and Ponthieu, heraldic warrants of Eleanor’s bloodline. The four stone books in alternate arches would probably have been embellished with prayers and episodes from her life. (When first built, all twelve crosses would have been lavishly decorated with paint, gold leaf and coloured glass). The statues of Eleanor on the second storey remain, albeit in poor condition, but there is no longer a cross at the top. (For a more detailed description, see Bob Speel’s Sculpture of the Month post.)

Though it may miraculously have survived the centuries, the Hardingstone cross has an unhappy history of decay, restoration and neglect. The original cross at its apex was lost some time before the 16th century. In 1713, when it was noted as being in a ‘dilapidated condition’ the monument was extensively repaired, a new cross was added and four sundials were mounted on the bottom tier. Further repairs took place in 1762, and in 1840 another major restoration was carried out. At some point the replacement cross and the sun dials disappeared. JMW Turner’s sketches of 1830, though indistinct, do not feature a cross.

Since 1840 the Hardingstone cross has been left to decay, its stonework rotting, its crevices sprouting weeds, its grandeur grown shabby. Previous eras might (dubiously) be excused on the grounds of poverty or ignorance. That so precious a monument could be neglected in recent years, given the rise of the heritage-industrial complex and the flood of lottery money washing through the land, is both astonishing and depressing. It seems to have been a tale of bureaucratic paralysis and standoff, with the County Council and the Borough Council each insisting that the other is responsible. The Hardingstone cross continued to crumble as each side waited for the other to blink first. The lack of civic pride is a telling index of the present cultural moment.

Thanks to a campaign led by the estimable Northampton Battlefield Society, Historic England intervened, inspected the monument, and produced a condition report. The Borough Council has now taken on responsibility for repairs, though without accepting ownership of the cross. ‘Emergency maintenance’ work begins next month, with a further, and ‘full’, condition report to follow. The author Matthew Lewis supports the campaign and runs a Twitter account providing regular updates.

Edward ordered that two candles were to burn for all time beside Eleanor’s tomb in Westminster Abbey. They were lit for two and half centuries before being extinguished during the Reformation. The Hardingstone cross, a far more important remembrance of Eleanor, must not be allowed to perish like those candles.