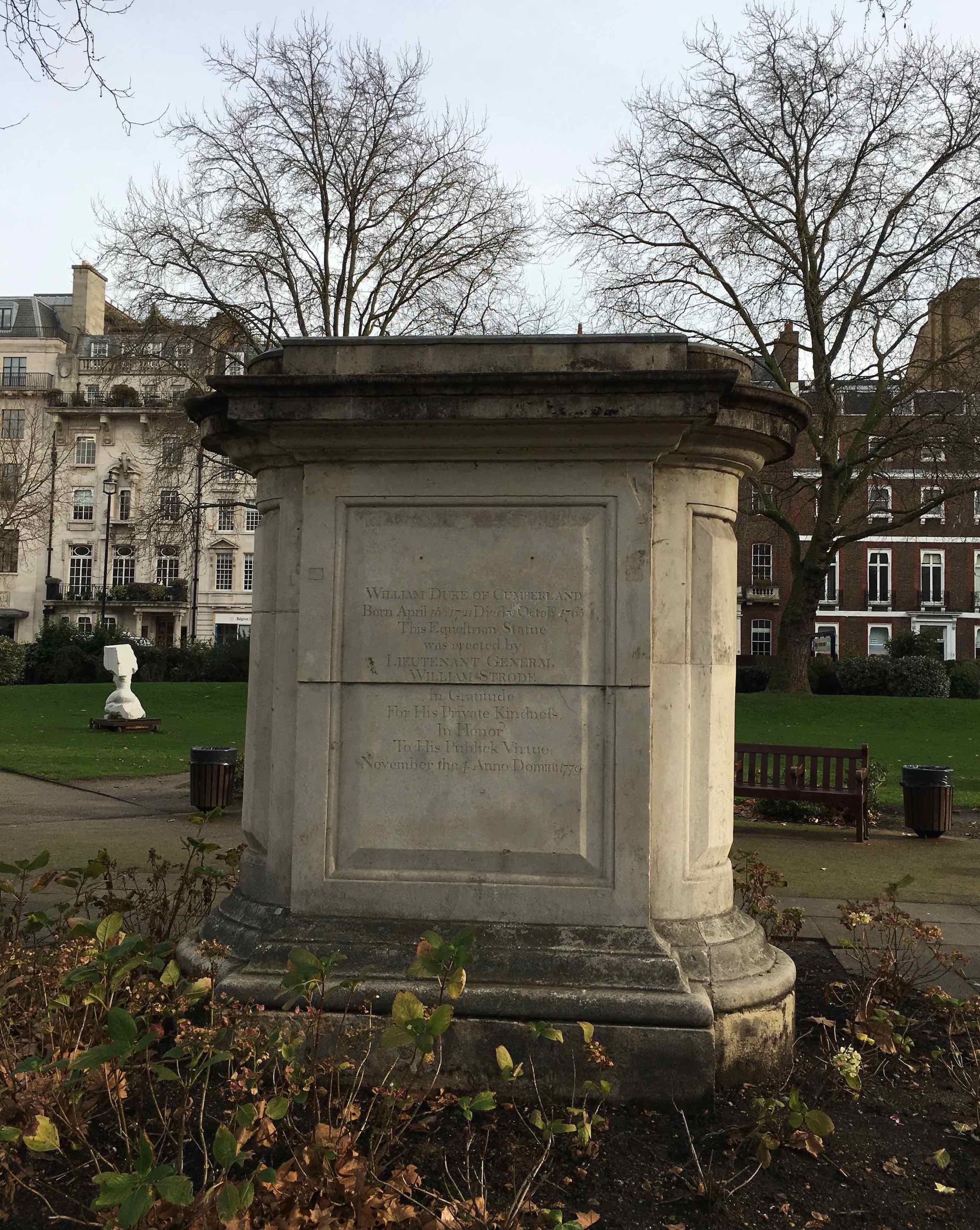 Lord Semple’s Battalion…wheeled and enclosed them: a scene of carnage ensued: for they discharged with the muzzles of their guns at the rebel breasts, and stabbed em in the back with their Bayonets till they cut them off to a man. Some old military men said they never saw Corpses lye so thick, nor a field so strew with Officers, as that was after the Battle.

(from a contemporary account of the Battle of Culloden, quoted in Battles of the ’45 – Katherine Tomasson & Francis Buist)

I sing of arms and the man, though it was me, a Scots horse, who was exiled by fate. They will tell you that this vacant plinth in Cavendish Square — in London, foulest of cities — once supported a statue of Prince William, Duke of Cumberland, commander of the British forces at the Battle of Culloden, and that at some point in the 1860s the dilapidated statue was taken away for repair and never returned. An equestrian statue it was and I was that equus (aye, I am an educated horse and have some of the Latin). Yes, it became dilapidated — age does that to all men and beasties —but it was not a repair job that accounts for its disappearance. This is how it was: how I came to London and how I escaped.

Robert Mercer of Aldie was my master and we were among those assembled by Lord Nairne of Perthshire, in answer to the Bonnie Prince’s summons. Nairne was no great enthusiast for the Cause but when duty called the Lord had no option but to answer. Robert’s son Thomas came along too, as a cornet, though the laddie was barely out of short breeches. By the time we reached Culloden, we were an army too tired and hungry to dwell much on its victories at Prestonpans and Falkirk. We knew that Cumberland’s troops were coming and that Culloden would be decisive.

There was an uneasiness among us all on the morning of the battle, apart from Prince Charlie himself, who was as blithe as ever. Some thought that our ground was poorly chosen, others worried that the British were better prepared, better fed and better rested than we were. There was little planning and less organisation. We horses had to make the best of it. War is men’s invention. We do not want it, do not seek it and do not practice it among ourselves. But we are loyal beasties above all. Men took us from the ancient steppe and turned us into princes and labourers. If we are not equals, we at least work alongside one another.

Us Scots fought hard and bravely but what surprised me was how quickly it all turned against us. The English were ferocious in their discipline and remorseless in their killing. Robert Mercer was shot through the head and wee Thomas through the belly. I left them both and galloped back through the lines. There I saw the Bonnie Prince with fear on his face for the first time. I heard him trying to encourage the men: ‘Rally, in the name of God. Pray stand with me but a moment – otherwise you ruin me, your country and yourselves’.  It was too late.

When it was over I stayed on the field — where was I to go? There was barely a scratch on me but many from the horse clans had fallen. I wept and waited. The Duke of Cumberland rode through the calmed carnage, ordering the wounded on our side to be executed — this was how he earned his name of ‘Butcher’ — or held for public punishment. He passed by the bleeding Fraser of Inverallochy, who stared right back at him. Cumberland asked the young colonel who he belonged to.  ‘To the Prince,’ he replied. The Butcher had him shot. He saw me, shivering, eyes downcast, and told his valet to take me back to the camp.  ‘A gift horse, ‘ he said and the men around him roared.

And so, eventually, to London. And so, eventually, to our immortality in gilded lead. The Duke, proud and loud at first, grew immobile and reflective. I bided my time, occasionally gleaning precious grains of news from home, listening to the passers-by. A hundred year or more I stood there, frozen among the Sassenachs. And then one night, something inspired me, filled me with speerit. A breath of Guid, I think. I leapt from the plinth, scattering the vagabonds lurking in the square after dark. Billy the Butcher woke and hung on for dear life, yelping like a cur. I threw him off at the Tottenham Court Road turnpike, leapt the gate, and headed for the border and the auld country.

[This post was inspired by the empty plinth in Cavendish Square, London, which once supported a equestrian statue of the Duke of Cumberland, known in his time as the Butcher of Culloden.]