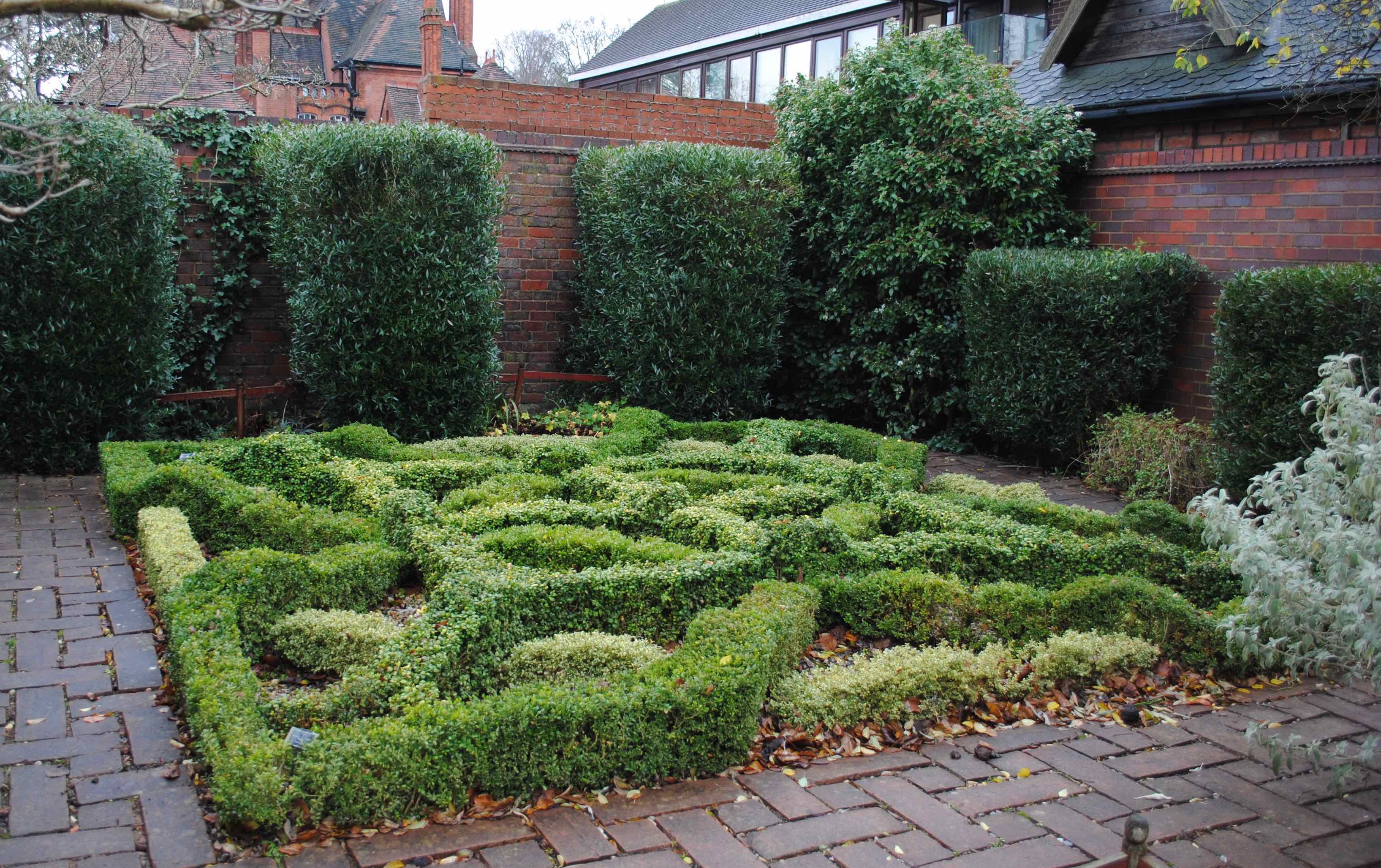 Some knots in my own life had brought me to Birmingham in December. Wandering through Edgbaston, I went into the Botanical Gardens and found this knot garden. Once you start noticing knots, they are everywhere, whether chaotic tangles, intricate patterns, or tools of sailors and climbers (The Ashley Book of Knots, an encyclopaedia of the subject, lists more than 3,800 types). The motif occurs through history as decoration and symbol. There are the sacral knots of the Minoan snake goddesses, the endless knot of Tibetan Buddhism, and the Celtic knots that adorn everything from stone crosses to illuminated manuscripts, and, latterly, bodies.

The distinctive design of the knot garden, with its embroidered appearance, originated in the first Elizabethan age. Unlike modern knot gardens, which tend to be dominated by shrubs like dwarf box, the original gardens were full of herbs: marjoram, thyme, lemon balm, hyssop, rosemary and others. This was a time when the natural world was still thought to be full of symbols and meaning – it couldn’t be any other way, God having created it all. The doctrine of signatures, a theory prevalent not just in this period but in many pre-scientific cultures, held that certain plants resembled, or displayed the ‘signature’ of, the body parts they could cure, hence eyebright for eye infections and liverwort for liver complaints.

Given that knots were also used for magic spells, divination and cures, I wonder if there are hidden meanings in the knot garden that we moderns are unaware of. Could the design of the garden itself have been curative or inspiring to the walker of its paths? As an example of the power which knots were once thought to possess, here is a divination method that John Aubrey, the antiquarian, gave in his Miscellanies. The basic operation involves tying one’s left garter to one’s right stocking, reciting the verses, and making another knot at each comma:

This knot I knit,
To know the thing,
I know not yet,
That I may see,
The man (woman) that shall my wife (husband) be,
How he goes,
And what he wears,
And what he does,
All days,
And years.

In Michael Tippett’s 1970 opera, The Knot Garden, the garden is used as a metaphor for psychological complexity and the maze of human relations. Tippett was responsible for the libretto as well as the music, and the work is a child of its time, a self-indulgent psychodrama (the knot metaphor crops up in another work of the period: the outlaw psychiatrist RD Laing gave the title Knots to his 1972 book of verse). I’ve listened to it a couple of times and found it dull and a bit ridiculous. The music critic Norman Lebrecht calls it ‘a rambling indulgence in late-Sixties psychobabble, unrelieved by so much as one credible character’. I wonder what the Elizabethans would have made of it.

The precise symbolism of the knot garden is unknown but it’s conceivable that the order and symmetry was intended as a microcosm of the Tudor state. The one in the Botanical Gardens was a little disordered when I visited, the gravel covered in fallen leaves and the shrubs in need of a trim, a microcosm of a different state and my own disordered state of mind.