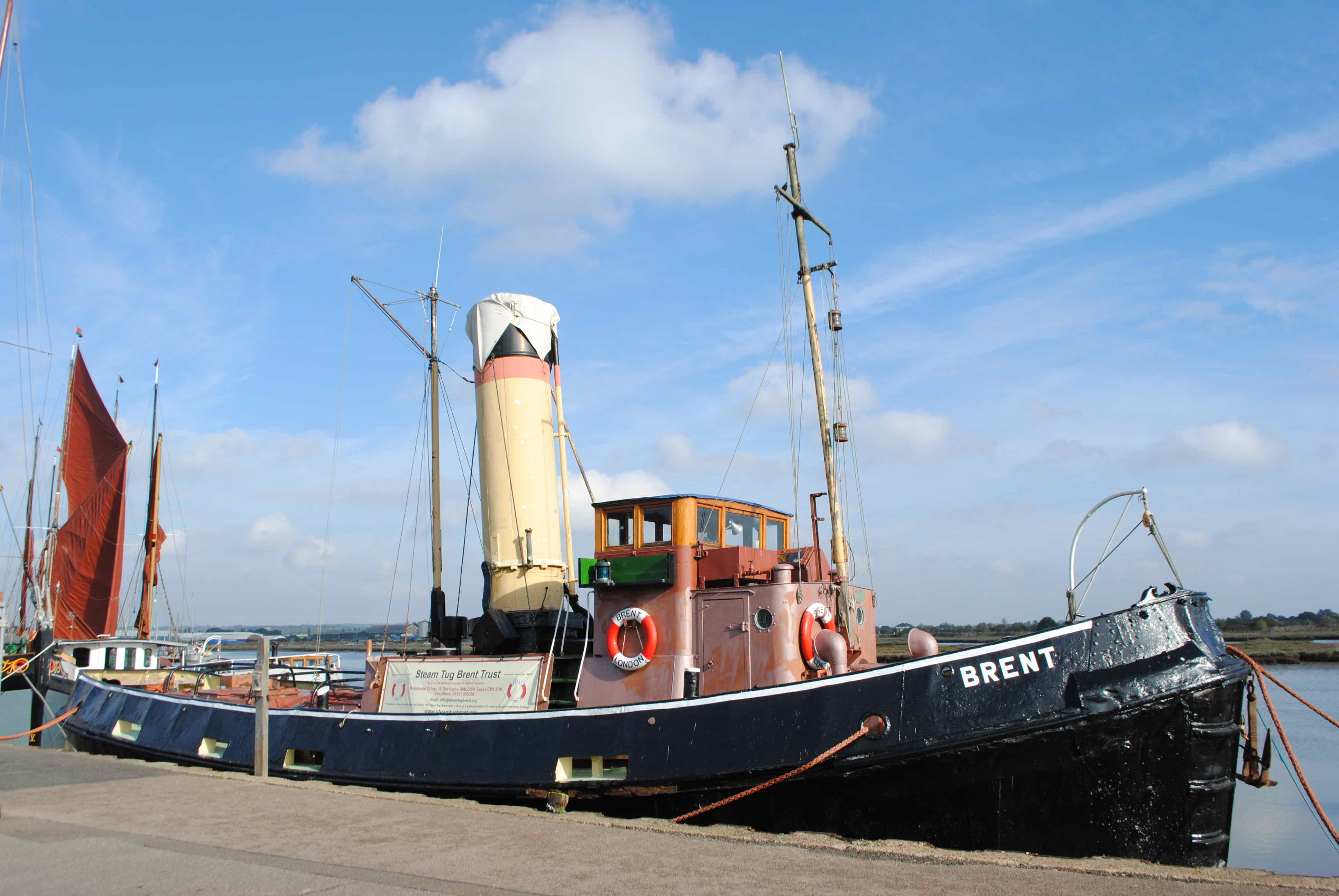 The Empire expanded, cess-pits were banned,
water grew thick with steamships and sewage
and the docks pushed east out into the marshes,
breaking the horizon with a forest of cranes
that unloaded meat, cloth, tobacco and grain
from countries that my school atlas still colours pink.

That the Thames once seethed with traffic and that London was once the biggest, busiest port in the world are not quite believable statements in the twenty-first century. The London Thames today is less an artery, more an interruption, a scenic feature rather than the city’s lifeblood. The docks have been transplanted downriver to the shores of Kent and Essex and the boats that worked Docklands and the Pool of London are almost all disappeared. Almost. One survivor is the Steam Tug (ST) Brent.

It’s been quite a voyage for the Brent, from its creation in a Sunderland shipyard more than seventy years ago, to its present semi-retirement on the Blackwater estuary by Maldon. The Brent was constructed in 1945 by William Pickersgill & Sons of Southwick, one of the TID steam tugs built quickly to a standard design for the Admiralty. But the war was over by the time she was launched. Deemed surplus, she was sold on to the Port of London Authority.

The Brent joined the Dredging Department of the PLA and was put to work on clearing mud, silt, and the unexploded bombs and mines that remained a hazard for shipping in the early post-war years. In 1960 she became a workhorse for the London docks. Remarkable as it may seem in retrospect, by the early Sixties London’s share of British trade by tonnage and value was higher than it had been in 1900. But change was coming, and at bewildering speed.

The rapid decline of London Docklands was driven by the opening of modern docks at places like Tilbury and by competition from European ports like Rotterdam. By the end of the decade it was all over, for the old London docks and for the ST Brent and her like. Though she remained in service for long enough to be the PLA’s last steam-driven vessel, in 1970 the Brent was sent to the ship-breakers, Stour Salvage Co at Mistley in Essex.

There she sat for ten months, waiting for the end. And from there she was rescued by Ron and Janet Hall (see here for the full story). The Halls lived on the boat while they restored her, eventually taking her out on trips back to London, to Chatham and even across the North Sea to the Netherlands. Here’s a film from 1984 of Ron, Janet and the Brent on a jaunt to Ipswich:

By the mid-Nineties the condition of her boiler meant that the Brent had to be laid up and by 2001 her hull needed repairs as well. In 2010 a Trust was established to manage her and in the same year she was added to the National Register of Historic Vessels, becoming just the third entry on that list.

And so to the present. The Trust is aiming to raise at least £100,00 to return the Brent to what they call ‘steamable condition’. One objective is to take her over to Normandy in 2019 for the 75th anniversary commemoration of the D-Day landings. The ST Brent may be an unremarkable boat, one of dozens built to the same design, but she is one of the few remaining links to the vanished world of the London docks, and for that reason, a treasure.