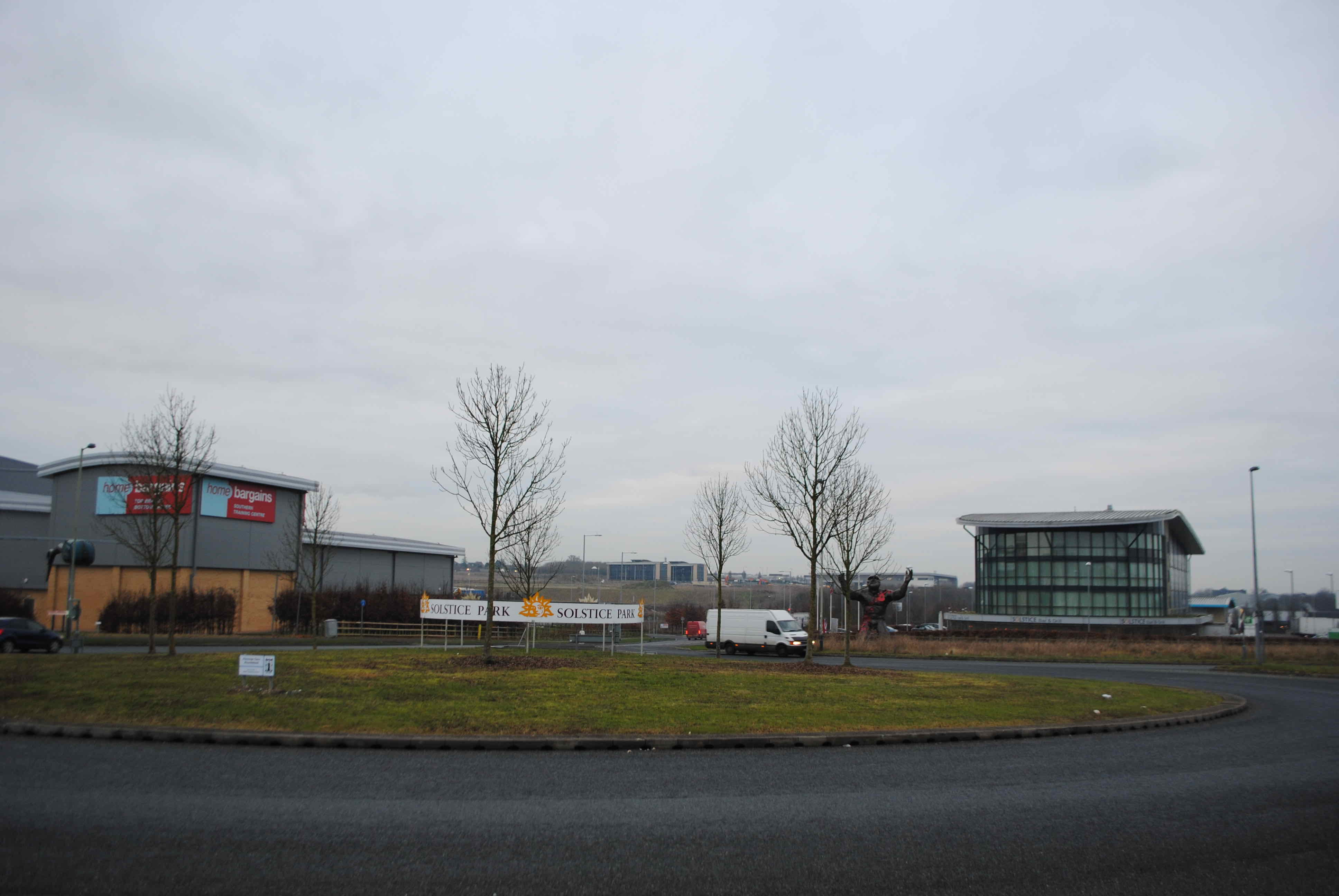 What do we call them, these hybrid, liminal places? ‘Parks’, it seems. ‘Park’ being a word that conjures nothing of their reality, their bounty and their dearth. Solstice Park, an outgrowth by the A303, erupting from the earth between the ancient town of Amesbury and the ritual landscape of Stonehenge, is one such place, part warehouse locus, part service station, part tourist stopover. Here, as a Victorian guidebook might have put it, the traveller will find rest and refreshment. And though that same traveller might long for some kind of authenticity: for the traditional pub, the cosy bed and breakfast, the family-run store selling local produce – this, after all, is Wiltshire – what they will find is the KFC, the Holiday Inn and the Co-op garage shop. As the Solstice Park website proclaims, this is ‘a strategically located development opportunity for: Industrial & Distribution, Trade & Roadside, Offices’. Or as one Google review has it: ‘Depressing soulless retail park, good fast food choice though.’

It’s a surprise, in this age of smart, irresistible marketing, how little Solstice Park trades on its proximity to the World Heritage Site just a couple of miles down the road. Other than its solar-pagan title and street names – Mid Summer Place, Solar Way, Equinox Drive – only the Harvester restaurant has made an attempt at historical resonance by naming itself after the Amesbury Archer. Otherwise the visitor could be anywhere. Which, of course, is mostly the point. The familiar brand logos have a totemic significance in what may be an unfamiliar landscape. Where are we? Er…somewhere in Wiltshire. But look, there is Costa Coffee, McDonald’s and Pizza Hut too. Solstice Park is ugly in form and purely practical in function, but comforting in its recognisable ritual. Park, rest, refuel, continue the journey. We could be anywhere but we know where we’re going. The replacement of road atlases with sat-nav has changed the experience of road travel: no need to look out for landmarks or orientate oneself in the landscape. Follow the instructions and the destination will be arrived at. Our civilization has achieved some dazzling things and none more so than in the realm of travel. Way stations like Solstice Park fit seamlessly into that experience. The ancestors would be amazed. And the Ancestor?

The Ancestor, a 20-foot-high steel sculpture built by Andy and Michelle Rawlings, was displayed at the 2010 summer solstice celebrations at Stonehenge before ending up in front of the Holiday Inn at the entrance to Solstice Park. This representation of an ancient human looking to the sky with outstretched arms is intended ‘to capture the very moment the sun comes up and he’s dropped to his knees in thanks’. Though it wasn’t commissioned for the Park, the sculpture has somehow found a place here, another nod and wink to the historical context, slightly absurd and wholly incongruous.

How is the world of supply-chain logistics and retail opportunities supposed to inhabit a historic landscape? Solstice Park is not an appealing answer but the notion of a massive heritage park is just as unattractive. The dearth of ambition in its design may be disheartening but the Solstice Parks of our age are necessary, just as the mills and collieries of a different age were necessary. Perhaps the neolithic bards complained about the blight of the Stonehenge development, just as Victorian aesthetes complained about their own scarred, industrialised landscape, and we moan about ‘bland’ retail developments. But in the world we have created for ourselves, we need places like Solstice Park.