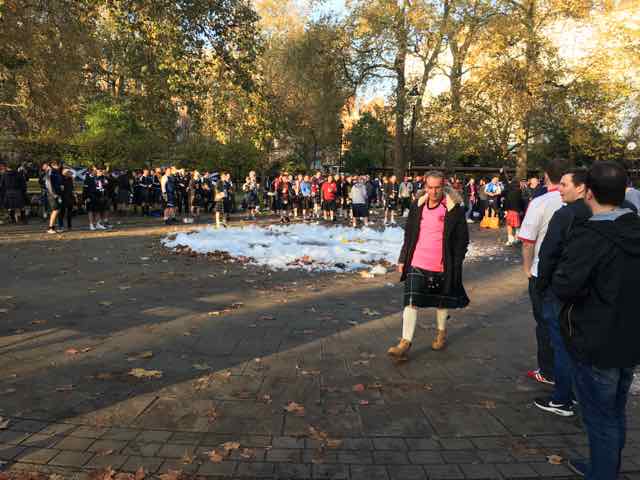 Base camp: Russell Square. The Tartan Army has taken control of the area and hoisted its flags. Detergent has been added to the fountain, footballs are being kicked randomly about and the banter and beer are flowing. Life in Bloomsbury goes on: no shops are shuttered, few police are visible and the natives seem calm. There are more kilts being worn than I remember from previous campaigns but the scene is more picturesque than threatening. I remember when the arrival of thousands of Scottish fans in London was an occasion for trepidation and a heavy police presence. The group I saw in Russell Square were good-humoured and fairly sober. They commandeered a delivery bike to pose for photos and gave a the rider a can of lager when they handed it back.

It is the oldest international football fixture in existence and the fact that it happens at all is testament to the ambiguous union of the British peoples. No other country in the world has four different football teams, and the England-Scotland match has always been the most keenly contested match between those nations. Anglo-Saxons versus Celts, and no doubt about who the Celts of Wales and Ireland support. But although the UK has a degree of devolution in the sporting arena that may be the envy of separatists from Catalonia to Kurdistan, as the political strain on the Union has increased in recent years, the sporting contests paradoxically seem  to carry less weight and significance.

The first official England-Scotland game, back in 1872, was atypical in that the eleven players fielded by the Scots all came from the same Glasgow club, Queen’s Park. 4,000 spectators paid a shilling to watch the game at Hamilton Crescent in Partick. Again atypically, the match ended in a 0-0 draw. After the Second World War, when the match was played annually, the rivalry through the 50s, 60s and 70s was at its most intense – and most bitter. When England won the World Cup in 1966 (a tournament for which Scotland did not even qualify), Denis Law, one of the great Scottish players of that decade, decided to play a round of golf rather than suffer watching the final on television. According to legend, when told that England had won, he exclaimed ‘Bastards!’ and threw his club away. Law and Scotland had their revenge a year later when Scotland beat the world champions at Wembley 3-2.

The match ceased to be an annual fixture after 1989 and the teams have met just five times since. Contrary to what might have been expected, the infrequent nature of the encounters has led to a lessening of emotional engagement and competitive ferocity. The contest is not the event it once was, and the national pride and tribal loyalty it provokes seem almost half-hearted.

Undoubtedly this reflects the decline of both team’s positions in international football’s hierarchy, but perhaps also that nationalism has other, more potent outlets. The rise of Scottish nationalism and the SNP has had the counter-intuitive effect of making the national football team less important as an expression of national identity – perhaps it would be different if they were any good. Likewise, the decline of English football in recent years (native football having less and less to do with the global jamboree of the Premier League) has coincided with the rise of the new English nationalism that led to Brexit.

Sadly, it seems likelier than ever that Scotland will leave the Union. And perhaps any revival of the significance of the England-Scotland match depends on Scotland achieving independence, an independence that will be in in large part defined by opposition to England.  Is that the shot in the arm the fixture needs? I hope not.