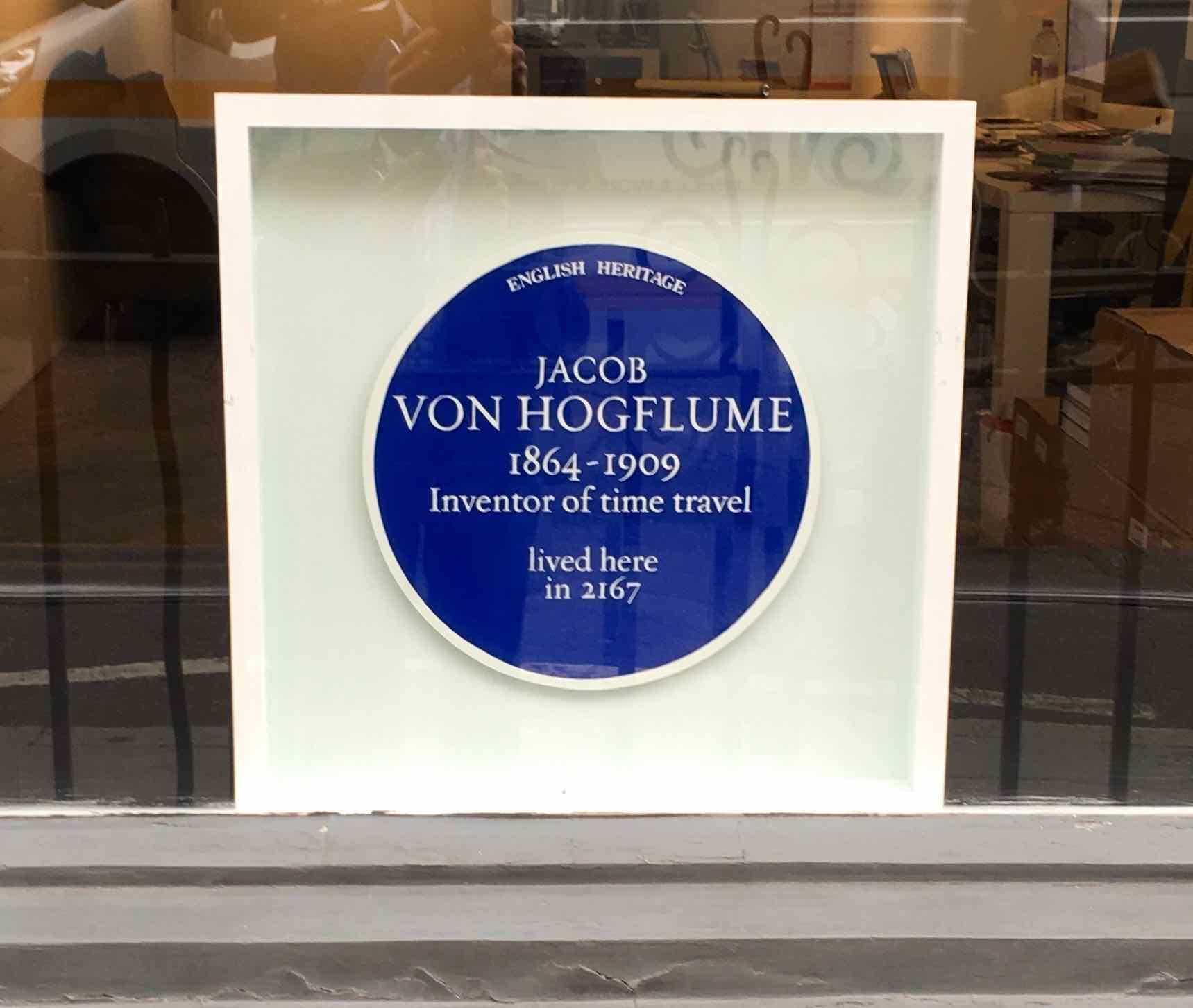 The darkness crumbles away.
It is the same old druid Time as ever…

(‘Break of Day in the Trenches’ – Isaac Rosenberg)

I was present when the blue plaque for Jacob von Hogflume was unveiled in Golden Square in 2012. Its removal and subsequent reappearance in the window of 18 Newman Street is a story that can be told another time (see, I have not been able to write two sentences without mentioning that mistress, Time, in each of them). It was a bright winter afternoon when half a dozen of us gathered for the commemoration.

Von Hogflume, to the great disappointment of everyone, had not given any indication that he would be there, or indeed that he even knew the ceremony was occurring. It was only when we were dispersing that I noticed a tall pale man, clean-shaven with a deeply lined face and what I can only describe as a shock of bleached blonde hair, slyly watching our group from an adjacent side of the square. I noted a combination of furtiveness and superiority in his expression as he pretended not to observe us. As soon as he realised that I had registered him, he hurried off down a side street.

My curiosity was piqued. I made some hasty farewells and followed him along Brewer Street, where he slipped into the Crown public house. I caught up with him at the bar and introduced myself, insisting on paying for his drink as well as my own. When I expressed my pleasure at meeting a friend of von Hogflume’s, he frowned but said nothing in reply. It was obvious that he was not going to explain who he was unless I did so first. I told him I was working on a PhD on speculative fiction’s influence on the science of time travel, that von Hogflume’s researches were central to it, and that I had been trying, without success, to contact him by leaving notes in places I thought he might visit in the future — and the past.

I also mentioned that my examinations of von Hogflume’s papers had led me to believe he was regularly updating and removing items in the archive, so that it was impossible for me to gain a full understanding of his work. I was grappling with a continual work-in-progress. This was both exhilarating and frustrating. I wondered aloud whether von Hogflume was actually playing a game with me.

The stranger smiled for the first time as I uttered this last remark. His change of expression, combined with an alteration in the light and shadow on his face, made me pause. The only known portrait of von Hogflume shows a young man with carefully combed brown hair and trimmed beard. And yet…

We sat at a table by the window and he began to talk freely. I give his words below as I remember them, which is not, perhaps, as he uttered them. But I am reasonably confident in my memory and on this occasion I was rapt.

‘HG Wells, JW Dunne, Max Beerbohm, Olaf Stapledon, all those imaginative writers about time, I knew them all. Or rather, I know them all. And Anuja Joshi, I know — will know — her too. Though at this point in space-time, I am yet to meet her. She is not even born. As you can hear, I struggle with verb tenses. I feel as if I am living in an eternal present in many ways, and yet the concepts of past and future still mean something to me. One of these days — though what use do I have for days now — one of these times, I will engineer an encounter with Wittgenstein in Cambridge, and ask him what he meant when he said that the limits of one’s language mean the limits of one’s world. Did he think for example, that until we found the words for it, time travel was not even theoretically possible? Do we, in other words, discover the laws of physics, or do we actually invent them?

‘Of course I have dabbled in events. One would have to have either superhuman restraint or angelic virtue not to — and I possess neither. In fact, I was responsible for — but no, I can’t tell you about that. Cause and effect have yet to unfold and if you knew, you might try to intervene. But let me give you another example. I tried to stop Isaac Rosenberg getting on a troop ship at Southampton in June 1916. I love Rosenberg’s poems and paintings — I will always love them, even when I travel back to a time when Rosenberg had yet to exist. I wanted to save him for humanity, to see him live a long, productive life. I actually took him by the arm and pleaded with him not to get on the ship, not to go to the trenches, to desert his comrades.

‘He thought I was crazy, a shabby-suited Cassandra, and the military police arrested me. That was a close shave, I can tell you. Locked up in an Army prison, with no identification: how the hell was I to get out? I had to feign madness and eventually they transferred me to a sanatorium in the New Forest. I absconded and got back to London but I might have been locked up for life and died back there. I learned my lesson. And besides, if I had stopped Rosenberg, I would have erased his war poems. Could I have lived with that? He might, after all, have fallen under a tram on Piccadilly Circus in 1917. Or he might have lived until he was seventy and never have written anything half so good.

‘I digress. You want to know how I solved the problem of time travel. Well, a large and reliable energy source is fundamental. In my early days of experimentation, the power came from a coal-fired steam engine. It produced enough energy to take me a decade in either direction. But hopping backwards and forwards ten years at a time did not satisfy my Promethean ambition. It was time-consuming and exhausting. You think jet travel is draining? You know nothing. I had to find a way to enable greater leaps, fifty, sixty, a hundred years at a time. It was my great good fortune to be able to follow the early researches into atomic power. I determined that a small-scale nuclear reactor would suit my purposes. Where could I get such a thing in the middle of London?

‘You will know that the Fifties was the heroic age of nuclear energy. Lots of government money sloshing around academia, light regulation, the thrill of the frontier. I befriended a scientist at Imperial College. Several of them were building their own small reactors, in labs and basements. Some of these machines are still there, will be there for years to come. They’re primitive things and nobody knows how to shut them down. Someone will figure it out in the future, they kept and keep saying, let’s leave it to them. Ha, ha, well I know how that one turned out. Not well, my friend, not well at all.

‘Of course I could intervene. I could sabotage the devices in the early stages so that they are never completed. But that would place limits on my work, my time travel — and heaven knows what other consequences might ensue. Heaven knows — do people still use that expression? But no, no more attempts at changing history by me. I learnt my lesson with Rosenberg — and with that other matter. I pursue my own researches and damn the rest of it. Another drink?’

[The blue plaque for Jacob von Hogflume was created by Dave Askwith and Alex Normanton, and is currently on display in the window of PICS, 18 Newman Street, London W1.]