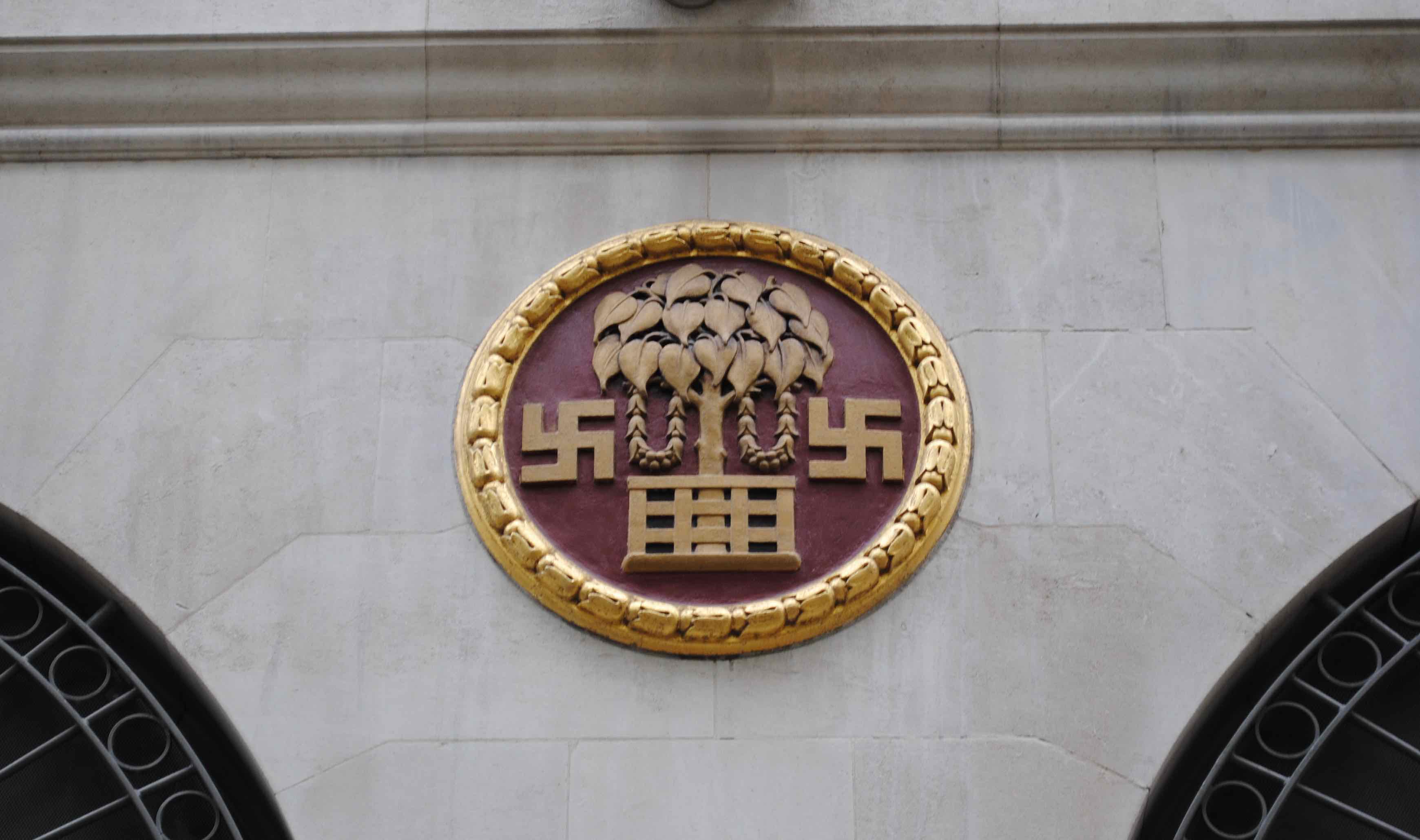 A symbol always transcends the one who makes use of it and makes him say in reality more than he is aware of expressing.

(The Myth of Sisyphus – Albert Camus)

If you happen to be walking past India House on the Aldwych, glance up at the medallions that decorate the exterior. One in particular might catch your attention. Swastikas over London? Yes, though this is not Nazi signage, but the ancient Sanskrit symbol of well-being. Of course the swastika was misappropriated by the Nazis as a symbol for their sinister, crackpot ideology, but its origins are hidden in the prehistory of Eurasia. Examples have been found on Neolithic and Bronze Age artifacts, and it was used as a decorative motif by the Ancient Greeks. The swastika recurs throughout the last millennium in Eastern Europe and crops up in surprising places in twentieth-century America: an attractive Coca-Cola swastika pendant, anyone? (A photograph of this pendant and other swastika art can be seen in Mukti Jain Campion’s article on the BBC website, which is an interesting survey of the symbol’s history.)

But its adoption by National Socialism has coated all these historic uses with a layer of poison. Indeed, so negatively charged is the swastika that in 2005 a group of German politicians tried to institute an EU-wide ban. They failed, amid opposition from symbol-sceptics, Hindus and others.  There were also practical considerations. How would the ban have been enforced, and what would have happened to examples like the India House motifs?  Or the Bronze Age Swastika Stone on Ilkley Moor in Yorkshire?  No doubt there would have been exceptions.  Context is everything. Nobody would view the Ilkley Moor stone as a proto-fascist monument. And though the Indian/Sanskrit usage could be seen by the ignorant as somehow associated with the (to me) mystifying popularity of Hitler and Mein Kampf in India, this would be plain wrong.  But whatever one thinks of attempts to reclaim or detoxify the symbol, its resonances in Europe are still disturbing, not to say terrifying. The psychic wounds, if not the physical ones, are still raw.

For another example of the potency of symbols and how their meanings can mutate, walk the half-mile down the Strand from the Aldwych to Charing Cross.  There, in a side street, you’ll find Maggi Hambling’s A Conversation with Oscar Wilde.  The sculpture invites the passer-by to sit and converse awhile with the spirit of Wilde.  The right hand seems to gesture, as if Oscar were reciting some witticism or other.  But there is something missing from those fingers, something that was there when the sculpture was unveiled, something that has been removed and replaced several times.  A symbol of relaxed bohemian conversation, of sophisticated sensual pleasure, but also, increasingly, of the death harvest of Big Tobacco.  A cigarette, in fact.  A cigarette that kept getting abducted.

Ms Hambling said, in a Financial Times interview some years back, ‘I’m refusing to replace it until Westminster Council puts a CCTV camera there.  The last cigarette was made of steel and must have taken two nights to saw through.  This one was made from hardened stainless steel by the people who made my sculpture in Aldeburgh – it must have taken several nights!’ The suspicion, though unproven, has always been that anti-smoking zealots are responsible.  And that would not be a surprise.  The symbolism of the cigarette has changed, or been augmented, significantly in recent decades.  When I was young it was still, just, a symbol of adulthood, freedom and even rebellion. Now it is more likely to be viewed as an indicator of poor education and life chances, an agent of industrial-scale death and disease, a symbol of the profit-before-people philosophy of the tobacco companies.

The cigarette may eventually become as freighted with diverse and contradictory meanings as the swastika.  And perhaps a tattoo of a cigarette inked onto the skin will become the ultimate in shocking body art, a symbol of death cults and of rebellion against the ideology of wellbeing.