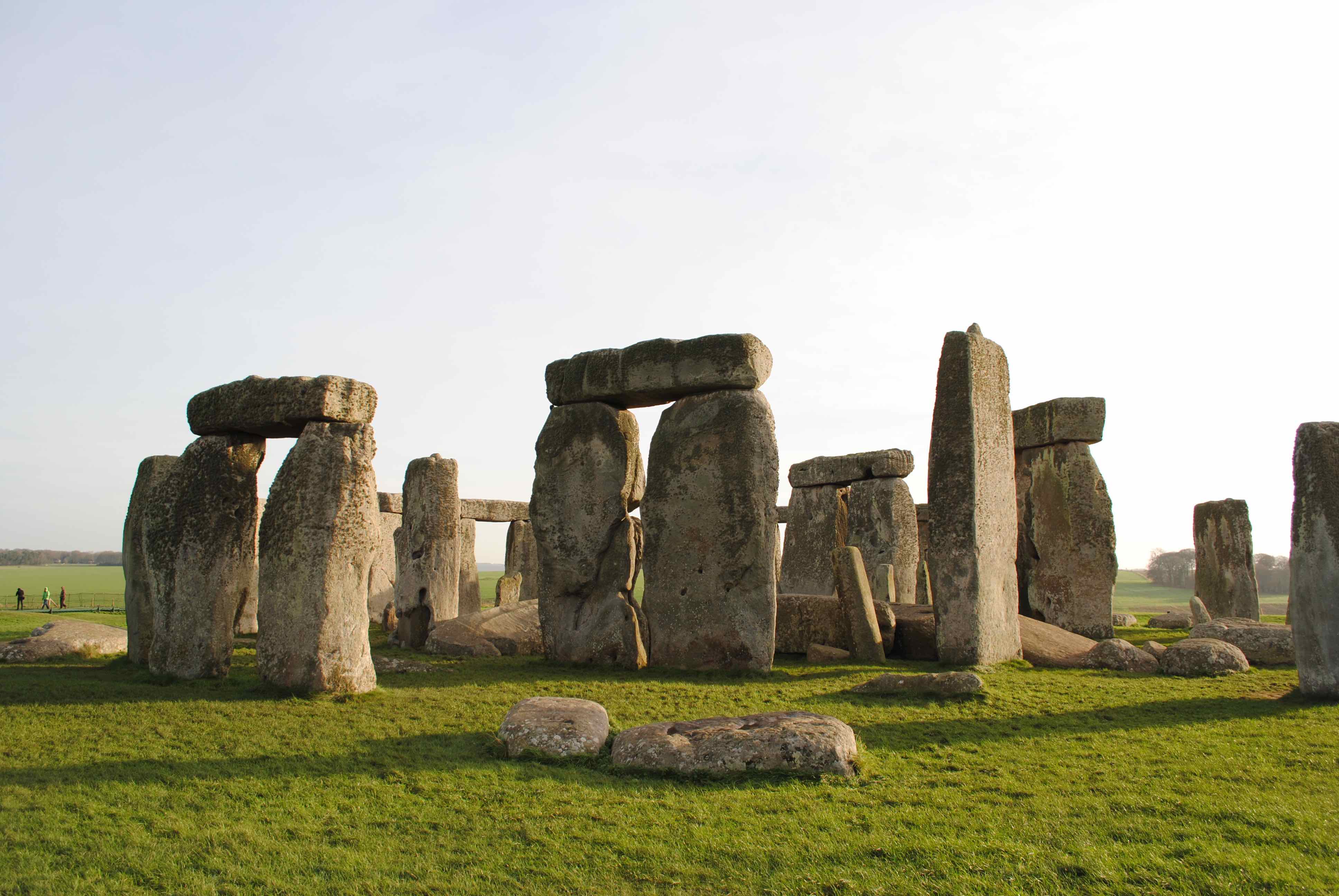 Lock themselves into snapshots on the steps
of monolithic bronze as if suspecting
the subtle mourning of the photograph
might later conjure in the memory
all they are now incapable of feeling.

On his way back from the 2014 NATO summit at Newport in Wales, Barack Obama made a surprise visit to Stonehenge. The president was helicoptered in to Boscombe Down airbase and then motorcaded to the site, where he was given a guided tour by an English heritage curator. I’d like to think that he was in flight when he caught a glimpse of the stones on Salisbury Plain and exclaimed, ‘is that Stonehenge? I’ve always wanted to see Stonehenge. Let’s stop off a while.’ But I doubt the visit was that spontaneous: the leader of the free world is a prisoner of his office. So what did Obama, that most articulate and eloquent of politicians, make of it? According to the report on the BBC website, ‘Mr Obama described seeing the monument as ‘cool’ and said it was something he could tick off his ‘bucket list’. I have no wish to sneer. I think that’s about as profound as most of us get when we visit this pile of stones. We want to see it for ourselves, but as much as we’d like to tap into the deep well of mysterious ancient Britain and experience some kind of imaginative time travel, once we’ve looked for a few minutes and taken our photographs (increasingly with self in frame) what else is there to do?

Of course, you can try to filter out the crowds – the bored kids, the selfie-stick couples, the fractious families, the weary Americans and Asians on their once-in-a-lifetime trip to England – and you can fix the image of trilithons and stone circles in your mind, you can close your eyes, and you can imagine…what exactly? History books, cinema and television shape the way that we experience, say, Hampton Court or the Tower of London. But there is no similar stock of common themes, images and motifs associated with prehistoric sites. which is why these visits often flounder in inarticulacy and end in disappointment. And also a reason why Stonehenge has been such a perfect backdrop for the projection of antiquarian and science fiction fantasies. (Not long ago I watched a daft film called Stonehenge Apocalypse on the Horror Channel. I knew it would be rubbish, and it was, but who could resist a title like that? I couldn’t.)

‘Stonehenge,’ says the English Heritage Guidebook, ‘was built as a temple – a place of ceremony, of burial and of celebration’. Yes, those ceremonies, burials and celebrations — what were they actually like? Archaeologists and historians of the present day try to understand monuments like Stonehenge as part of a topography, and talk of ‘sacred’ or ‘ritual’ landscapes. In his book Britain BC, Francis Pryor situates Stonehenge within a ritual landscape that is eight kilometres square, with the River Avon on its eastern side. The discovery of Early Mesolithic posts indicates that this was a sacred place four thousand years and more before the construction of the emblematic trilithons and stone circles.

In a gripping exercise in (pre)historical reconstruction, Pryor imagines what might have happened when Neolithic people gathered at one of these ritual landscapes, based on his excavations at Etton in Cambridgeshire.  He argues that ‘what went on within their boundaries was to formalise, if not actually create, a pattern of behaviour that would flourish in Britain and Ireland for at least three thousand years’.  The whole passage is too long to reproduce here, but this excerpt shows how detailed Pryor’s picture is:

‘At first light on the fourth day the families reassemble around the great circle of ditches. The women arrange themselves on the banks inside the circle, and the men on those outside. The children have been removed to a new campsite, hidden from the enclosure by a stream and a wood. The oldest and most senior family members stand on the flat ground at either end of the family’s ditch segment. At the centre of the enclosure a group of drummers are growing tired. Ever since the marking-out three days previously they have been beating out a slow, pulsating rhythm to keep the evil spirits away. The Mist of Souls has been a special place for as long as the oldest memories run. It is where the dead have been laid to be taken by the floodwaters in winter. It is a place close to the next world, the realm of the ancestors. There are quicksands that have taken the lives of many unwary hunters. It is a place of peace, but a place of pain, evil and danger too.’

Yes, this is speculation, but it is informed speculation, based on a deep knowledge of prehistoric Britain and years of excavating Neolithic sites.  It might be too outré for an English Heritage guidebook but such imaginative reconstruction does help the visitor look at Stonehenge, Avebury and the rest as sites of meaning and ritual rather than as blocks of stone decorating the landscape.