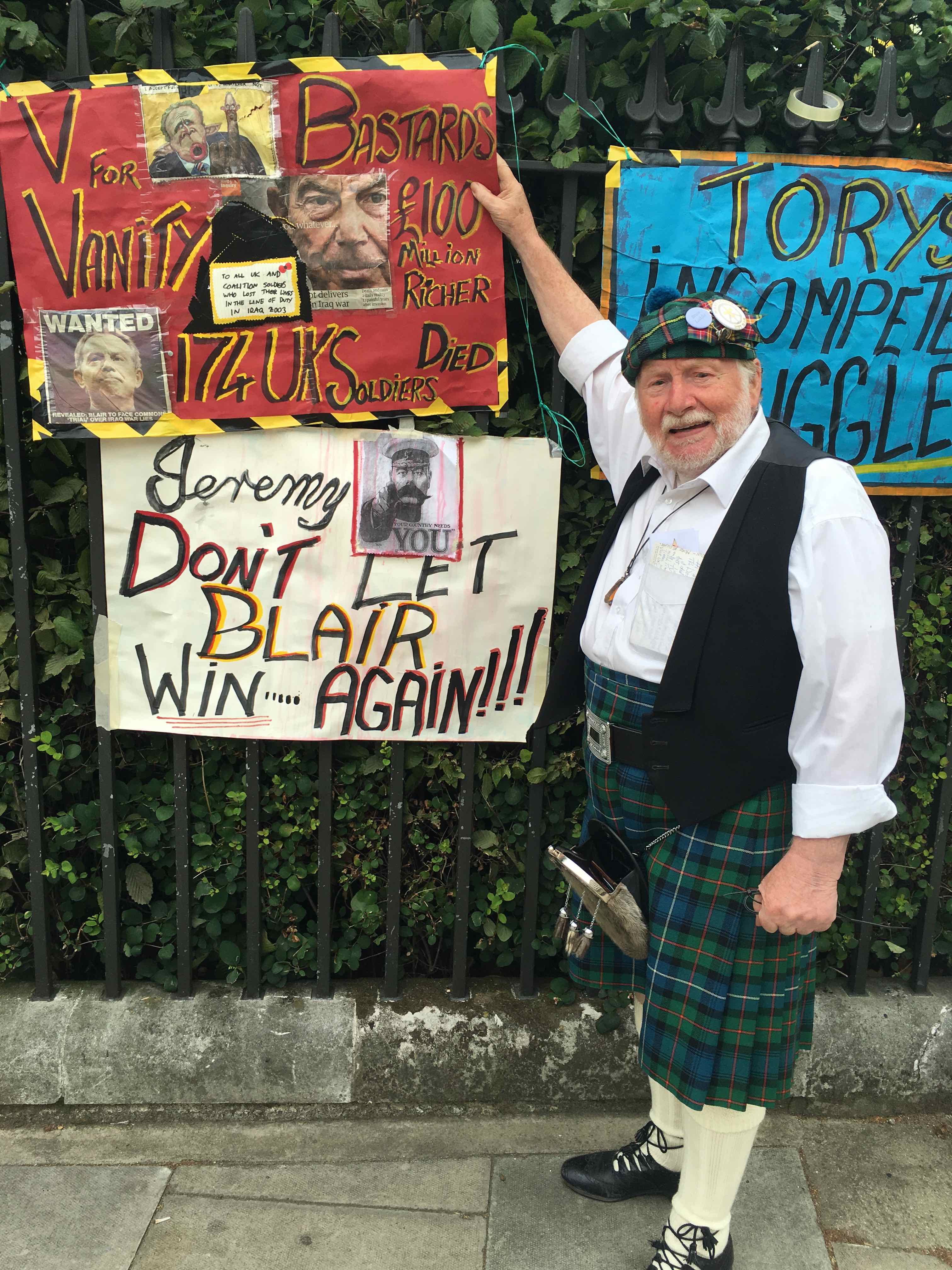 A Scotsman may tramp the better part of Europe and the United States, and never again receive so vivid an impression of foreign travel and strange lands and manners as on his first excursion into England.

Harry, aka Echan O’Fechan, has come down from Edinburgh and booked into the Imperial Hotel on Russell Square. Across the road from the hotel, by one the of the gates of the square’s gardens, he has set up a one-man protest camp. He’s there from early morning to late in the evening and then goes back to the Imperial to have a hot bath and rest up in preparation for the next day’s protesting. He gives me one of the leaflets he had printed and distributed for the EU referendum campaign. It reads:

Thoughts to ponder
There are certainties in life.
20th June 2016
We will all die. An absolute certainty.
You will pay tax. Unless you are very rich or very poor, VAT will get you, unless you are on expenses.
You cannot please everyone. Try? Not attainable.
There will be change! Inevitable progress means change.
Return to ‘Good Old Days’ Were they? really [sic]. Anyway Gone forever.
Evolution has done a good job. So far.
The world and all its systems have done well over many millenia [sic]. But mankind enters and evolution and systems are disturbed. Drought, floods, storms, forest fires, snowstorms, wars, migrations. mankind’s effects on our planet earth.
President Obama recognises and is concerned about protecting National Parks Systems in U.S.A. particularly Yosemite in California, & Yellowstone Park in Montana. Can you imagine a world with President Trump and Prime Minster Boris Johnson.
Nuff said!!!
Echan O’Fechan, Largs
2 Days to Referendum – Vote on Thursday

Harry loathes New Labour and the Tories in general, and Tony Blair and Boris Johnson in particular. He thinks Jeremy Corbyn is a good, honest man. He tells me he voted for Scotland to leave the United Kingdom and for the UK to remain in the EU. I tell him I think that the Scots and the English are family and that we should stay together. He responds that we’re more like an old married couple whose divorce is long overdue. Far from being a romantic nationalist, he tells me that the HSBC Bank was founded by Scotsmen who’d engineered the Opium War with China and the subsequent colonisation of Hong Kong, and we agree that many Scots were enthusiastic participants in the British Imperial enterprise. He quotes Samuel Johnson’s quip that ‘the noblest prospect which a Scotchman ever sees, is the high road that leads him to England’.

I ask Harry how long he’s in London for and he tells me he’ll stay until his money runs out. We shake hands and I wish him well. Before I go, he gives me a handwritten photocopied sheet. On one side is a poem by a friend of his, now dead. It reads:

Farewell to Old Labour
Farewell to Old Labour, from Shetland to Dover
The Lawyers and Con men have taken us over
No longer the Worker, his hand on the Rudder,
He watches and fears with each growing shudder
The Ranks are now filled with the Divine and Sublime
Who’s antics will always make an easy Byline
What a sell out of Principles
What a perilous State
When – TONY APPROVED is your next candidate

On the other side is:

It’s comin’ yet
for a’ that
That Man to Man
the World oer,
Shall Brothers be
for aw that.