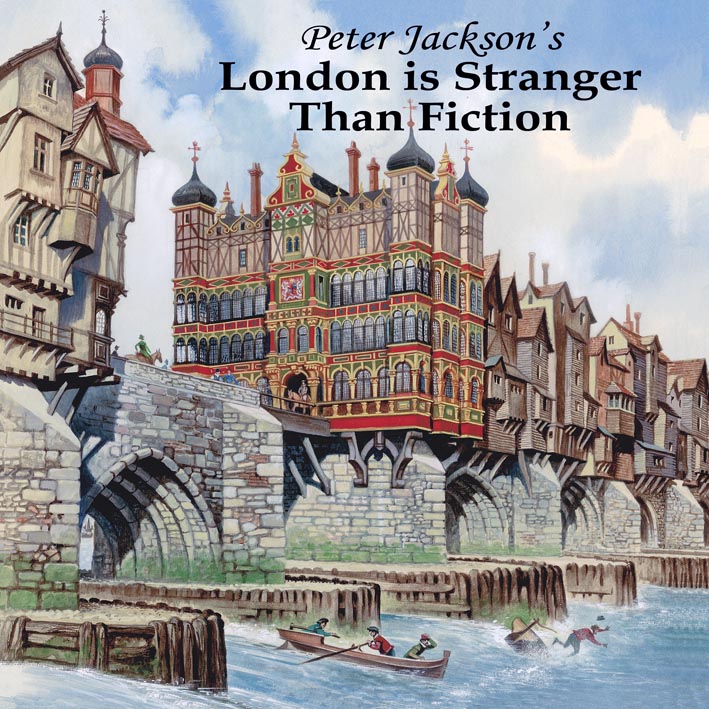 One day at primary school when I was searching the classroom cupboard for something – glue or tracing paper or perhaps even an escape route – I found a book of comic strips on one of the shelves. I opened it on a page which showed a pane titled THE UNSOLVED MYSTERY OF SCOTLAND YARD. The accompanying illustration showed a bearded head with dead white eyes and  the kind of face that appears in nightmares. The rest of the text read: IN THE ‘BLACK MUSEUM’ IS A PLASTER CAST OF A MURDERER’S FACE – WHICH HAS GROWN WHISKERS! ALL THE EXPERTS OF SCOTLAND YARD HAVE FAILED TO SOLVE THE MYSTERY. I had never heard of this ‘Black Museum’ before. Was it, like the British Museum or the Natural History Museum, a place accessible to eight-year-old boys?

I had been given a glimpse into a previously hidden world, a world in which strange phenomena were real, attested and documented in comic strips. I was hooked. I asked my teacher, whose book it was, if I could borrow it. That evening I read it from cover to cover and back again. Several obsessions sprang from that encounter.

The book was a set of reprints of Peter Jackson’s comic strip London is Stranger Than Fiction, which appeared in the Evening News from 1949 to 1951. Jackson was only twenty-six when he got the job after submitting a few drawing to the newspaper’s editor, who wanted to introduce a strip similar to Ripley’s Believe It or Not. He went on to produce two other London-themed series for the paper, London Explorer and Somewhere to Go.

Though the London is Stranger Than Fiction strips are primarily concerned with history, with past people, events and places, they also include a rich cast of then-living Londoners: Mrs Molly Moore of Camdenhurst Street who has been ‘knocking up’ her neighbours with a peashooter for over 30 years; Mrs Violet Way of Bromley-by-Bow, who distributes farthing packets of toys to local children passing under a wooden arch inscribed ‘Enter all ye children small. None can come who are too tall; ‘Bulky landlord Len Cole’ proprietor of the smallest pub in London, the Nag’s Head in Kinnerton Street; Conductor Sweeney of the 53 bus route, who was once of Master of the Household to a Russian princess; Mr John Fain of Love Lane, who makes the flat-topped leather hats that Billingsgate porters wear to carry boxes of fish on their heads; Mr David Taylor, the Button King, who ‘keeps a little shop in Berwick Street’ crammed with 30 million buttons of all colours shapes and sizes; and Fred Brasil, ‘London’s very own Father Christmas’, who lives on the pavement of Eagle Place.

The contemporary London portrayed in Jackson’s series has barely recovered from the war. References to buildings erased during the Blitz are common. The pall of loss and austerity hangs over the city.  Around 20,000 Londoners have died in the Blitz, food and petrol rationing won’t end until the Fifties, and reconstruction has yet to commence. Yet there is humour and optimism. London and most of its people have survived: London has taken it.

More than half a century on and time has changed London as irrevocably as the Great Fire and the Blitz did. Jackson’s eccentrics and practitioners of odd trades are gone, as are most of the quirky customs and curiosities he describes. It’s an irony of history that despite the freedoms and opportunities of our current age, the London of today appears deeply conformist in comparison with the city portrayed by Jackson.  The London of the mid-century imagination has been demolished, reconstructed and is barely recognisable.  And I still haven’t been to the Black Museum.

PS All the London is Stranger Than Fiction and London Explorer strips have been collected and published a single volume by the Look and Learn Historic Picture Library. Individual strips can also be purchased from the Look and Learn website.