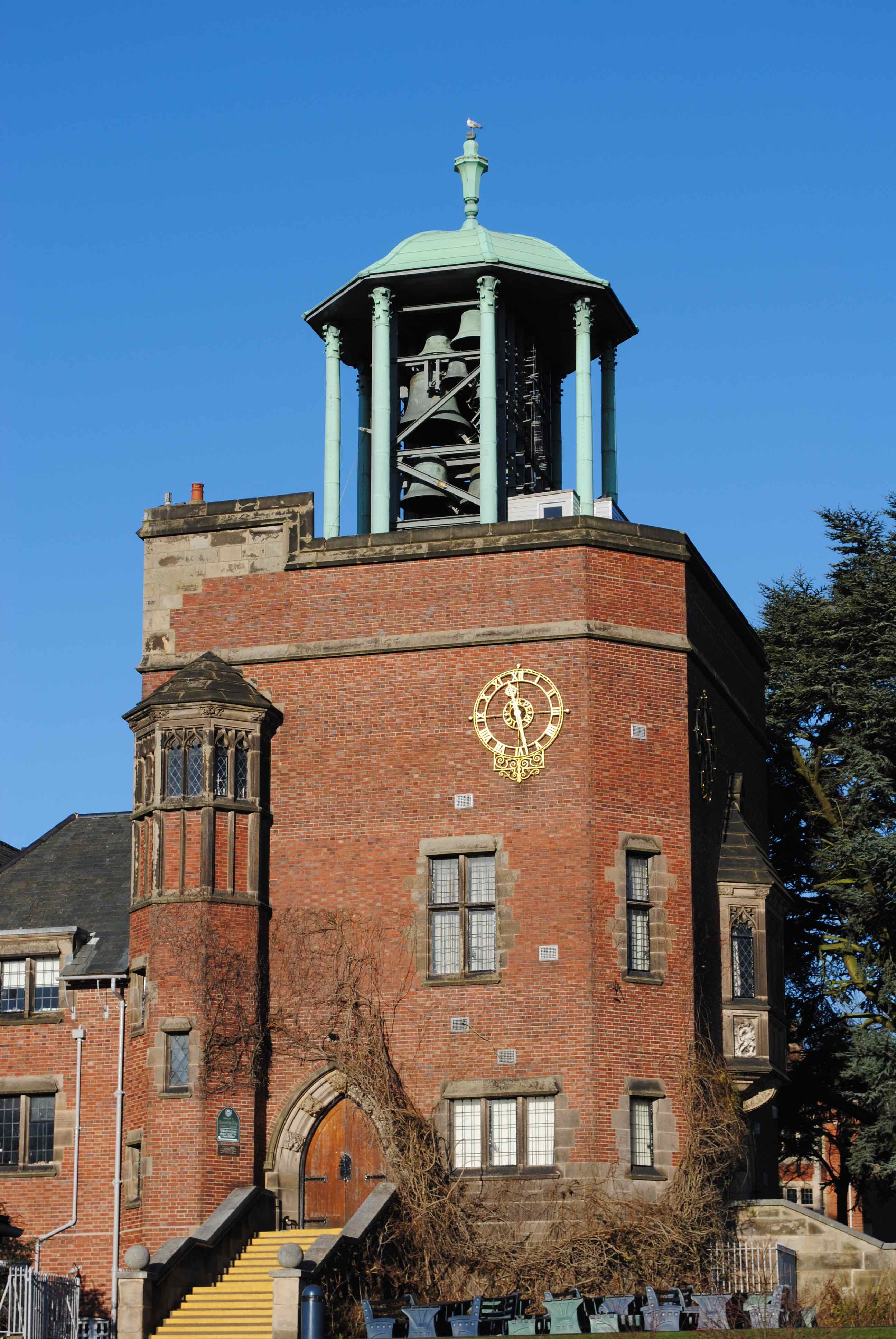 In 1906, George Cadbury, visionary industrialist, chocolate magnate and founder of the remarkable model village Bournville, visited Bruges in Belgium. While there he heard the famous carillon of the Belfry of Bruges and decided, there and then, that Bournville should have a carillon too. The Cadburys were a Quaker family, which meant the village had no pubs. There were sports facilities aplenty to keep the Cadbury’s workforce occupied in their leisure time but man and woman cannot live by ball games alone.

As well as the pleasure it would provide to the inhabitants of Bournville, Cadbury saw the carillon as a potential source of civic pride for the village. On his return to England, he commissioned John Taylor & Co, a bell foundry in Loughborough, to produce twenty-two bells, which were installed in the belfry of the tower attached to the village school. Over the years another twenty-six bells have been added, cast by Gillette and Johnson of Croydon, who also replaced most of the original bells as they deteriorated over the years.

The carillon originated in the Low Countries and in addition to the bells, the instrument comprises a keyboard of ‘batons’, wooden levers which are pressed with a closed fist, and pedals for the heavier bells. The batons and pedals are attached to the bell clappers by wires. At Bournville this machinery is housed in a cabin beneath the belfry, reached by a tiny spiral staircase. The person who plays a carillon is called a carillonneur. I have seen Bournville’s carillonneur, Trevor Workman, play and what struck me about the performance was not only the skill and coordination involved, but the sheer physical effort required to strike the batons in the correct way.

The forty-eight bells weigh a total of 17.5 tons. The lowest in tone, called the bourdon, is 3.4 tons and the smallest treble bell is 12 lbs. Together, the Bournville bells have a range of four octaves, providing the musical resources for concert performances. Music for the carillon must be specially composed or arranged: as well as the constraints of playing the instrument, foundry bells have unique harmonic characteristics which can sometimes result in the bells sounding slightly out of tune even when they are tuned correctly. Listening to a carillon is a unique musical experience, and the sound is much more fluid and expressive than that achieved through standard bell ringing.

The company paternalism that gave rise to the carillon, to Bournville itself, and to other model villages built but by other magnates, is long in the past. And this is no bad thing: better to have achieved democratic equality than to be dependent on the largesse of a plutocrat, however enlightened. Yet one can’t help but admire the drive of George Cadbury and his desire to improve the lives of his workers, to provide them with housing and parks, schools and churches, libraries and music. But no pubs. A very Quaker utopia. The carillon at Bournville is just one component of his impressive legacy.