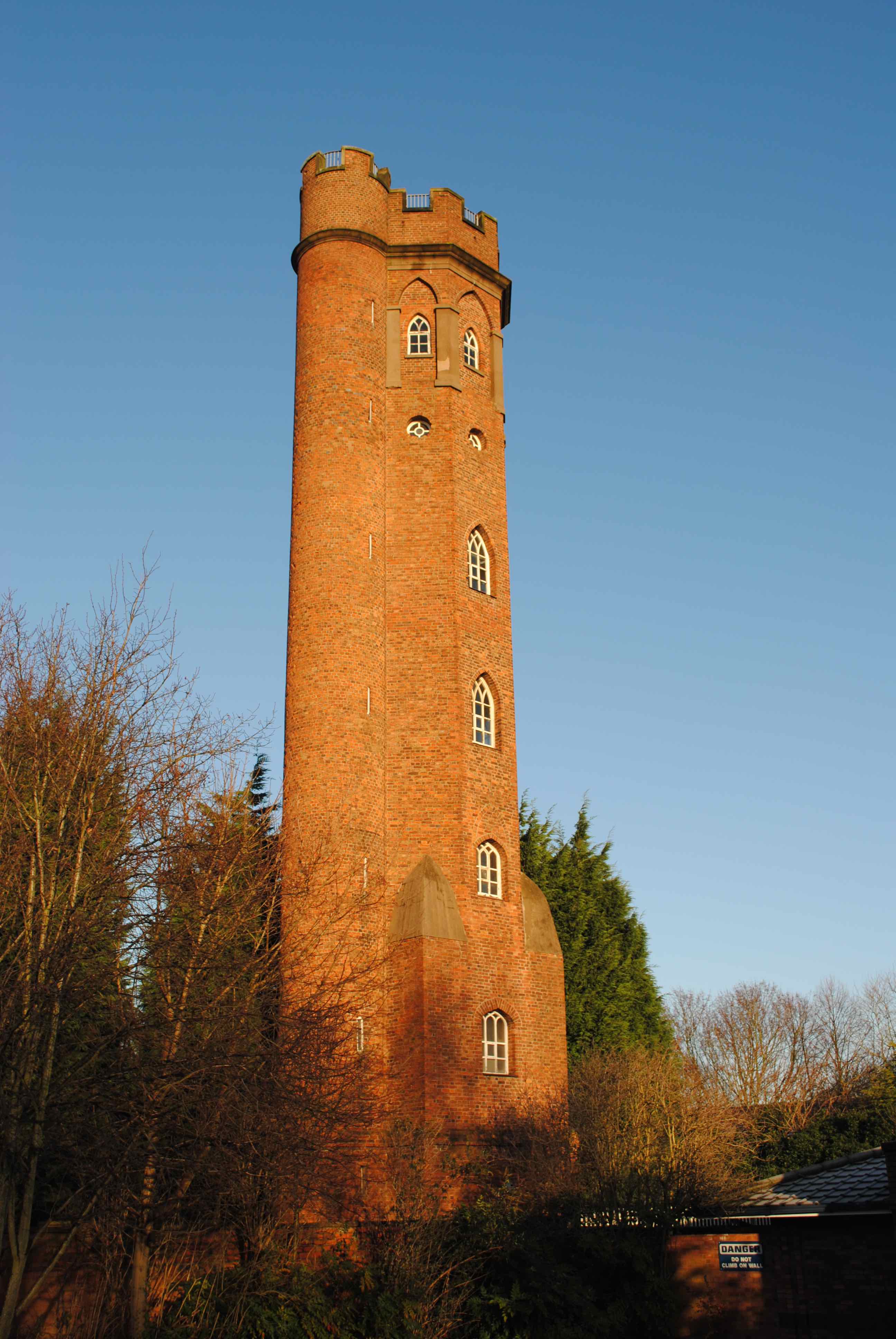 They passed through the ruined tunnel and stood upon a heap of stones, gazing at the dark rock of Orthanc, and its many windows, a menace still in the desolation that lay all about it.

Perrott’s Folly, also known as The Monument, stood in open parkland when it was constructed in 1758, at the behest of a local man, John Perrott. Perrott was both wealthy and eccentric, a combination that seems to occur more frequently in the eighteenth century than in any other. Built in a Gothic style, designed by an unknown architect, the octagonal tower is of red brick and has six storeys, with the windows on each level in a different design. Unknown too is its original purpose. It was certainly a monument to status, and possibly used a hunting lodge. One tale has it as a vantage point for Perrott to view his wife’s grave, some fifteen miles away. As Edgbaston became absorbed into the sprawl of Birmingham, the parkland was covered in brick and stone, and the tower became hemmed in, to the point where it is now fenced into an absurdly small rectangle of grass, surrounded by later buildings.

Along with the nearby tower of the Edgbaston Waterworks, Perrott’s Folly is said to have inspired the Two Towers of JRR Tolkien’s The Lord of the Rings. Tolkien’s parents were Brummies and though he was born in South Africa, the family moved back to Birmingham when he was three years old. He lived in several houses in the city and its suburbs, including one in Edgbaston, until he went up to Oxford University. As far as I know, the evidence for the Two Towers inspiration is circumstantial, and Humphrey Carpenter’s biography of Tolkien has nothing to say on the subject. But on his way to and from school, the young Ronald Tolkien would have often looked up at those two towers silhouetted against the grey Edgbaston sky. Describing its creation, Tolkien said that The Lord of the Rings had grown ‘like a seed in the dark out of the leaf-mould of the mind: out of all that has been seen or thought or read, that has been long forgotten, descending into the deeps’. These ‘said to have’ and ‘rumoured to have’ stories are often tenuous but it doesn’t seem improbable that the two Edgbaston towers were crumbled into that leaf-mould.

Perrot’s Folly was used as an observatory during the nineteenth century and then began its gradual decline into near-collapse. The Birmingham Conservation Trust carried out emergency repairs in 2005 and the tower was bought by the charity Trident Reach in 2013 – for £1. The charity is aiming to raise a million quid to turn the place into a community hub, an ambitious undertaking in the current economic context. The interior is in a poor state of repair, with one floor missing, and so is rarely open for visitors. The restoration project has its own website, though this is singularly uninformative about the plan and progress of the scheme.