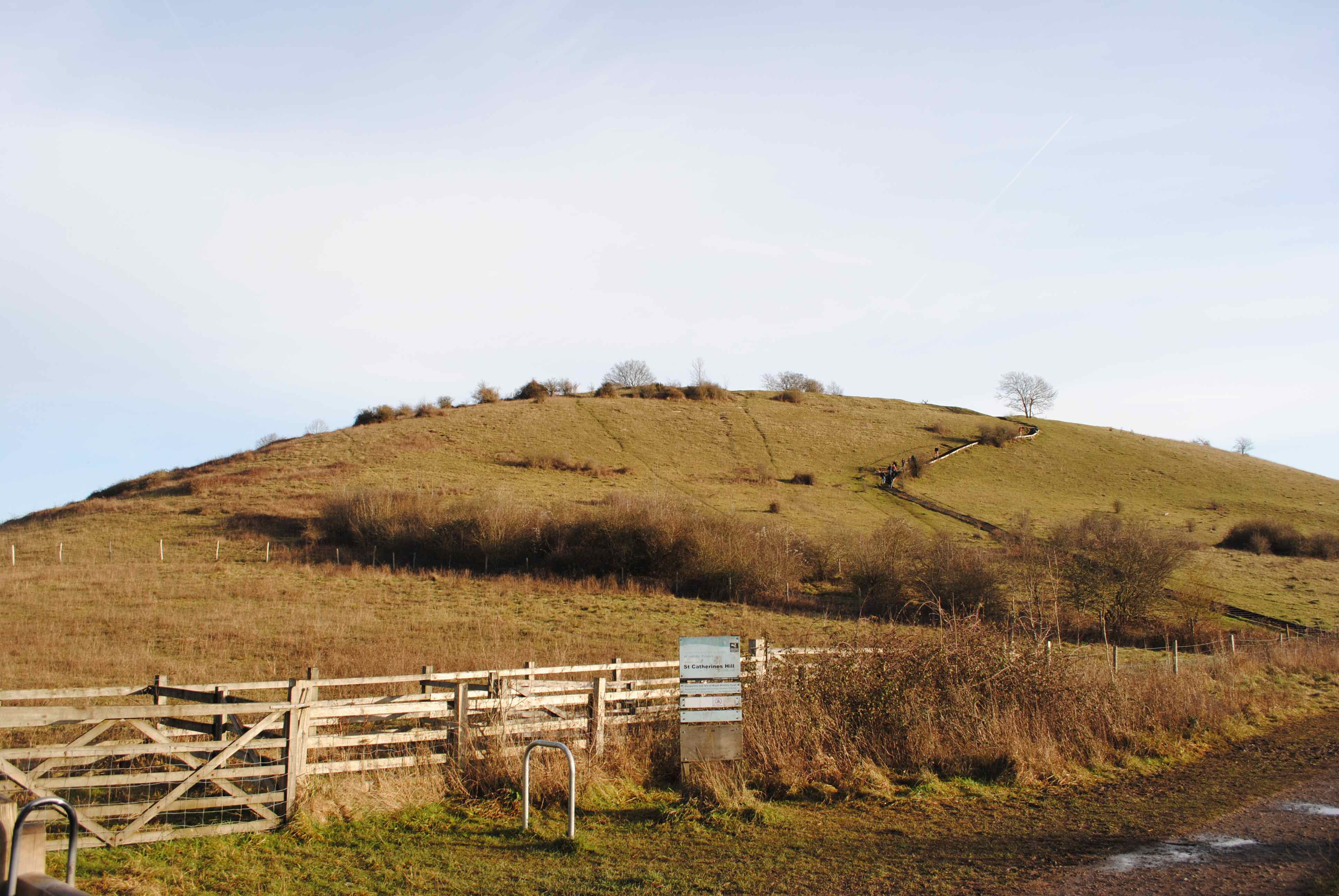 Lightly she scoops up
the city in her arms.
Even the winter sky
shares her mood, as it cracks,
scatters silver
over watermeadows,
strikes gold
from the Hampshire hog
of the Castle weathervane.

There are several hills in southern England named for St. Catherine of Alexandria, one of the most venerated saints in the medieval Church, held in high esteem for her intercessory powers. This one on the edge of Winchester was formed, like all the chalk lands of this region, by the geological processes of the Late Cretaceous epoch. Millions of years later its position, with commanding views over the adjacent downland and the River Itchen valley, led Iron Age tribes to settle here and eventually build a huge fort at the top. The original settlement has been dated to 550-450 BC, with the hill fort constructed around 250-200 BC. Does this indicate an increase in hostilities during those intervening two centuries or the growth of social organization and a collective will to power? Perhaps those causes went hand in hand. The fort’s ramparts and outer ditch are well-preserved, though the wooden guardhouses and palisades must be imagined. For some reason the site was abandoned around 50 BC. Had they known the Romans were coming the Iron Agers might have held on to it.

The next people to leave their mark were the Saxons, who used used the ramparts as a burial ground. And in the eleventh century a chapel in the Norman style, dedicated to St. Catherine, was built at the summit. This was destroyed in 1537, when the Reformation’s zealous agents were systematically erasing saints’ chapels, shrines, and other Catholic signifiers. The remains of the chapel are still there, buried beneath the beech trees, known as The Clump, that crown the hill.

On the level ground within the ramparts is a mizmaze, or turf labyrinth, one of the eight that survive in England. This one is thought to be of seventeenth-century origin, and the story goes that it was designed by a badly behaved student from the nearby Winchester College, who’d been banished to the hill during the summer vacation. To pass the time he laid out the maze and cut the turf. Having completed this task, he went and drowned himself in the Itchen. I’m not sure what the moral of that story is, or indeed whether it has any veracity.

A more esoteric take on the hill came from an author called Guy Raglan Phillip , who claimed that the hill is a significant point on Britain’s longest ley line, the Belinus Line.

Modernity intrudes from a distance, when the drone of traffic from the M3 motorway, which cuts along at the foot of the hill’s eastern side and was as monumental an undertaking as the Iron Age fort, occasionally reaches the visitor. Nowadays St. Catherine’s Hill, though owned by Winchester College, is a nature reserve managed by the Hampshire & Isle of Wight Wildlife Trust, with British White cattle grazing. As much palimpsest as landscape, this is a place where the ages co-habit, and where a succession Britain’s peoples have imprinted their culture on a chalk hill.

Hospital of St Cross and Winchester from St Catherine’s Hill