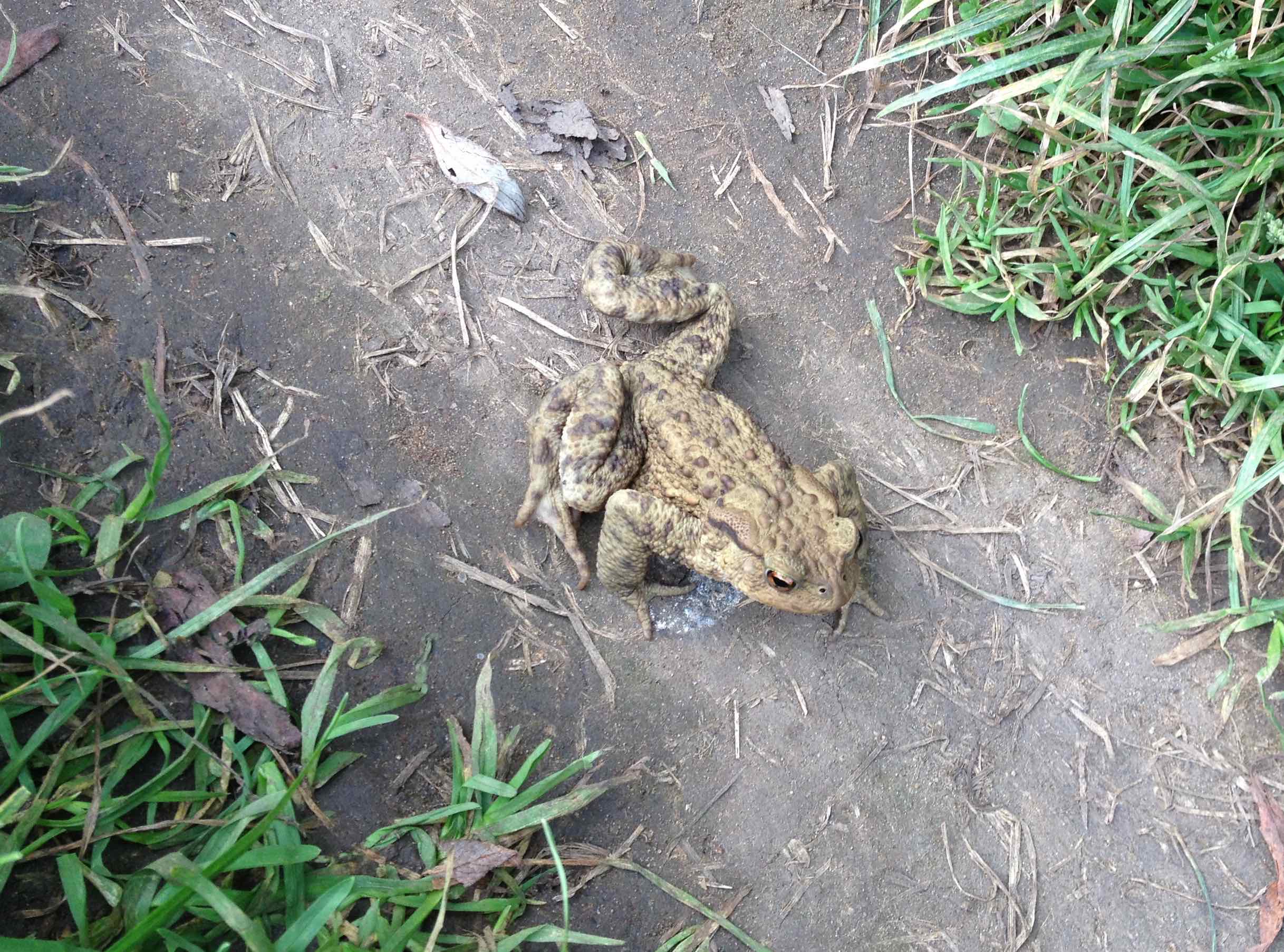 We are far too busy
to be starkly simple in passion.
We will never dream the intense
wet spring lust of the toads.

There are only two native toad species in Britain and one of these, the Natterjack Toad, is rare, confined mainly to a few coastal sites. So the chances are that if you come across one in the wild it will be a Common Toad. I met the one in the photograph on a bank of the River Wey, between Guildford and Woking. She – I think it was a female – was sitting right on the towpath used by cyclists as well as walkers, and stood a fair chance of getting squashed. I picked her up – how thin her skin felt, how fragile her tiny bones –  and put her closer to the river, out of harm’s way. She waited a moment or two and then heaved herself under the grass. There was something impressive about her imperturbability and lack of hurry, and I got a strong sense of how solid and fearless these creatures are. It’s no surprise that toads can live for up to forty years.

Folk biology distinguishes between frogs and toads, and in European cultures toads were regarded with more fear and loathing than frogs. Viewed as poisonous creatures and carriers of disease (and warts), like frogs they could also act as witches’ familiars, their metamorphosis from aquatic tadpoles to semi-terrestrial adults signifying a supernatural potential for bodily change. But the perceptions weren’t all negative. Toads are used symbolically in alchemical texts – that metamorphosis trope again – and in his 1608 History of Serpents (frogs and toads being classed within the reptilian family), Edward Topsell referred to the toad as the ‘most noble kind of Frog, most venomous and remarkable for courage and strength’.

I pinched that Topsell quote from Charlotte Sleigh’s book, Frog, a dense and entertaining survey of frogs and toads through natural, scientific and cultural history. Taking her lead from scientific biology, which recognises no distinction between frogs and toads and treats them as members of an overarching Anuran order, Dr Sleigh uses the terms ‘frog’ and ‘toad’ interchangeably for large parts of her book. This leads to one or two jarring moments, as when she refers to Mr Toad from The Wind in the Willows as a frog. Toad of Toad Hall would be outraged by that usage. Still, the reader of Dr Sleigh’s book is left wondering why toads have received more hostility than frogs in the past. Even in the fairy tales, princes are turned into frogs, and not toads. I wonder if their means of locomotion could have something to do with it. Frogs hop and leap, and appear livelier than their cousins, who simply walk – and squat. That word ‘squat’ is invariably linked with toads, reached for almost automatically by poets like John Milton and Philip Larkin. Toads squat and they stare. Frogs are too busy leaping off to catch your eye.

Just as I left this River Wey toad behind, a cyclist came hurtling along the path. I asked her to watch out, just in case it had wandered back on the path. She smiled and nodded, looking at me as if I might be the self-styled head of the local toad cult i.e. completely bonkers. And as she rode off, at roughly the same speed at which she’d arrived, I thought that, yes, Anuran-like, my own metamorphosis into eccentric busybody was complete.